I've only very recently started to learn about music theory so forgive me if this is a stupid question.

I was playing around the guitar and was very fond of the following chord progression: Emaj7 - Em7 - A

But I couldn't figure out which key I was in. I have seen a Rott major and minor key in the same progression before but I don't really understand why it actually sounds nice.

Thanks for your help :)

Based on your comment on the timing and having A7 instead of just A I hear it as E tonality, parallel major and minor. The A7 is more of a IV chord rather than having a dominant function, kind of like the IV chord in a blues.

As to why it sounds good, who can say? Maybe it’s going from happy to sad to bluesy. I personally like it a lot and it’s a time tested harmonic device. “While My Guitar Gently Weeps”, “Norwegian Wood” and the old standard “I’m Glad There Is You” all use this tonic major/minor contrast to great effect in one way or another.

There is no one key for that progression. It could obviously be E, or A, but with nothing else around - before or after, it's impossible to tell. Just in isolation, a way to give a clue is to let one chord ring out, and make it sound like the final one. If it does, then as far as you're concerned, that's the key. Inconclusive? Read from the start again...

It looks like you have modulated. The E Maj7 would typically belong to either E or B. A is the 4th of E, if E was serving as the 5th of A I'd expect E7 and not E Maj7. It is common to resolve from the 4th to the key by going to the 4-minor. So the E Maj7 --> E-7 in my ear would make me expect to hear B, rather than A.

But if what you played sounds cool, then it's cool. Play it. Like Tim said, there not a key for it. Whatever "key" you determine it to be in there will be "accidentals". Keys are useful but a lot of great music does not adhere to a specific key.

Now that we have an accepted answer, I can add my own opinion. 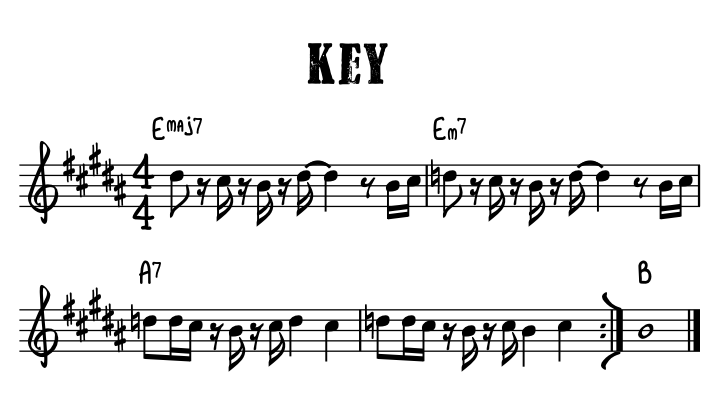 Not the answer you're looking for? Browse other questions tagged scales chord-progressions or ask your own question.

3
How can I learn the theory behind chord progressions?
3
What key could the progression Dmaj7-Amaj7-A6-Esus4-E be in?
6
Theory behind I iii IV V
4
Help with determining the key signature of a new song that I am writing
2
Determining roman numeral notation
2
Understanding Cm7-F7-F#Maj7-G# progression
2
What is the music theory behind substituting the IV chord in a I-IV-V progession in A for a G7 instead of D?
0
Why does this chord progression work? I feel like I've heard it before but can't find the pattern
4
Why does G-Major work well within a C-Minor progression?