I play piano, and when I am playing a gospel or a blues song, I always improvise with my right hand. I have been practicing major scales and pentatonic scales for a while now, and when I play, i usually just play the scales up and down the keyboard. It does sound good, and I switch the scales with the modes and stuff, but how can I break out of this habit and explore new stuff with them?

Three things you can add to playing only chord tones are auxiliary tones, passing tones, and enclosures.

The enclosure example shows enclosures targeting each tone of a major scale, but you can use an enclose to target chord tones.

All three can be modified in various ways...

If only the various figures for auxiliary and passing tones are used, it will provide for lots of interesting lines. The nice thing is it's easy to remember the basic approach: focus on the broken thirds that make up chords and either: play a chromatic auxiliary tone under it, or fill it in with chromatic passing motion.

Those examples show only swing eight notes, but you should try playing other rhythm patterns too, things like syncopated quarter notes, and triplet figures. Start figures on or off the beat for variety. You can omit a note hear or there to suite the rhythm.

When you put it altogether you can get lines like these... 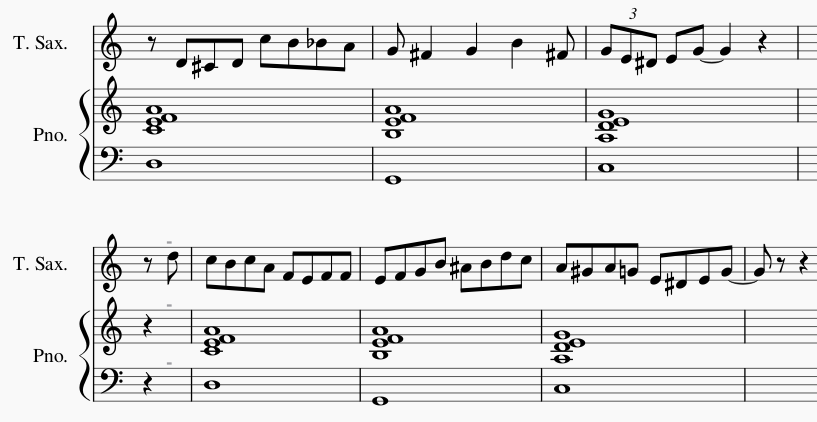 ...of course those could be adapted to solo keyboard.

Since you're familiar with scales, keep practicing them, but in different patterns

Learn riffs, and licks. Try developing a set of these by listening to other's and transcribing their work. Scales and arpeggios are the foundation of melodies, some might say the interval is the foundation of melody since that is more primitive than a scale (which is a sequence of intervals). Rhythm is an important part of melody as well. So playing fragments and letting in some space could help break that habit.

There's a structured series of books for piano by Bradley Sowash that will probably be helpful for you. They're really fun to work with and will help you work with patterns and little riffs.

You could make some transcriptions of some solos that you find intriguing.

You could experiment with some blues improvisation.

You could cross-pollinate by improvising with the left hand.

Take a little figure (short riff) and play it going around the circle of fifths. The next step is then to play it (in the appropriate key) for each chord in your tune. How do you choose the little riffs? By listening to recordings and bringing your favorite riffs into your riff repertoire.

When you improvise, you call upon a personal vocabulary of phrases.

The way you build that vocabulary is not necessary via improvising though.

You can work on developing some new phrasal pattern deliberately, in a slower tempo. Then rehearse it up to tempo, and then try mixing it between your existing improvisational phrases that you can play in "auto pilot" mode. By doing that you find ways to nicely transition into the new phrase from existing phrases and the best situations for using it.

In improvisation, you might start and end a solo using material you know very well. In the middle somewhere, you transition into some of this new stuff. If it looks like it's not working out, find a way to exit to familiar territory.

When you're working on developing new phrases, you're not doing it all in real time, so you have time to think. If you're tired of scalar patterns, you can consciously break out of it. "Write" a pattern that includes some non-diatonic leaps in it, and rehearse it.

1
using scales as a tool to identify lick
2
How to identify notes in a key that sound better while improvising?

6
How to keep practicing to compose music when you're too picky to listen to yourself playing
13
Breaking out of pentatonic scales for guitar riffs
5
Tips for starting with improvisation on guitar, with a focus on metal?
10
When to use different scales or modes over chord progressions?
5
Soloing on Scales
4
So... 84 modal scales vs actual practice and usage
0
Arm pain and endurance when playing Revolution by Chopin on piano
7
Is it bad practice to look at hands when practicing piano? How to break the habit?
0
Common scale tones when transiioning to a new chord
8
Playing Am pentatonic scale over A blues chord progression