With no accent mark available to soften a note or 2, can Dynamics notes be used instead? [duplicate]

I realize a form of this question has been addressed in the past, but ... I am very new to music theory and need a clarification. I was shocked to discover today that in music notation, there is no Articulation mark to tell the player to play one or a few notes more softly than the rest of the score ... nothing to serve as a opposite to the > sign. Soft isolated notes are played in music all the time, and I cannot believe there is no such mark invented by the folks who invented music notation. However, I have read posts about it on this and other forums, and encountered one knowledgeable person stating that if I want someone to play even one note softer than usual, I can simply use a dynamics mark above it, then use another dynamics mark on the next note(s). His suggestion would look like this (in measure 35, corrected in measure 37): 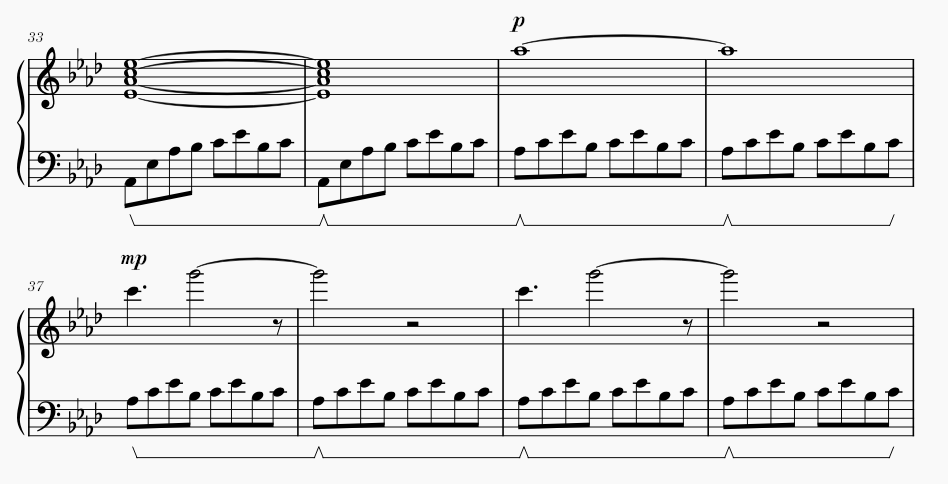 Is this acceptable? If not, what can possibly be used to tell the player to soften the note in measure 35?

While it's common knowledge[citation needed] that until classic-age there were rare cases of dynamics differences between parts, that doesn't mean that they were not considered: they were just more simple and generic, usually based on the selection of the [orchestra] instrumentation for the specific section of the composition.

In fact, those differences are actually less uncommon (and less modern) than we might think of: consider that clavichords and organs had many keyboards and registrations in order to provide different dynamics also. While the preference of registration/keyboard was up to the player, the difference was still important, not only for the timbre.

Since [post] romantic music onwards, also due to the technical and composition evolution of what had become the most common keyboard instrument, differences in dynamics of voices became much more common.

Consider this excerpt from Debussy's Golliwogg's Cake-walk (circa 1908): 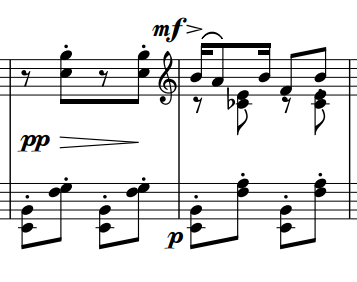 So, no, there's nothing wrong in specifying dynamics for a specific system (or voice), as long as it's clear what it's referred to.

In your case I would avoid putting those indications too above, otherwise they might be a bit confusing about their reference: try to put them as close (but not too much) as possible to their part.
For instance, the mp of the second system should better be a bit below and on the left than it is now; while it's probably clear that it is referred to bar 37, notation should always be as clear as possible, without allowing any possibility of doubt: the player shouldn't lose even a fraction of a second thinking about "is it above or below?".

2
Are anti-accents used for the piano?

9
What conventions are used with accidentals and tied notes?
23
Why crescendo or decrescendo over one long note in piano music?
17
Small Notes in Sheet Music -- NOT grace notes -- written AFTER the main note and beamed with it
2
Proper use of fermata marks on sheet music
4
The proper way to mark sustain pedal for MuseScore playback and live performer?
0
Can a pedal point note be used from any note?
4
How can i add 5 grace notes before a note, when only one grace note can fit in? (GuitarPRO)