Are pop/rock songs ever written using the melodic minor scale?

I am learning a pop song that was famous about a decade ago and starts on an F chord for a few bars before going to the following descending chord progression.

The song is notated with one flat but up until that point actually appears to use the notes from the F Mixolydianb6 scale which is the 5th mode of the Bb melodic minor scale. I found this song as I was looking for examples of songs using the mixolydian mode and on the wikipedia page this song was listed as an example. After looking at all the notes used in the vocal melody however, in the 1st verse, there is no M6 but only a m6 when the Bbm chord is used. Is it correct to say that this part of the song is actually using the Mixolydian mode or is it true that the b6 means it is actually using the melodic minor scale in this part of the song?

Here is a part of the score. The song is called Unwritten by Natasha Bedingfield 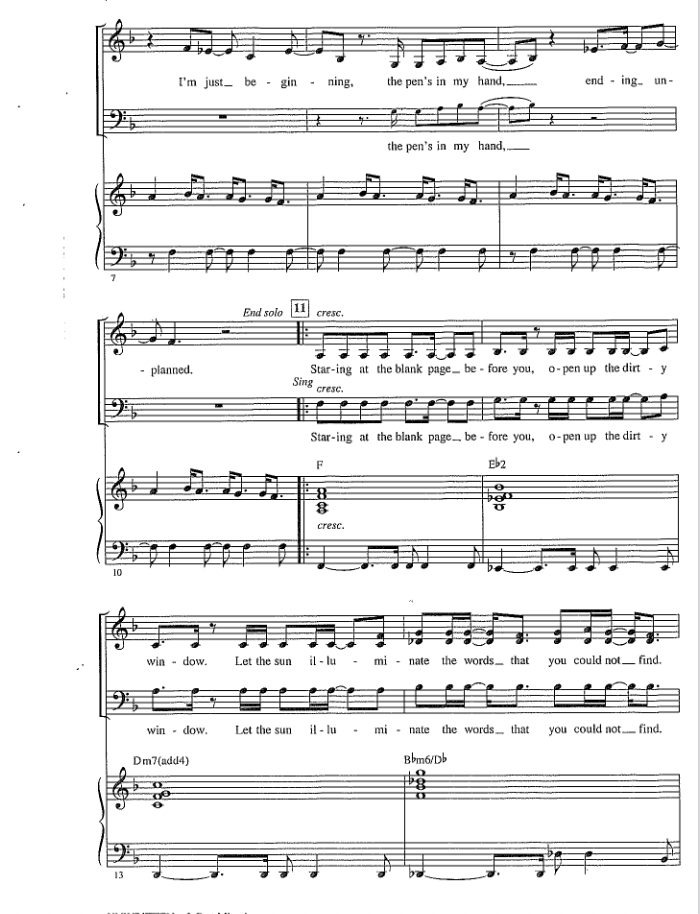 There are a few different ideas to be teased out here:

The question is presented in a way that suggests the idea that the song might be written entirely according to the melodic minor scale; that is, as though it were in the "key" of melodic minor.

Melodic minor is a scale, reflective of a technique many composers have used to construct melodies in minor keys. But it is not a key in itself, though certainly a composer could choose to use the melodic minor scale exclusively in a minor key song.

For anyone wanting clarification, the issue is much discussed on this site. A good starting point is Difference between keys and scales?

Are any pop/rock songs every written using the melodic minor scale?

Probably, but the example at hand is not one of them.

Listening to the song, I hear it unambiguously in F major. The case for F mixolydian is the frequent, prominent use of E♭ in the melody. However, a truly mixolydian song would emphasize the "mixolydian-ness" of both the melody and harmony. In particular, it would avoid V-I cadences or any other use of the leading tone. This song sticks to a pretty standard major/minor harmonic system, with the E♭s serving as "blue notes" rather than mode-defining pitches.

Blue note: a minor interval where a major would be expected, used especially in jazz. (From Oxford Dictionaries via Google search)

The chord progression that ends on Bbm/Db is just borrowing the latter chord from F minor to facilitate a chromatic bass line and to create harmonic tension. Given that the E♭ chord is also borrowed from minor, one could make a case for some limited use of the melodic minor scale as underpinning the bass line and harmony, but only in a very local, technical sense. The piece as a whole is major, and even that passage maintains an overall major sound.

Most minor pop songs are melodic minor. All others are in a minor mode (aelolian or dorian, a few may be in phrygian.) Songs in harmonic minor are very seldom. The only one that comes in mind is Hava nagila or our famous Bernese Chanson dr Sidi Abdel Assar vo El Hama by Mani Matter.

There's a huge misconception that scales are used to write songs. WRONG!

Any scale is just a set of notes which work well together, and have been set out in acsending and descending order.

I doubt that any songwriter thinks 'I'll use these scale notes for this song' before writing said song. Sometimes they may write the whole melody, then consider what key it's actually in.

Let's look at what's bothering you. Find a song in, say, A minor. Check all of its notes. If there's only G♯s (no G♮s), then can we say it's used A harmonic minor notes? If there's not an F or F♯ in sight, it could be A melodic minor, couldn't it? The defining bit is missing. And it's simply in A minor.

The notes which constitute the different minor scales (and modes) are man-made, and are used for exam purposes as much as anything. Minor pieces can and do call in reinforcements from other notes. The only real defining thing about a piece in a minor key is that the 3rds in it are m3. Even then you may still find M3 somewhere. That won't necessarily mean suddenly the piece has changed, and is now in a major key. Only that bit may be different.

Not the answer you're looking for? Browse other questions tagged scales or ask your own question.

20
Difference between keys and scales?