I just bought a Bugera 333XL-212 Titanium (combo, 120 Watts) which is awesome for small venues but is really too loud for practising at home. I can't set the master volume to more than 1 without taking the risk of disturbing my neighbours.

A solution would be to buy another amp, less powerfull, but before falling out with my bank and losing more space, I'd like to know if there is any way to reduce the power of the amp or the output volume, which would allow me to practise with a decent distortion, at a decent volume.

You have to use a power attenuator such as the THD Hot plate.

This reduces your amp's volume without affecting (too much) its tone.

Before spending $350 a THD hotplate per Lucas answer, which is basically just a high-powered volume control (variable resistor) between the amp and speaker, I would do the following:

This would cost about $10, maximum.

If the electronics store does not have sufficiently powerful resistors, you can make one up by adding resistors in series. Provided you connect in series you cannot damage your amp. But NEVER connect anything in parallel (don't ever connect an additional speaker across the terminals of your amp, you will blow the amp.)

Here's a typical circuit. Assuming a 100W, 4 ohm speaker, the theoretical performance is as follows:

Basic series circuit (will not harm the amp) 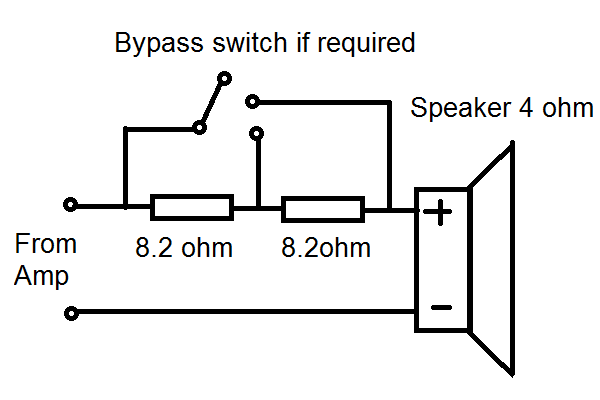 There are other chatboards on the internet that discuss this solution, but nobody talking seems to have actually tried it. They theorise that damping factor (the ability of the amp to damp speaker resonances) may be an issue. But they say that tube amps already have lower damping factor than transistor amps because there is a transformer between the speaker and the electronics. So they expect less difference in tone when applying this modification to a tube amp than to a transistor amp.

I've now tried connecting a 10 ohm resistor in series with the 4 ohm speaker of my (transistor) combo and perceived no difference in tone. There was, however, very little difference in volume. I expect that the nominal 4 ohms of the speaker is in fact a worst-case value, and the true impedance of the speaker in the useful frequency range is higher. The difference is more noticeable with distorsion than clean, so the lack of difference is probably partly because I'm compensating by playing harder. Two 10 ohm resistors in series makes a noticeable difference, and three makes a significant difference.

As I said before, increasing the impedance by adding things in series with your speaker will reduce the load on your amp. With such a lot of load reduction you might expect to see some difference in tone (though all I have noticed is a slight reduction in punchiness that is probably due to the lower volume anyway.) Therefore another alternative is to place a bypass resistor across the terminals of the speaker (not the amp.) When you put anything in parallel with your speaker, it's vital to check that the overall impedance of the speaker/resistor network is at least as high as the speaker impedance the amp was designed for (with a good margin). If it is lower, you will overload the amp by making it supply too much current.

This is nearly three times the nominal impedance of the speaker, so it should not overload the amp.

Potential divider circuit (To avoid overloading your amp, always carefully check impedance when connecting anything in parallel with your speaker.) 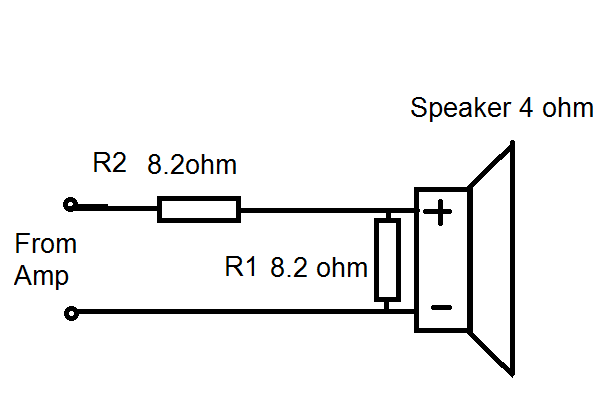 Not the answer you're looking for? Browse other questions tagged electric-guitar amplifiers or ask your own question.

3
Pushing a tube amp : better use the channel volume or master volume?

3
Tube screamer 808 with an ENGL Screamer 50W amp
3
Pushing a tube amp : better use the channel volume or master volume?
5
What is a power amp?
5
How to buy the "right" power attenuator for a tube amplifier?
2
Potential Tube Amp Issue
0
Tube Amp to Headphones
3
Big amp at min volume vs. little amp at high volume?
1
Volume of an amplifier - concern
4
How can I overdrive my tube amp at low volume?
10
What is the value of having tube amp in guitar power amp?