Harmonizing in fingerstyle with a bass line

I would like to learn some music theory relevant to harmonizing melodies for the fingerstyle guitar. The discussions of harmonization that I have seen focus foremost on the chord progression. This seems as an impractical approach for the fingerstyle guitar (especially at my level), where a typical score consists of a melody, a bass line, and an occasional middle voice.

The obvious approach would be to harmonize first with the chords and then pick the bass notes out of those available in the chords. However this leaves open the question of which notes to pick - e.g., are all the possible sequences equally good, given that they come from the appropriate chords? Should I merely rely on my ear, or are there more general principles governing writing a bass line? Is it possible to approach harmonization by adding one voice rather than via the chord progression? 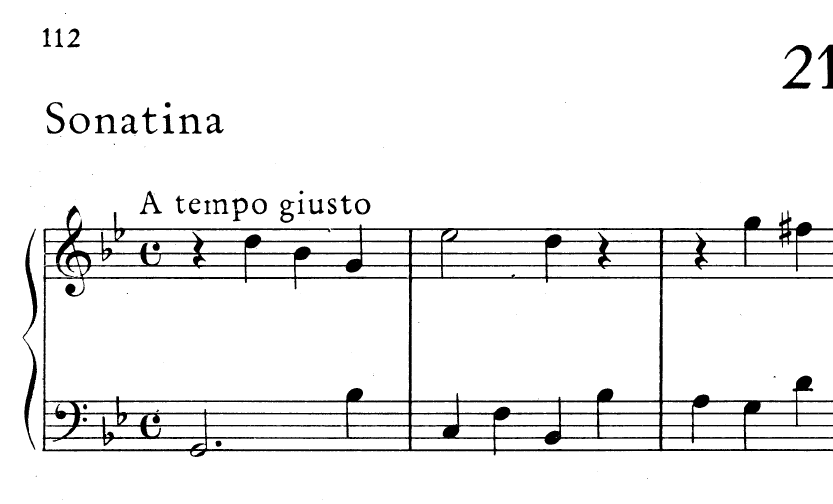 ...and because there are only two voices notated and no guitar chord symbols in the score you aren't sure what chords to play to ad-lib a fingerpicking accompaniment.

If the music you are dealing with is Baroque or early classical style (my example above is from Handel), I think you could try taking an approach like a harpsichordist would have used to ad-lib accompaniment to an unfigured bass.

Look up "rule of the octave" and "unfigured bass" for detail. The basic approach is to play root position chords for bass notes of the tonic or dominant and then play chords of the sixth, either first or second inversion chords, on all other bass tones.

It can be tricky deciding how to treat an actual bass, because movement of the bass can be arpeggiation where the bass moved over chord tones but the chord doesn't actually change, or the music may change key in which case you need to reassess which tones are the tonic and dominant. But, if we try to apply the basic approach of root position chords on tonic and dominant and inversions on the other bass tones to the example above, we get... 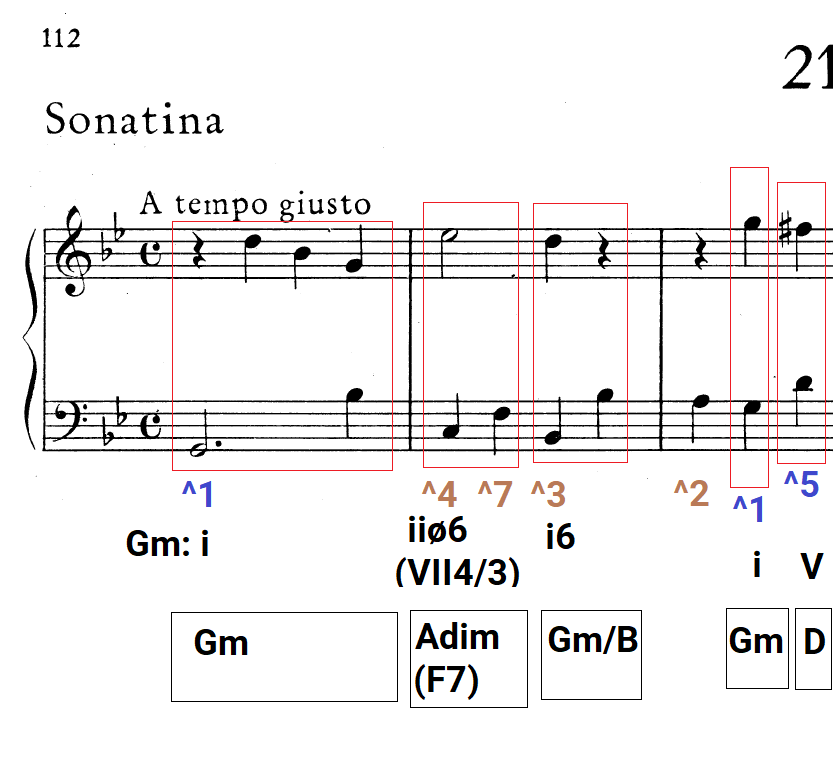 The ^ before numbers just means scale degree so ^1 is the first scale degree, the tonic. I put the ^1 tonic and ^5 dominant in blue to show where we will use root position chords. The other tones are brown and will take inverted chords.

I put red boxes around what I considered to be the actual chord changes. This is where the bass arpeggiation idea comes into play. Notices that in the first bar the bass does change, but it's just an octave. The bass moved but the chord didn't change. Both tones are ^1 the tonic and so get a root position chord.

In bar 2 the bass continues with ^4 and ^7. This is a really good example of bass arpeggiation. Instead of treating it like two chords, it probably makes most sense to consider ^4 and ^7 as one F7 chord. It's tedious to explain in words, but if you harmonized just the ^4 as a first inversion chord, it would be an Adim/C, just hold that chord when the bass moves to the ^7 and the result is F7 in second inversion. The other way to handling that part is just quickly looking at all the tones C F Eb and seeing is an incomplete F A C Eb or F7 inverted. Again, much easier to just do with some practice than to put into words!

The bass continues to ^3 which being neither tonic nor dominant should take first inversion chord i6. Next the ^2 has a rest in the treble so you could simply play nothing, or if you wanted to play a chord it would be first inversion viio6/3 of F#dim. Final the bass tones ^1 and ^5 just take root position tonic and dominant chords Gm and D.

If it seems like that is a lot going on in a short span of time, or if the F#'s in F#dim and D are confusing because of the key signature, just understand that the rule of the octave which I mentioned earlier would be the basic training to play most of the stuff in an intuitive, automatic way. This Google Site has an nice overview of that material.

The bass line should imply the harmony; normally, strong beats will get the root or third and perhaps the fifth (or even the seventh in some cases) of the implied chord. Weak beats can have any note but usually are either tied to the bass of the previous beat or fill in with other notes to make a walking bass line. Normally the bass moves more slowly than the melody but one can walk a bass under a long melody note.

Basically, (bassically?) one is composing two-part counterpoint on-the-fly; it takes a bit of practice but isn't too hard. The only real practices are to avoid parallel octaves and fifths; these sound like one of the voices dropped out (and there aren't going to be any other instruments to cover.)

Check the Internet for "two-point counterpoint" or look at Percy Goetschius' books "Elementary Counterpoint" or for a much more modern point of view (but still close to the others) is Kent Kennan's book on counterpoint. (Goetschius has two other good books, "Exercises in Melody Writing" and "Counterpoint"; his other books use different terminology and explain some other concepts in what I think is an outmoded description.

My advice - additional to other answers - is to play hundreds of Baroque and classical pieces arranged for Guitar or Keyboard with thorough bass notation, there you‘ll have the chords and a musically written bass line. From this examples you will be able to derive your own theory for good voicing and counterpoint.

To your comment on Michaels answer: My goals are rather modest: I can pluck by ear a melody for a children's song or some Russian folk, and I would like to add the bass to make it more interesting. My child is the target audience.

There‘s a simple way to accompany children songs playing the root note of the chord on beat 1 and 3, and the 3rd or 5th on bear 2 and 4 when the harmony changes you play the passing tones between I-IV-I-V-I.

Such kind of bass line could be:

But these are not separate and independent - melody carries some bits of harmonic/chordal information and rhythm, a rhythm can be melodic (think We Will Rock You), and a chord voicing has a timbral aspect to it, etc.

The bass is an elemental part of your chordal harmony. Bass is a part of chords. Whatever your bass plays, it affects what chords you're playing. A straight-forward way of writing a bass part is to think about a chord progression and play chord tones as your bass notes. Here are three different difficulty levels:

For deciding on what the chords are, I recommend proceeding through the following difficulty levels:

So there are two aspects to the difficulty: (1) how complex chord progressions you use, and (2) how you select the bass notes from the chords. You CAN for example

So there. Think about what chords you play, and play the bass notes from the chords. Start with simple three-chord style and play only root notes. The chords don't have to be what's written in a song book, because melodies can be accompanied with chords in many different ways. The song writer or arranger or whoever wrote the song book, decided on some difficulty level, but it's almost never the only possible way to write chords for a melody.

That being said, there are other styles for harmonizing a melody. For example, mechanically add a sixth below the melody. This will bring out some kind of chords, completely synchronized to the melody, and depending on how "melodic" the melody is, it may be enough. BUT in this style, you won't be playing bass notes really, you'll be playing the stuff between bass and top-note melody, and the bass will be implied. Here is a toung-in-cheek example of how to mechanically harmonize Ode to Joy

Not the answer you're looking for? Browse other questions tagged guitar harmony classical-guitar bass-voice or ask your own question.

9
When to use inversions in harmonizing a bass line
10
Does a walking bass line usually consist of chord tones?

9
When to use inversions in harmonizing a bass line
13
How do you write successive, non-functional chord progressions?
6
Bass line melodies
4
Harmonizing with Voice a Third Away
3
step-wise vs. circle of fifths movement in bass line
3
Audiation: dealing with key changes when you hear in terms of solfege
6
In the partimento tradition, what strategies were used to harmonize non-bass melodies?
2
Arranging K 545 for a string quartet, how to write the harmony part
0
How can I improve bass lines with fingerstyle guitar playing?
1
Harmonizing a modulating melody with ornamentations