The Klavins 450i grand piano plays the same pitches as a conventional piano, but its bass strings are about twice as long (and presumably have different density and more tension, to compensate). The lowest note's string is about 12 feet long. 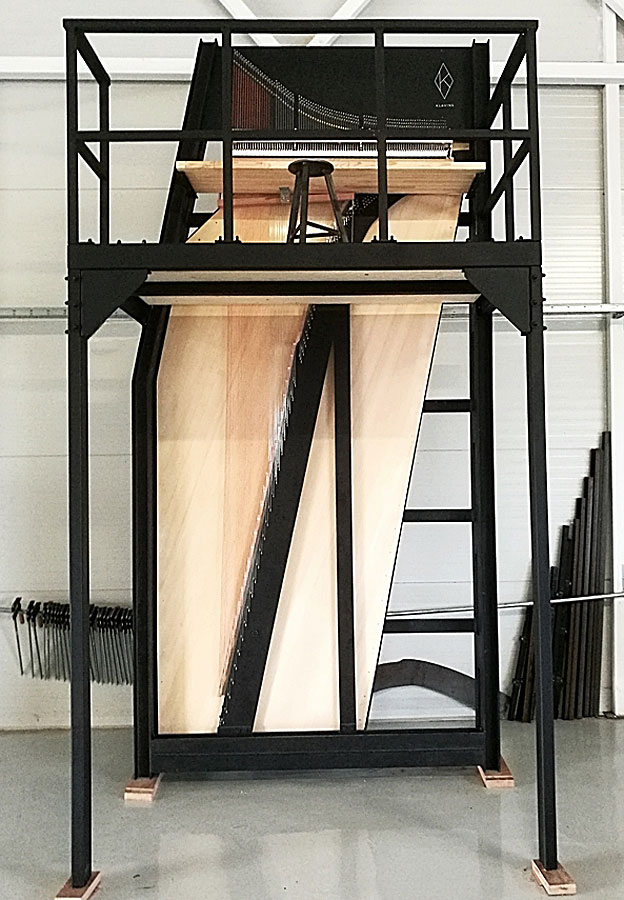 How does this affect the instrument's sound, compared to a conventional grand?

As a short-scale bass guitar has a "fatter" sound than one of normal size, the 450i's low notes would sound "thinner" than a Steinway D.

On the other hand, a Steinway D sounds "richer" and "fuller" than the smaller Steinways.

Haven't played or heard such a piano live, but I can make some “educated guesses”.

The most clear-cut difference is that longer strings have less inharmonicity. Thus they will sound clearer / cleaner, and reduce the need for stretch in the or even make it unnecessary entirely. The only flip side of this is that it will sound in a way “too perfect”, perhaps sterile.

All other effects will come not from the string length alone, but from a combination of it with other factors. Indeed that's also true for electric bass – the article claiming that short-scale basses sound inherently fatter is frankly a bit rubbish. Both short- and longscale basses have fundamentals plus harmonics in similar proportion. The differences are

Unlike with electric bass, on piano you don't get to apply EQ to the signal as you like. However, the instrument itself acts as an EQ too, and specifically the large size does make it easier for the body to bring out the low fundamentals. Also, more so than with bass, a piano can be designed to put much more energy in such long strings. So I'd expect the 450i to sound significantly more powerful in the bass register than a normal grand, certainly not “thin”. It may also have such an open overtone spectrum that it becomes overpowering – however unlike with turning down the bass in the mix, simply playing the low notes at a quieter dynamic level will also make them sound rounder, fuller, so that should never result in a “thin mix” either.

And because a piano isn't played through a nonlinear amp, the “multiple extra harmonics” aspect doesn't apply at all.

In Pianoteq, you can freely vary the lenght of the simulated strings. At least there, it affects pretty much only the inharmonicity amount. That may not be quite realistic, but you can give it a try and decide whether you feel that eliminating inharmonicity does in any way take away from the “piano quality”.

I'd suggest a simple experiment.

Listen to an action movie teaser (like this) in a well built and designed movie theater, then with your home computer, your laptop speakers, your tablet and your smartphone.

The sounds are "the same". But the result is quite different.

While it's true that "size doesn't [always] matter", it normally does in physics - and, thus, in acoustics. They are simple physical objects that can move air in simple ways: making air vibrate just as they're "told".

Strings that long will certainly sound different due to the amount of air they are able to move, which means that they will be able to pass along a much greater amount of harmonics, which is (mostly) what our ears - and brains - perceive.

BUT.
Keep in mind that "big instrument" doesn't always mean "big sound": a single piccolo flute is clearly more easy to be listened and recognized than a doublebass, at least to our ears, brains and... tolerance ;-).

Sound relevance is a matter of physics and perception. Loud sounds can be perceived as soft and vice-versa, depending on the sound and also physio/psychological context (that's why it's called "psychoacoustic").

Not the answer you're looking for? Browse other questions tagged piano acoustics or ask your own question.

3
how to play a double mordent on the piano
4
How to synthesize grand piano sound
13
Piano vs Guitar Strings? Tension vs length?
7
relation of piano string length to pitch?
5
How to play a note with different length with both hands?
2
Does a Dirty Piano on the Inside Affect Action and Sound?
1
Different Piano Octaves
1
Could knocking on solid objects create different pitches and notes? If so, how?
27
What modern innovations have been/are being made for the piano?