How can a snare's activation be made quieter?

I play the snare drum in an ensemble that plays a lot of classical music, and in order to avoid having the snare rattle during percussion rests, I make a habit of turning off the snare during long rests. However, when playing on the snare I most frequently have access to, the act of turning the snare back on creates a noise that's loud enough to be heard in recordings of the ensemble.

At times, though, I've had the opportunity to play on a different snare that's virtually silent when the snare is turned on, and I'm interested in trying to recreate this effect on other snare drums. What aspects of drum hardware and/or tuning are relevant to allowing a snare drum's snares to be activated as quietly as possible?

This question is related, but instead deals with the task of minimizing the snare rattle itself, rather than the sound of snare activation.

To directly answer your question, you need to control the snare's lever arm so that once you get past the point of most resistance, you're not pushing it too fast. In other words, push on both sides of the throw-off lever while you're re-engaging the snares, and it helps to anchor your hand(s) on the drum itself for finer control. It also helps to have a good throw-off, since cheap ones tend to seize up. This style of throw-off has never given me trouble (unlike the more common vertical lever ones). 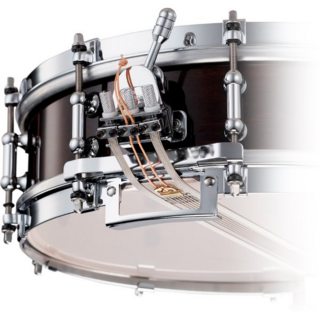 Here's another indirect solution: I always preferred to rest my hand flat on the drumhead during rests instead of using the throw-off, if I didn't have to switch to a different instrument. It controls most of the sympathetic resonance, and I could avoid the sound of re-engaging the snares and the embarrassment of sometimes forgetting to re-engage them.

Not the answer you're looking for? Browse other questions tagged tuning equipment snare-drum or ask your own question.

12
How to prevent snare rattle?

12
How to prevent snare rattle?
4
What equipment can be used to measure sound equipment quality?
9
How do I get a short snare sound?
0
Can I plug my guitar straight into Behringer MIC2200?
3
How do I make the snare drum identical every single hit? (Garageband)
14
How can some USB 2.0 audio interfaces support phantom power through USB alone?
3
How far can 9's be tuned down?
4
How do the parts of an '80's Pearl Export snare strainer come together?