Are there pieces that require retuning an instrument mid-performance?

Are there any musical pieces that call for the musician to detune/retune the instrument, not in advance like a scordatura, but mid-performance?

I think it would be a neat avant-garde concept—for example, temporarily adjusting the peg of a violin's G string to play F#3 then adjusting it back, etc. I'd imagine it would be challenging but not impossible, and I'm curious to know if such pieces exist.

In relation to the violin (or other string instrument) the specific technique described — using the tuning peg to detune and retune a pitch — is called peg scordatura (also peg glissando and glissando scordatura).

A very clear example of this occurs in Alfred Schnittke's Stille Nacht (1978) for violin and piano. At the end of the piece, the violin detunes and retunes the open G string down to D and back to G again, creating an eerie glissando. Note also the very end of the piece, in which the tuning peg is used to create a vibrato/trill effect. The below recording is timed to the peg scordatura.

In the comments below, it's pointed out that for technical reasons, peg scordatura will only be found on the final note of a piece.

Here are some counterexamples:

Stavros Choplaros's "Sonata da Chiesa" (2015) uses peg scordatura throughout. The below images are just two examples from the score, which is included in his doctoral dissertation from King's College (PDF pages 139–150).

In Karl Gerber's "Three Formulae on One String", a computer-controlled violin employs peg scordatura. In the below Vimeo recording, the technique is first used beginning at 1:14.

Gerber, "Three Formulae on One String"

In "The Rite of Spring" Stravinsky requires the celli to detune their A-strings to G-sharp for the final chord of the piece (and asks them to play a four-note chord "non arpeggiato"!): 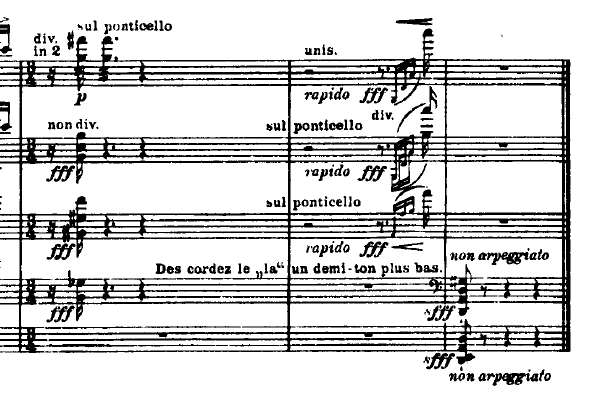 Similarly at the end of Jörg Widmann's Viola Concerto the soloist has to detune the C-string over several measures:

The existing answers are all good - to add something else to the mix though:

For a particularly extreme example, Michael Manring the experimental bass guitarist enjoyed the expressive possibilities of retuning mid performance so much that he had an instrument purpose built to allow him to retune quickly on the fly.

This eventually has extended to whole pieces built around dynamic retuning while using natural harmonics, as heard here:

Arguably at this point that barely even counts as "retuning", it's just become another expressive capacity of the instrument. Still, I thought it would be relevant to the discussion for an example of pushing this idea of dynamic retuning to the limit.

Some banjos are fitted with cam tuners (known as D tuners, Scruggs tuners or Keith tuners) which facilitate fast, accurate retuning between two fixed notes, and which are also used to good effect during playing.

Here's an except from https://en.wikipedia.org/wiki/Beacon_Banjo_Company explaining the history of their invention.

A couple of examples of other songs where players use this technique.

Perhaps a banjo player can weigh in on this. I'm no expert (I'm a guitarist) but I note that the sound is similar to slide guitar, and both instruments are fretted, picked and played in American (country, bluegrass) folk music.

Unless I am mistaken, no one has mentioned the Schumann Piano Quartet where the cellist is asked to tune the C string down to a Bb at the end of the slow movement, in order to hold a long pedal point.

There's a song in the musical Batboy that does this. I'm forgetting a lot of the details (esp. the name of the song), but I think it was done to shift the range of the vocal melody and/or as a phrase modulation for musical interest. It just coincidentally inconvenienced the guitar player. Most of the song could be played in standard tuning except for the middle section that needed a low Eb from the guitar.

Somewhere there's Haydn symphony where the violins are asked to retune the G string to (I think) F and then play the open string while tuning it back up to G. But I can't remember which one and I don't have the scores or time to search IMSLP.

Walton in 'Facade' asks the cello to retune the C string to B, and then notates it as a transposing instrument. I once heard a performance where the player didn't realise that and played all the C string notes a semitone sharp - not a success. That's not exactly during a piece as it's for one of the movements only so it's more like scordatura.

Not exactly "retuning," but lots of orchestral music has the clarinets swap between the Bb and A axe.

If one is playing all the Bach unaccompanied cello suites, one must detune for the 5th suite (A-string tuned down to G). That doesn't really count as "mid-piece."

Now, do you count using a capo on the guitar family? Or changing settings on an autoharp?

I'm surprised no one has mentioned Nigel Tufnel's performance where he retuned the violin he was using to play his guitar with.

It's quite clear from the video that the solo really wouldn't have been the same without the retune.

I'm not aware of classical music pieces that require some occasional retuning, but if they exist I suspect they are written specifically for a particular virtuoso performer who can pull it off reliably every time.

On the other hand, some virtuoso performers do exist, who among other things take advantage of the possibilities offered by the instrument's tuning machines. One example is this:

A similarly gifted guitarist, Luca Stricagnoli, occasionally does something like that, but I couldn't promptly find an example.

And while this isn't strictly an answer to your question, but to give an idea of what some people can do, I once saw Vishwa Mohan Bhatt change a broken string in the middle of a long improvisation and then tune it up as needed, and throughout this process not a single bad note was heard... in fact, if I had not been watching him, just by listening I could have thought that the improvisation just changed to a slow mood for a minute before going back to normal.

Bottom line, retuning while playing can be a thing, but only for the top of the top of players.

Not the answer you're looking for? Browse other questions tagged technique tuning or ask your own question.

4
How should tuning systems / temperaments be notated in modern scores?

10
What sweeping (for bass guitar) techniques are out there?
1
Fingerstyle finger economy - how to play phrases that require index finger on high strings?
5
When tuning piano, is it important to tune the notes that are not played?
3
Would an instrument that tuned itself harmonically on the fly sound in tune?
2
I am struggling with fingerboard muscle memory on the violin. Are there exercises, besides scales, that can help me?
5
What are brass instrument "false notes" and how are they played?
8
Brass instrumentalists are taught that higher notes require faster air while lower notes require more air. How exactly is this different?
5
What are the base notes that different tuning system used?
5
Is there anything about a strat that lends itself to Eb standard tuning?