What do you call a suspension that never resolves?

In "A Day in the Life" by the Beatles, I notice the melody plays a note (E) just before the second chord which looks like a suspension except it never gets resolved as there is no E in Bm. Is there a name for this kind of suspension in classical music? I read about all the different kind of non-chord tones (neighbour, passing tone etc etc) and couldn't find one that suits this description. 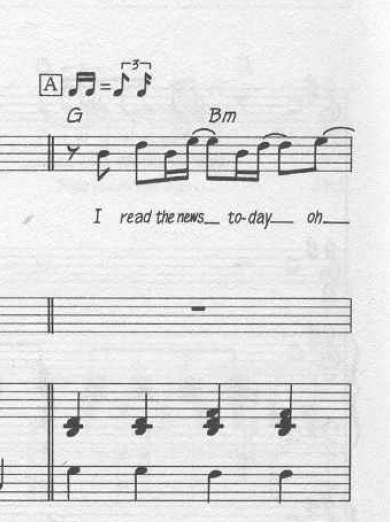 This is a syncopation and anticipation, so the E note "belongs" to the Bm chord. Don't consider it as part of G (even though it would work as 6 of G). Melody anticipates the harmony.

In this case it's just a slight rhythmic anticipation, but consider this section of Charlie Parker's "Billie's Bounce":

The last E in the first measure does not belong to F7, it rather introduces A-7 in the following measure. Jazz improvisers often take it even further, and when a modulation is incoming they play a whole pick-up phrase in new key in advance.

there is no E in Bm.

Yes, but it is not a terribly bad sound either. This is not classical music. While 11 is typically an "avoid note" in major chords, it often works well with minor chords.

What do you call a "suspension" that wasn't a chord tone in the initial chord?

In other words, I think you shouldn't identify this as a suspension, because it doesn't suspend a chord tone in the first place.

the line moves from a D which is a chord tone in G major to neighbor tone E, then when the chord changes to Bm the E is still a non-chord tone which moves back to the D which is again a chord tone, but in Bm rather than G. 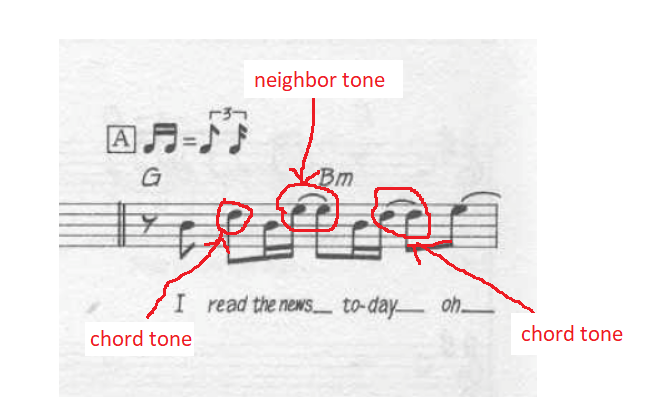 FWIW, in the spirit of @Tim's answer, and shying away from applying common practice theory to rock music, you might want to check out Temperley, Melodic/Harmonic Divorce in Rock. It talks about traditional non-chord tone identification along with a unique treatment, the "divorce", of "dissonant" melodic tones from chords in rock music.

I played this short phrase at the piano and included the following Em chord. I think it's pretty reasonable to look at this as just G6 and Em (sort of Em7) and the F# in the bass is the actual non-chord tone as a passing tone. Especially in this rock/pop style I think it's hard to regard an add6 like a classical dissonance, a dissonant tone that must resolve.

To some degree it's just six of one, half dozen of the other. The important thing is the phrase is all tonic elaboration.

It does resolve on D, the intervening B does not affect the resolution. However as Michael Curtis pointed out, the E is not a chord tone so not really a suspension. It is an appoggiatura and is very common in most music idioms. Another Beatles' song Yesterday makes much use of appoggiaturas.

However in pop, rock, folk music etc. the pentatonic scale has such a powerful linear effect that it may not be necessarily be exactly related to the underlying chords. The listener often hears music as linear rather than vertical so a non-chord tone would not necessarily be heard to clash with the harmony. Sometimes jazz improvisers play arpeggios that are different from the underlying chords.

This was written in the mid-1960s and suspended 4th chords were becoming more common and they didn't resolve.

As many have mentioned, this one DOES resolve.

But yes, in today's music the sus4 chord is sometimes used as an entity in itself. It's called an 'Unresolved Suspension'.

There was a similar, earlier relaxation of rules when the concept of an 'Unprepared Suspension' became allowed.

I agree with the deleted answer of pied piper: the note E is resolving to D. The chord note B is irrelevant. We can hear this as changing tone or like a suspension.

There are many songs that contain this motif like when man loves a woman (Percy Sledge) or Hello (Lionel Richie). It has a touch of pentatonic, like in many spirituals.

But like others say: why has a suspension to resolve? Why discuss popsongs like a classic piece? You could go on and ask: should this suspension not be prepared?

More blatant unresolved suspensions, that play more a role of suspended-something, appear in James Taylor's music. In some examples, everything is a sus chord! :)

There is no problem, no suspension. One can use any notes one wishes over any chord, and one often does. Suspensions often do resolve, but they don't have to. In Classical days, they would frequently, but one can't treat pop music in the same way.

It's not really a suspension since the E is a non-chordal tone in the first chord, but it's similar to a suspension, and it does resolve, to the D. The fact that there is a B between is irrelevant. Remember this is a pop song, not classical harmony.
Pop music generally doesn't need to resolve suspensions, so there's no special name for one that's unresolved.

16
Should the dominant-seventh chord in just intonation use 9:5 for its seventh, or rather 16:9?
13
How do you write successive, non-functional chord progressions?
5
Tonal harmony: 18th century counterpoint vs. Accessible contemporary harmony and composition
0
4 consecutive non-chord tones
8
What do we call a chord progression that doesn't have a tonic chord?
3
Are these upper voices in this final passage from Handel a bona fide F7 chord or some kind of non-chord tones?
6
Block chord style and appoggiaturas
3
How do you explain this Db7 (functional harmony) in "There will never be another you"?
0
Roman numeral analysis of chord with non-chord tone in bass
9
What do you call a very brief change of key