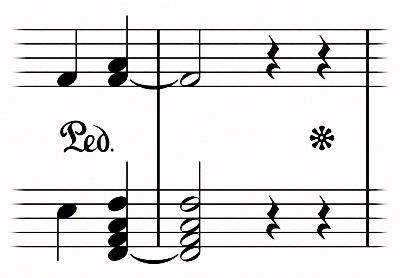 I play piano. I took Trinity College London grade 6 practical and finished my theory course. I still don't understand why the Pedal sign looks like the word “Leo”. Could someone tell me what this is supposed to mean?

Once you know it, I guess you can't unsee it.

The font "French Script" has a similar small letter D:

The font "Monotype C" has a similar capital letter P with the uncommon "leg":

It's even more pronounced in "Vivaldi":

But, usually, Ped. is modelled as a single glyph like in Bravura:

David Rowland, the author of "A History of Pianoforte Pedaling" (Cambridge University Press, 1993), suggests the script "Ped" mark may have emerged in the late 1830s with the publisher Breitkopf & Co. This is based on early Chopin editions found at the Chopin Variorum. He further proposes that Breitkopf might have received new engraving punches around that time, with other publishers following suit.1

The first of Breitkopf's Chopin publications to use the script "Ped." (also the first to use the "snowflake" for pedal release) is the Ballade in F Minor, Op. 52, published in 1843. (The French first edition of the same piece, published by Schlesinger, contains a block "Ped.") 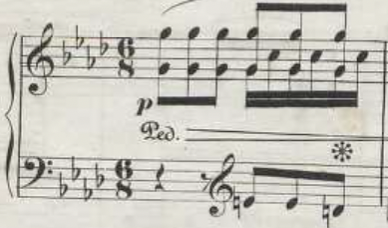 Also in 1843, Schlesinger published Chopin's Impromptu in Gb Major, Op. 51. It contains a block "Ped.", though it does include a snowflakey pedal release indicator. 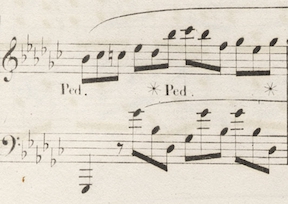 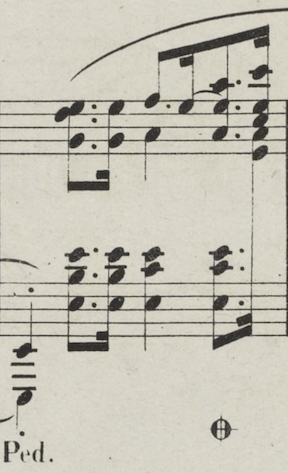 1 Email with Prof. Rowland. Reproduced here by his permission.

Could someone tell me what this is supposed to mean?

As you already know, it means Ped.

14
What does this 'Led' or 'Σed' indication mean?
7
Pedal Notation with a cross or plus sign — is it supposed to be an asterisk?
5
How to notate lack of pedal for a measure?
2
Alkan Prelude in A-flat minor Op 31 No 8 - how properly use sostenuto pedal in this piece?

1
Essential things to memorize in music theory
4
Staying on track when learning theory vs learning to play
2
After one semester piano course, continuing piano as a self-learner, but the music is unmotivating me. Any advice?
9
Why is the hexatonic scale that can be derived via a chain of perfect fifths so little-known?
10
Most complex "block" of sheet music notation
2
Trying to Understand C# major/minor Over A major Bassline
5
Am I going to be handicapped for attempting to study theory with a monophonic instrument?
8
Does the natural sign still apply with the octave up sign?
2
How do I play this section from wedding march?