I have an assignment with a simple rhythm in 4/4 time. I am being asked to rewrite the rhythm as syncopated with one half beat before the start of the measure. I cant add a photo as it is too large to upload even with compression but the notes are as follows:

How would I syncopate this? I have tried reading around the concept but cant seem to grasp it. From what I can understand it is shifting the expected accent. In this case to the 2nd and 4th note

Any help would be appreciated

Just so as to not COMPLETELY do your homework for you...

I've started with a slightly different original version. This is what I think they're asking you to do to it. 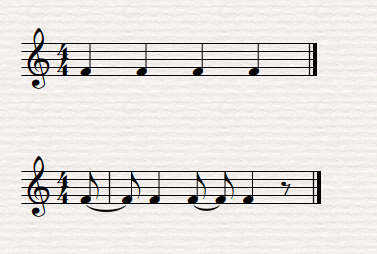 Syncopation is moving the emphasis of notes played. Normally, the first beat in a bar is more emphasised - slightly louder - than the rest, the third (in 4/4) being the next most emphasised. As in 1 - 2 - 3 - 4 - 1 - 2 - 3 - 4. By listening to how certain parts are emphasised, we can determine what time signature a piece has.

By putting that emphasis just before the new bar, and not actually having any emphasis at the beginning of the next, it throws things. Sometimes called a push note, as it pushes that emphasis early.

As Laurence says, the 3rd beat can also be 'pushed', although the wording of the question doesn't necessarily expect that.

Not the answer you're looking for? Browse other questions tagged theory beginner syncopation or ask your own question.