Is the I - IV - vi - IV music progression common in pop music?

So I just started studying music theory, so for fun I thought I would practice by analyzing a song I remember enjoying. Marianas Trench's satirical song "Pop 101":

Is it possible they made a mistake and ran with it? Or are there a ton of songs in I - IV - vi - IV that I'm just failing to find?

This parody is very clever for sure. There are plenty of V chords in it though. I also can’t think of one tune offhand that uses that specific 1-4-6-4 combination. Replace either 4 with a 5 and you might have something there. Maybe they used the last “4” to get a false rhyme at 0:40 with “familiar” (familior?). A very large number of pop tunes use various combinations of I,IV,V,vi, which you pointed out. It seems to be the winning combination these days.

Hook theory has a nice database, which you can search by chord progression. It displays the corresponding songs, and the probabilities for the following chords. 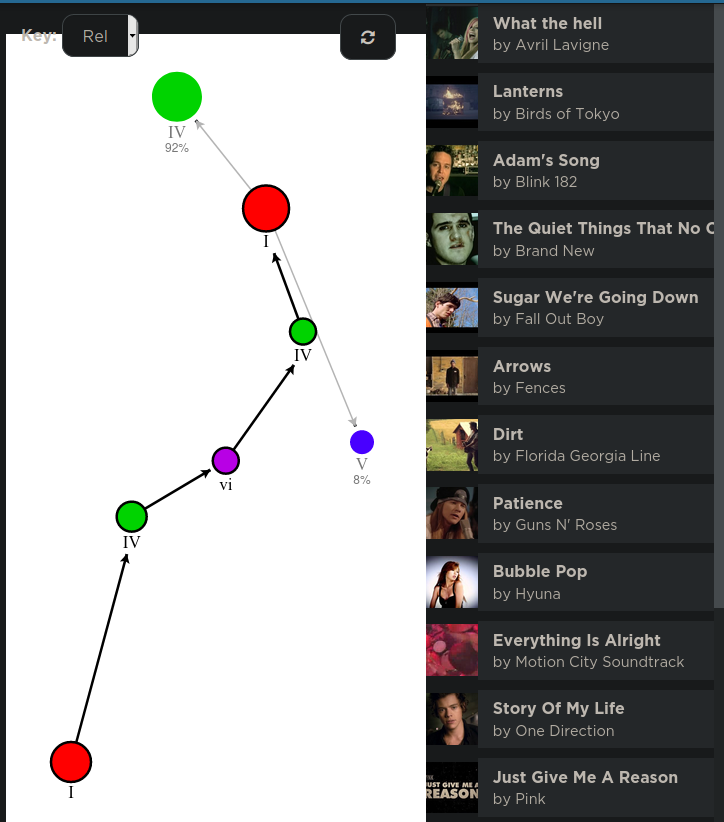 If you look for I, V, vi, IV instead, you get a lot of corresponding songs. Some of them were used in "Axis of Awesome - Four Chords".

Not the answer you're looking for? Browse other questions tagged chord-progressions pop-music or ask your own question.

12
How common is the complete circle of fifths progression?
3
What are common compositional elements of 80s synth pop?
2
What are the methods used while writing pop music that make it so recognizably pop
2
Is there a common name for this common chord progression
1
Chords with different bass and non-diatonic chords inside a progression
0
Non-repeating chord progression in pop verse progression
3
chorus construction in pop and rock
2
How to use a diminished triad in 1st inversion in a pop-music chord progression