Floyd rose bridge leaning to the treble side

I've decided to change my strings on my guitar, and when I finally was done with setting up the springs to make the bridge parallel to the body, I wanted to make the action lower. I noticed that it was finally low enough but there was some buzzing on treble side, but I couldn't get it high again.

There wasn't that much buzzing for G and B strings, but on the high E string starting from the 12th fret I couldn't make a clear sound, some frets sounded the same, it was really weird... I turned the screw that's supposed to control the action almost all the way up, but the strings won't budge, the E string's action was very low. Then when I checked my bridge from a certain angle I noticed that it was leaning a lot to the treble side, and thought that it may explain all of this.

And just in case, I don't think it may come from the springs, as the bridge is parallel to the body.

Here are some photos to explain the situation : 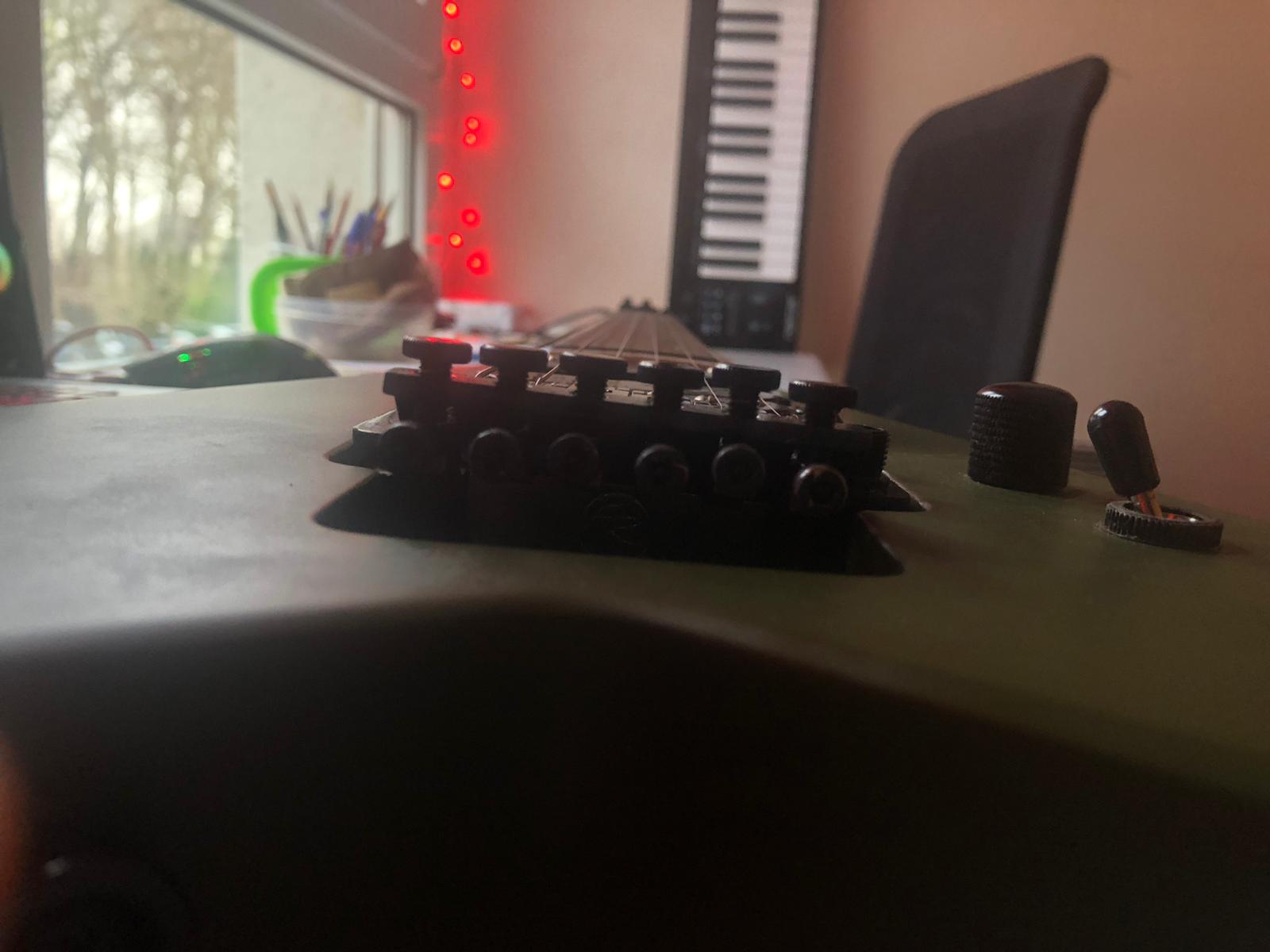 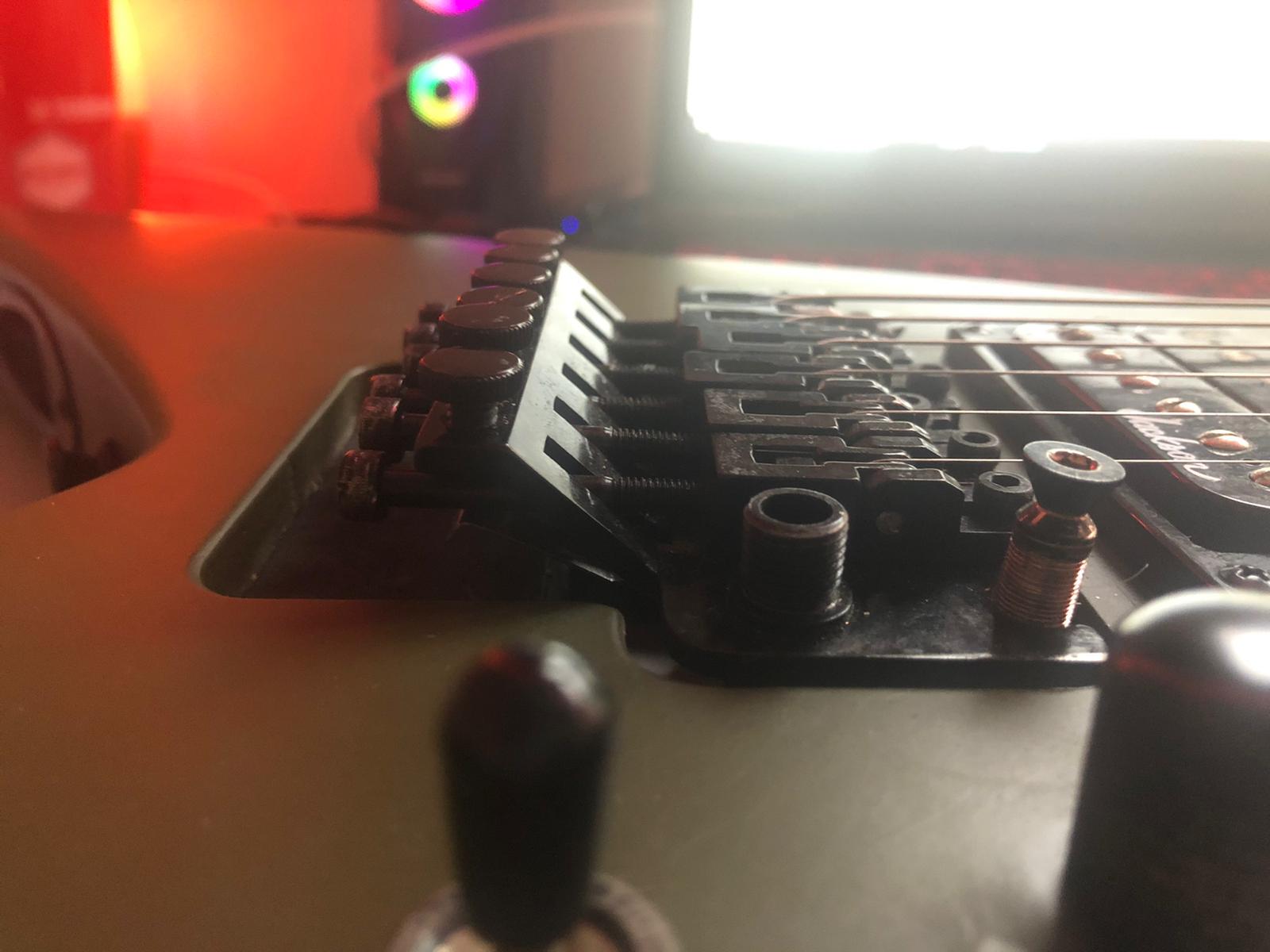 Your second photo makes it very evident what the problem is - the pivot point shout be on the neck of that screw, not against the thread, and it should be screwed properly in to the body of the guitar. I have highlighted the problem here: 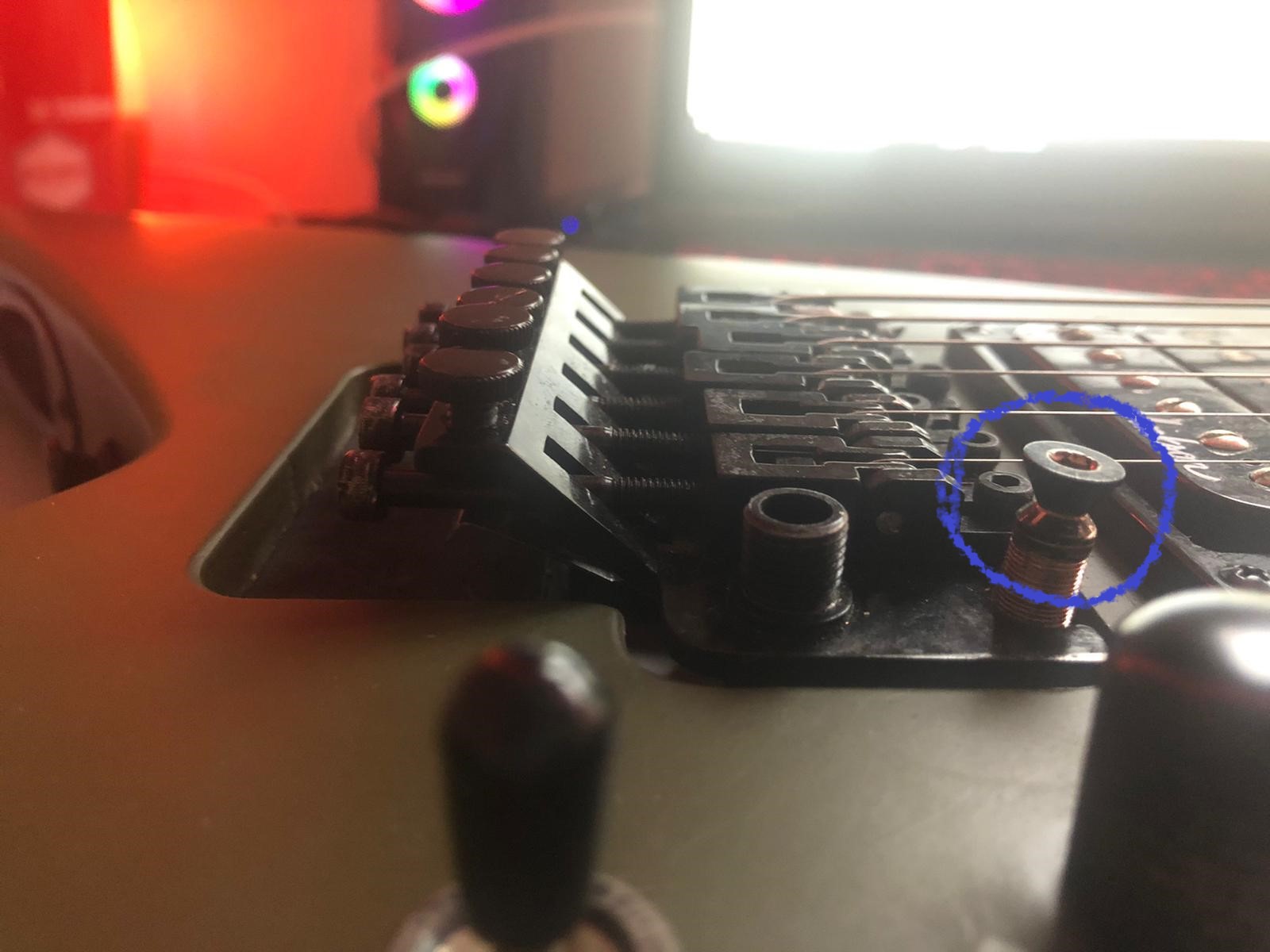 With the blade pivoting on the screw thread, turning it will just grind away the metal, and will not adjust the height. I'm not sure how you managed to get it like that, but to fix it, you need to:

I think you may have a fundamental problem with the neck tilt, as the truss rod has the most dramatic effect at the nut end of the neck, but I'm not personally sure what the correct correction might be.

I've done little work with Floyd Roses, being a hardtail guy at heart, but if my memory serves me right, there are under-saddle shims that handle individual string height, and the stud which provides the "knife edge" the Floyd Rose system is known for is the adjustment you did to get the bridge off-center. If I read correctly, you've tried to raise the stud again, to no effect.

Having the bridge level with the body is an aesthetically nice thing, but if it's playable without it, then it kinda doesn't matter. The high frets are not playable, as you say, and if you're not using the high frets, why are you playing a guitar with a Floyd Rose, right?

I would normally suggest that you take it to a trusted tech, who would be able diagnose the problems with the instrument on the bench a lot easier than someone looking at pictures and reading descriptions on Stack Exchange. This isn't normal times, so interacting with your local guitar techs might get weird.

(My favorite tech is more or less in active retirement, and so you can bring in guitars for him to work on, but you won't be in the room with him, which isn't best. I want him to be healthy, so I don't mind.)

A solution I've seen a lot on guitar building and repair channels on YouTube is making the higher frets (like maybe 15th to the end) lower than "flat", so that, down where the truss rod doesn't help as much, the frets get out of each others' way a bit more, allowing for a lower action. I personally have never bought a set of fret files, so I'm not advising that you do it, but it is a solution I've seen.

Failing access to your local guitar tech, it is always good to understand your own guitar, and Sweetwater has a Floyd Rose setup guide that might help to get your guitar into fighting shape.

Whatever your next move is, best of luck.

Try searching YouTube for "adjust floyd rose tremolo" YouTube has a ton of electric guitar how-tos, and it can be daunting finding one to suit a specific situation. Here is one I've watched myself that explains how to change strings and make adjustments, but you should be able to find quite a few other fine how-tos on adjusting a Floyd Rose bridge.

by the same guy with general DIY tips that includes truss rod adjustment.

Not the answer you're looking for? Browse other questions tagged electric-guitar strings bridge action or ask your own question.

13
Should a Floyd Rose bridge be parallel to the body of the guitar?
5
Does an adjustable bridge need to be parallel to the frets?
5
Floyd Rose string tension and action question
3
Why can't I tune my Floyd Rose Tremelo?
3
How do I fix frets rattling on new Floyd Rose guitar?
2
Standard Jazzmaster HH bridge/saddle height adjustment
2
Clunking/clacking bass
0
Can't properly set up floating bridge in strat