In Sword Art Online - Swordland (Main Theme) (https://musescore.com/user/13887436/scores/4364901), it goes through a series of modulations and was wondering how the modulations work and how they prepare for it.

It begins in E minor and from what I can tell, beings to prepare at measure 9 to a modulation to C#m that happens in measure 11. Measure 9 contains the chords F#m7, D#dim, back to F#m7 and measure 10 is G# which is the V chord of C#m. 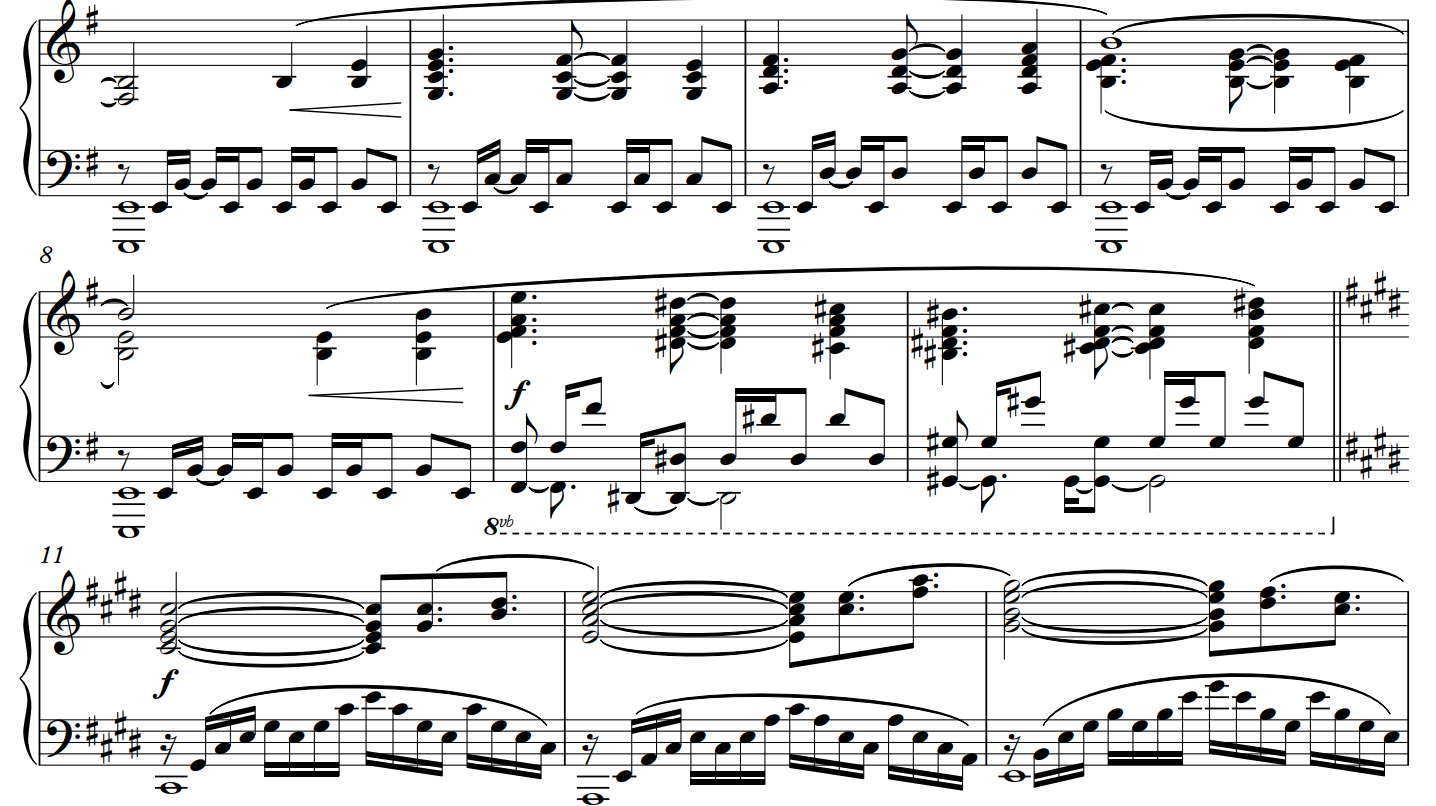 My question is why does the F#m work as a preparation?

Although the right-hand has an apparent F#m chord, when the left-hand is included, the chord is revealed as a D# half-diminished chord. D#m7b5 (half diminished) is the ii chord in the key of C# minor. It's followed in the next measure (m. 10) by G# major, which, of course, is the V chord. So, measures 9-11 form a ii-V-i progression in C# minor.

Note that the E in m. 9 is a suspension from the previous measure, and is not part of the overall harmony of m. 9.

Let me start with the first question: all those chords in bars 9 and 10 iv -> ii -> V7 -> i cadence in c# minor. This cadence adds the sharps that would change e minor to E Major, so it feels like a lift to E major, landing on its relative minor, c#.

Bar 19 There are some similarities here. In bar 9-11 we moved from e-minor to c#-minor, down a minor 3rd. In bar 18-19, that's happening again: c# minor moving down a minor third again to b♭. But the difference is that in 9-11, the cadence strongly led to the NEW key, while in 18-19, it very strongly leads to the old key, c#. This isn't really a modulation at all-- it's quite jarring, and deliberately so.

The same thing happens again in bars 25-27: a big set-up for a landing on e♭ minor, but instead jumping down to c minor. So in each of those cases, they are landing a minor 3rd down from where you'd expect.

Imagine a movie trailer with a lot of sudden cut scenes. This is kind of the musical equivalent of that-- a series of musical cut scenes.

So what holds it together? The constant repetition of a couple of rhythmic / melodic devices in the right hand: first a 3-3-2 division of 8, and later, then a kind of buhhhh-buh-buh-buhhhh in bar 11, which has a 6/8 feel and can be counted 1, (2)-and-a, 1, (2)-and-a. . . In both rhythmic devices, the scales mostly move in a very similar way: holllld-step-step-holllllld.

A simple answer is - yes, the ii V I sequence is so strong that jumping straight into a ii V I in a new, unrelated key is a common device. (It leads us into C♯ minor, not E major, here.)

Not the answer you're looking for? Browse other questions tagged analysis modulation or ask your own question.

6
How does “The Simpsons” main theme work?
3
Questions on the harmonic analysis of Pixar's Up Main Theme
1
Can we understand subdominant/dominant chord functions in terms of them being tonics of other keys?
1
How does Modulation in Spirited Away - Name of Life work?
1
Modulating from Bbm to Cm in Sword Art Online - Swordland (Main Theme)