I am learning about modes and trying to apply them on guitar over chord progressions, and I wanted to understand how exactly to know, when you hear some song, "ah, this song allows me to play Dorian in A over it, or Mixolydian in G over it", etc.

I found a method of determining this here, quote:

In the son.g Oye Como Va by Santana, we have the following chords: A Minor - D7 If you look at the Harmonized Major Scale, you'll see that this corresponds to a: ii - V, in the key of G Major. Since we're playing the G Major scale over a chord progression that's tonal center is A Minor, we know we are playing in A Dorian (The 2nd mode of G major is A Dorian).

Having this information, I tried to practice it, by applying it to other songs. I took for example "Fly Away" by Lenny Kravitz. The song has the chord progression:

...and here is where I am stuck. If I look at the chart, the combination of A and C appears at:

I tried these assumptions and the A Dorian sounded really good (to my ears, subjective) on Fly Away. And this is where I get confused, because I feel like I chose the option totally randomly based on just occurrences in the harmonized major scale chart. So I guess the correct answer was: option D) with A Dorian, but why not the others too? Why are the other options wrong, did I misunderstood the method of identifying the right mode?

How do you know really know a mode fits in some key, when you see a chord progression?

This may well be perceived as a dupe - there are already lots of similar questions on this site.

However - you consider A Dorian. Let's look at the notes from A dorian. A B C D E F♯ G. The chords for the song are A C G and D. There's certainly a 1 and 3 from each of those chords in the whole mode - C&E, G&B, D&F♯, but it doesn't bode so well for the A- A&C gives Am. Which usually sounds fine in a Bluesy way over A major, so 'it works'.

You consider A Locrian - A B♭ C D E♭ F G. Lots of clashes there, but with Locrian, that's par for the course!(Read later).

You also consider A Mixolydian - A B C♯ D E F♯ G. Some clashes there too.

When a piece has only diatonic chords/notes it is easier to use one scale - the diatonic of that key. However, when a set of chords is not diatonic - A C G D is one example - then it'll be a sort of compromise to use one mode throughout. Better, maybe, to play with the changes. By using notes which work with a chord and the following chord, the transition can sound very smooth. Example: finish the A bar on an E note, and that could even be tied to the first part of the C bar.

And, as an aside - your Locrian isn't right. A Locrian has the parent key of B♭.

Completely agree with Tim above. In case a helper sheet may be of use, here is my mine listing the modes, keys and chords. HTH - catz 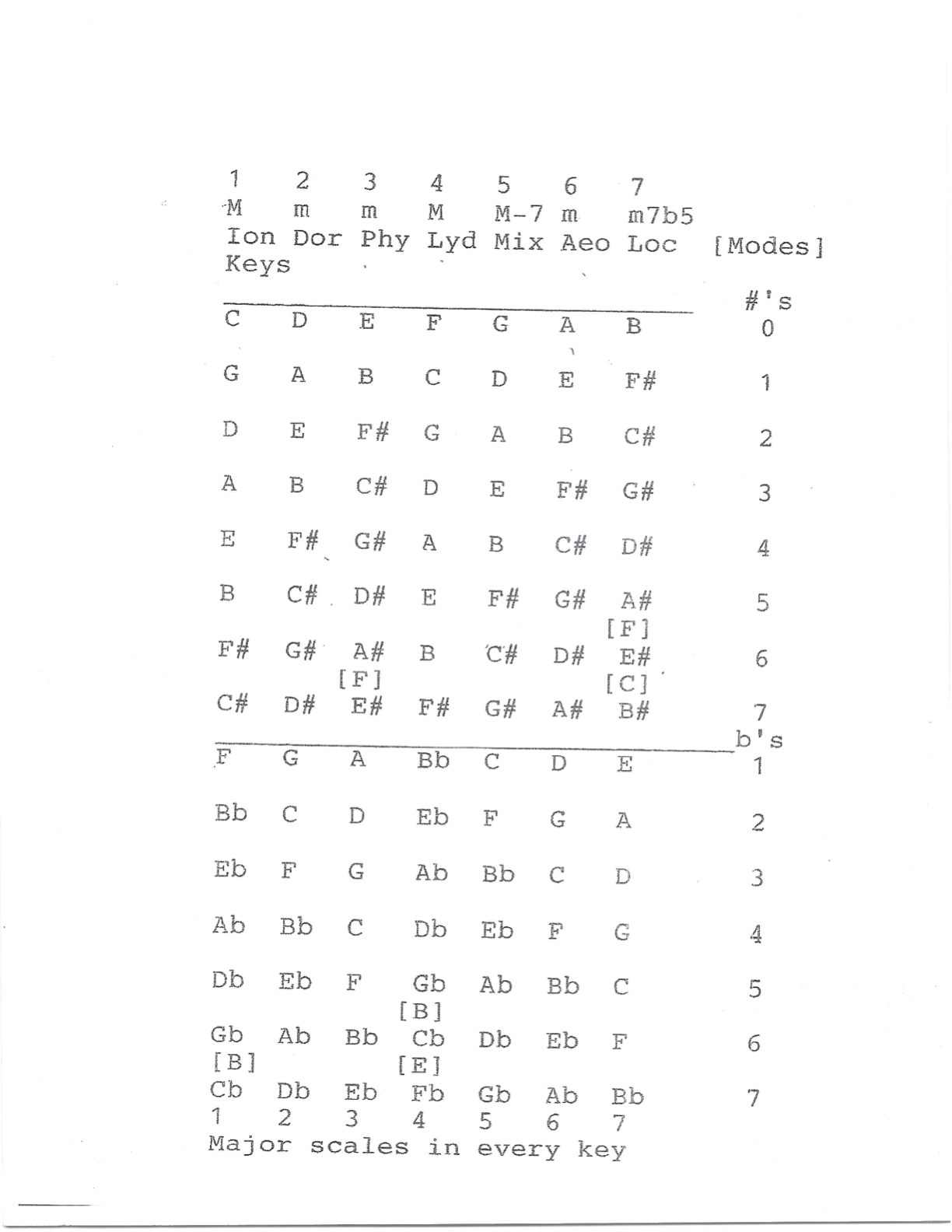 Not the answer you're looking for? Browse other questions tagged theory electric-guitar chord-progressions modes or ask your own question.

10
Using modes and static harmony
10
When to use different scales or modes over chord progressions?
11
Do modes exist in the harmonic / melodic minor scales?
1
How to use modes in popular music?
9
What's the value of modes?
2
Modes over II-V-I
3
Which chords belong to a mode?
3
Does borrowing chords from a parallel mode change the key?
2
A Dorian scale/chord progressions