It's not really clear in the LilyPond documentation (or at least, I haven't found it) as to when you should use << something >> or { something }. It does seem to matter, since when I used braces for my staff group I got one part, then the other in sequence, but when I used the double arrows it engraved correctly. Is there a guide somewhere for when to use each type of container?

It’s really just what these each mean in and of themselves that counts:

Ergo, a'4 is a music expression.

Enclosing a note in braces creates a compound music expression.

Ergo, { a'4 b'4 } is a compound music expression. Everything in between those braces will be processed sequentially.

The documentation in that last section usefully provides more than one example of what you can combine. You can produce multiple lines of music in parallel within a single staff.

Here are some examples of these in practice (although with practice you will find more efficient ways of implementing these):

because these two music expressions are surrounded by chevrons, it means, “display both of these at the same time.” 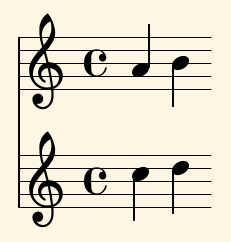 (Note: the music expressions are only of single notes here, but you'll see that a staff, clef, key, and time signature are created automatically. LilyPond provides those as defaults if the user does not explicitly enter them.)

How you choose to combine these is entirely up to you. Some will become apparent through practice:

Or, another much more common use case is multiple instruments playing together:

You can even start to come up with more complex use cases:

I've been puzzled by that too, and didn't find a reference either, but this is the way I look at it (which may be incomplete or even partially wrong):

Examples of the first are:

Both are listed in the cheat sheet.