Usually at the end of playing a set of notes, I have noticed guitarists move a string up and down on the last note of that part (although not so much such that it classifies as a bend).

What is this for? Some kind of smoothening out of the note?

I have seen Eric Clapton do it a lot so don't know if it's a personal thing or a guitarist technique for better sounding music.

If the description above is not sufficient, watch 2:33-2:35 of this Clapton video to see what I mean

The particular vibrato that Eric is using is fairly specific to electric guitar playing. Its side to side motion changes the pitch of the fretted note and can be miminal, so very subtle, to more than a tone up and down. Whilst adding character to the note played (the speed of the vibrato will not always be the same), it also rubs the string across the fretwire, increasing the sustain of the note.

A similar, but different vibrato is used in classical guitar playing, when the finger rolls along the length of the string (all within the fret played on), which not only changes the pitch slightly, but also the tone of the note played.

That is vibrato, which is a common technique with most stringed instruments.

a slightly tremulous effect imparted to vocal or instrumental tone for added warmth and expressiveness by slight and rapid variations in pitch (SOURCE: Merriam-Webster)

A search for "vibrato" on this site will bring up numerous and widely varied questions related to the technique.

It subtly moves the pitch of the note up and down to give a "sweeter" sound.

Here is a video that explicitly talks about producing vibrato on a guitar. It even distinguishes between different types of vibrato and shows in detail how to execute them. 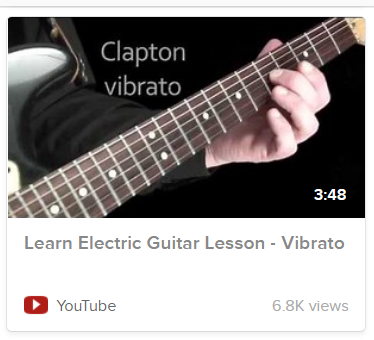 10
Playing clean arpeggios on a lapsteel guitar
3
Heavy metal: how to play and "arc down" shown in tablature
4
Guitar arpeggios and finger practice
1
How to correctly practice right-hand techniques (beginner)
2
Transposing a half-valve note, from trumpet to guitar
3
Am I correctly approaching the relationship between string bending and action height?
1
Is Right-Hand fretting a thing? (Extended Technique?)
6
How to bring all fingers down at the same time learning ukelele
2
How do people play fast tremolo on guitar (with a plectrum)?
23
Why do many classical guitarists move the fingers for vibrato like a violin?