What is the meaning of "M. M." in this tempo mark?

The music is Shostakovich's 7th symphony, the orchestral score; sadly not publicly available as it's under copyright but there are a few versions floating about online. At rehearsal mark 141 the tempo changes to 112 beats per minute, with the mysterious designation "M. M." beside it. 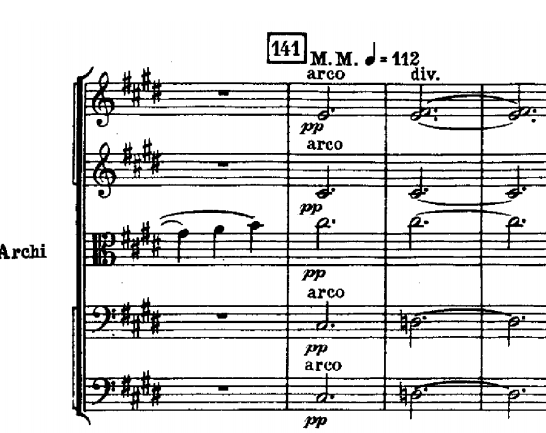 The score switches a few times to that exact tempo earlier in the same movement, but then it is indicated with the name Adagio instead. There's one other version of the score that simply doesn't name the tempo in that part but just says 𝅘𝅥 = 112. Other named tempi in that movement are Largo 𝅘𝅥 = 92 and Moderato risoluto 𝅘𝅥 = 120. This is also not the first time a tempo has been specified without a name; 𝅘𝅥 = 120 appears at mark 111. The score I have includes an introduction but it merely states suggestions for instrumentation (such as getting a second and third snare drum for the first movement), nothing about "M. M.".

This page suggests it means Metronome Marking in either English or German, but given that the score is written entirely in Italian and this is the only occurrence of the term, I am not sure if that is the case. If it is, I wonder what the significance is of attaching it to this tempo mark alone in the 260 page score.

There is no confusion about what tempo is specified, and given that M. M. doesn't appear in at least one other version of the same score is it probably not that important: however it is a mystery I would like to see resolved.

Named after the Inventor Johann Mälzel who is the person who first manufactured a metronome for widespread use (although he did was not the first person to invent such a device, that honor went to Dietrich Nikolaus Winkel).

9
What is Tempo (Speed): Moderate 4
3
What's the tempo?
4
What does the tempo marking "Andando" mean?
3
What is the meaning of "un poco" in "un poco adagio"?
0
(Tempo) Dotted minim/half note = c. 60 meaning
21
What is the meaning of this small vertical line?
1
Why didn't Brahms mark tempo with metronome markings?
4
What is the optimal (and computationally simplest) way to calculate the “largest common duration”?