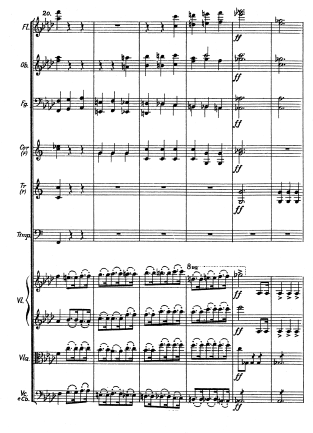 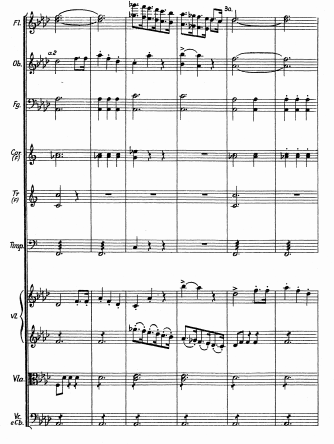 My question is regarding this passage from C. M. von Weber's Clarinet Concerto No. 1. The passage is taken from the exposition of the first movement and has so far been established in F minor.

Now for the harmonic analysis:

So my question is what is happening with the chords in bars 22 - 23 before the Fmaj (6/3) at the end of Bar 23 leads to Abdom7 (7/5/3) by the lower and upper parts falling and rising by a semitone, respectively.

The first violins and cellos are playing in contrary motion by scale, so was it a case of harmonizing between these parts or can these chords be given a harmonic function by way of roman numerals. Are these chords just chromatic ones chosen for their bass notes and such to fit the scale? Or were they chosen with a chord progression in mind?

The second chord of bar 22 is actually an augmented sixth chord. Notice the fact that the C flat is spelled as a B natural, which is in the 1st violins, which then resolves up to the C. On the other hand, the D flat in the cellos and basses resolves down to also a C. This is exactly how, traditionally, in classical music, how aug6 intervals resolve. So we have a typical Ger+6 - I64 progression.

As for bar 23, the bdim7 functions as a secondary dominant, replacing the usual G7 since it also contains the crucial tritone B-F, which resolves to C-E (up to ordering of the notes in both pairs). The Fmaj is a borrowed tonic from the parallel major, and the subsequent Ab7 is a dominant seventh chord built on the chromatic mediant of the previous F major chord.

1
How does one go about harmonizing stepwise melodies?
2
B - F - A chord in the key of C major
1
Analysis of J.s.Bach' s harpsichord concerto in A Major?
3
Analyzing the following progression
7
Is this really better analyzed in G minor than in Bb?
4
Rootless chords in Beethoven sonata?
3
Suspensions in 'The Long and Winding Road'?
1
Augmented triad in Pathetique Sonata? How does it function?
6
How to compose better chromatic harmony
4
Is analyzing this passage as an expansion of a sequential phrase reasonable?