I have been studying Paul Hindemith's "The Craft of Musical Composition, Book 1: Theory", trying to apply Hindemith's principles to my own harmonies and melodies.

As you may know, Hindemith's two fundamental concepts, Series 1 and 2, are derived from natural acoustic phenomena--the overtone series and combination tones. Series 1 shows the mutual relationship between any given tone and the fundamental tone; Series 2 shows the relative "strength" of intervals in decreasing order.

The appeal of Hindemith's Series 1 and Series 2 for me is their apparent universality--the implications of these relationships, set forth by nature, apply for melody as well as for harmony. And from a physical/acoustics/theoretical perspective, it makes sense to me.

I will leave my specific questions there for the moment, though I could conjure up more.

Can you please provide an example of a melody being altered/improved based on Hindemith's theory? How about a chord progression being altered/improved based on Hindemith's theory? I am desperately trying to apply his logic to my compositions, but I just can't bridge the gap between theory and practice here. Thank you very much.

This is a little hard to answer, because Hindemith was (somewhat famously) idiosyncratic, inconsistent, and unclear with his own theories and analyses. But I’ll answer the best I can.

Throughout this answer, I’ll reference three texts in addition to Hindemith’s own Craft of Musical Composition (Unterweising im Tonsatz):

Now, on to the questions!

Determining the Root of a Melodic Phrase

Of prime importance for Hindemith in terms of melody was the step progression. In other words, the best melodic lines could all be reduced to a succession of different stepwise motions, as shown in this example from Harrison: 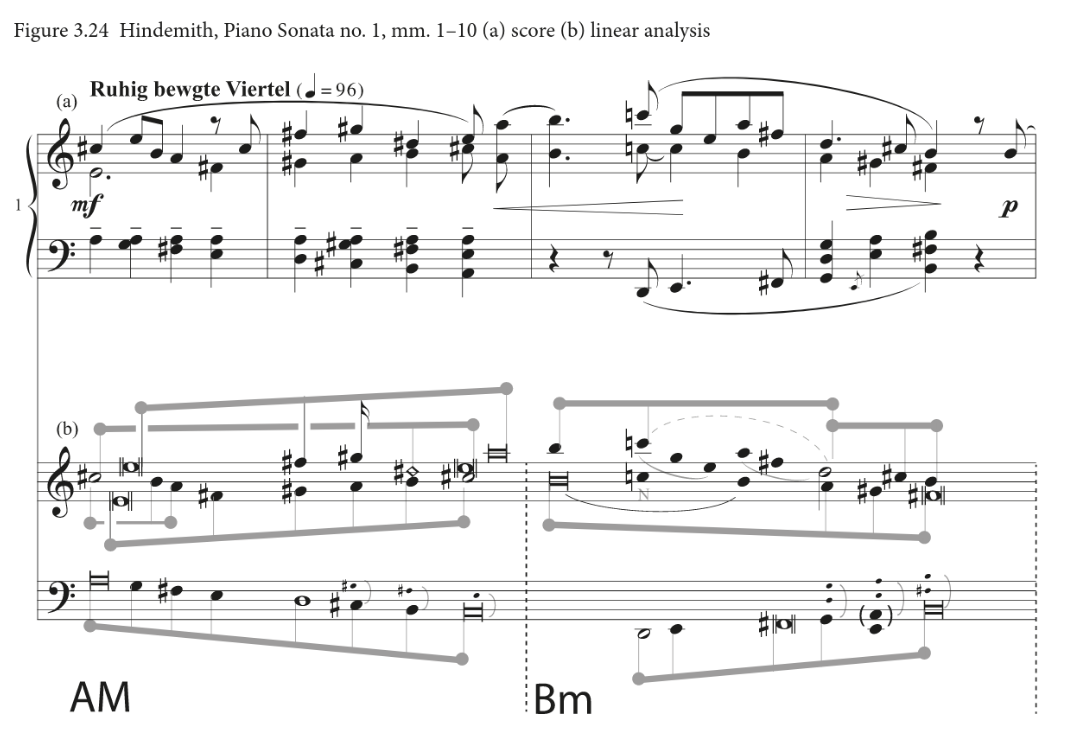 [I]t is the obvious long-range step-progressions that provide the framework for the melody and the basis for analytical decisions about it. The consistency of Hindemith’s practice, especially in the forties, greatly facilitates analysis of melodic activity. (71)

So I think the focus should be less on finding the root of a melodic phrase and more on embellishing clear step progressions in your melodies.

Also important to note is how closely Hindemith integrated his understanding of melody and harmony. So although Hindemith never made this explicit, it seems to follow from his theories that the tonal center of a given progression would also be the tonal center of the melody played along with it. This seems to be confirmed by Hindemith’s own analyses at the end of Craft I, because the only musical example where a tonality is not definitively given is that of the Dies irae chant: the only single-line (that is, unaccompanied by harmony) example in the book!

Determining a Coherent Succession of Roots

I’m afraid my answer here will be disappointing, because Hindemith quite simply never made this clear. The overarching logic is relatively straightforward, as Harrison states:

Hindemith in particular then reimagined the succession of dissonances and consonances as “fluctuation” among chord groups. Resolution, in this scheme, is motion from a more to a less dissonant chord group. (4)

But anything more specific was never explicitly stated, as evidenced by both Harrison:

[U]sing harmonic fluctuation as a pedagogical rather than an analytic tool...is all the more apparent in Hindemith’s well-known graphic analyses, found at the end of volume 1 of the Craft; his prosing of analytic results is meager, and no judgment calls are discussed, nor any find points of practice. (His analysis of Schoenberg’s op. 33a produced mostly group IV chords, for example, but this uniformity and lack of fluxion prompted no comment from him.) (57–58)

[H]ow might Hindemith’s Unterweisung relate the student to free composition? Regrettably, the practical application of Series 1 and 2 is not uniformly clear in Hindemith’s writing. (42)

Determining the Best Interval of a Chord

This one, thankfully, is relatively easy to answer!

Neumeyer conveniently summarizes the rules regarding chord roots and how they were changed and strengthened between Craft I and Craft IV. But your conundrum is pretty succinctly cleared up:

if two intervals of the same type appear, the one whose lower note is nearer the bass has the chord root (56)

The logic should be clear, as well: since Hindemith’s theory is completely based on the harmonic series, the lower-sounding note will therefore have more command as the chord root.

In your example, then, you have two perfect fifths: A/E and C♯/G♯. The chordal root will be either A or C♯, depending on which note is closer to the bass.

There’s quite a lot to say here, but thankfully Debruslais devoted an entire chapter to this very issue: see his “Theory-based Revisions” that begins on p. 177, including a list of revised works on p. 178.

He divides his chapter into three case studies: examples with “minor revisions,” like that given in Example 5.11 below; examples with “similar basic outline, yet significant background revisions”; and a final example of “a fully reworked song, bearing no similarities to the original,” like that given in Example 5.17 below. Since this material takes up an entire chapter, I hope these two examples will be enough to whet your appetite. 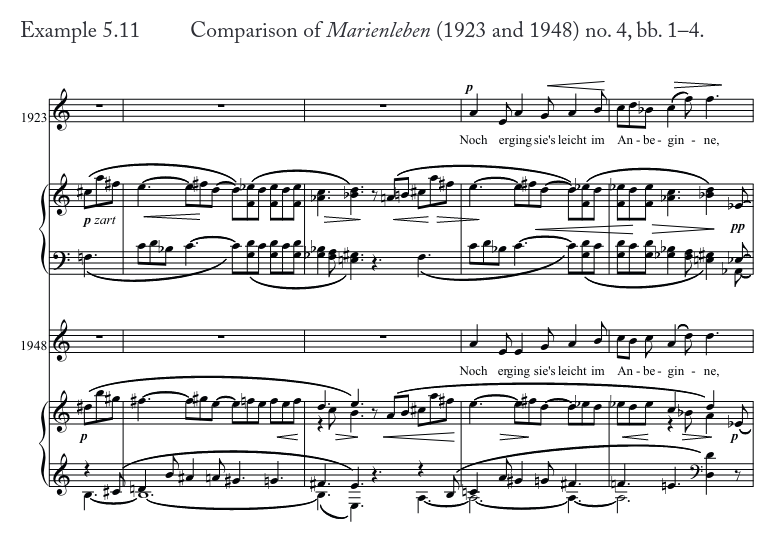 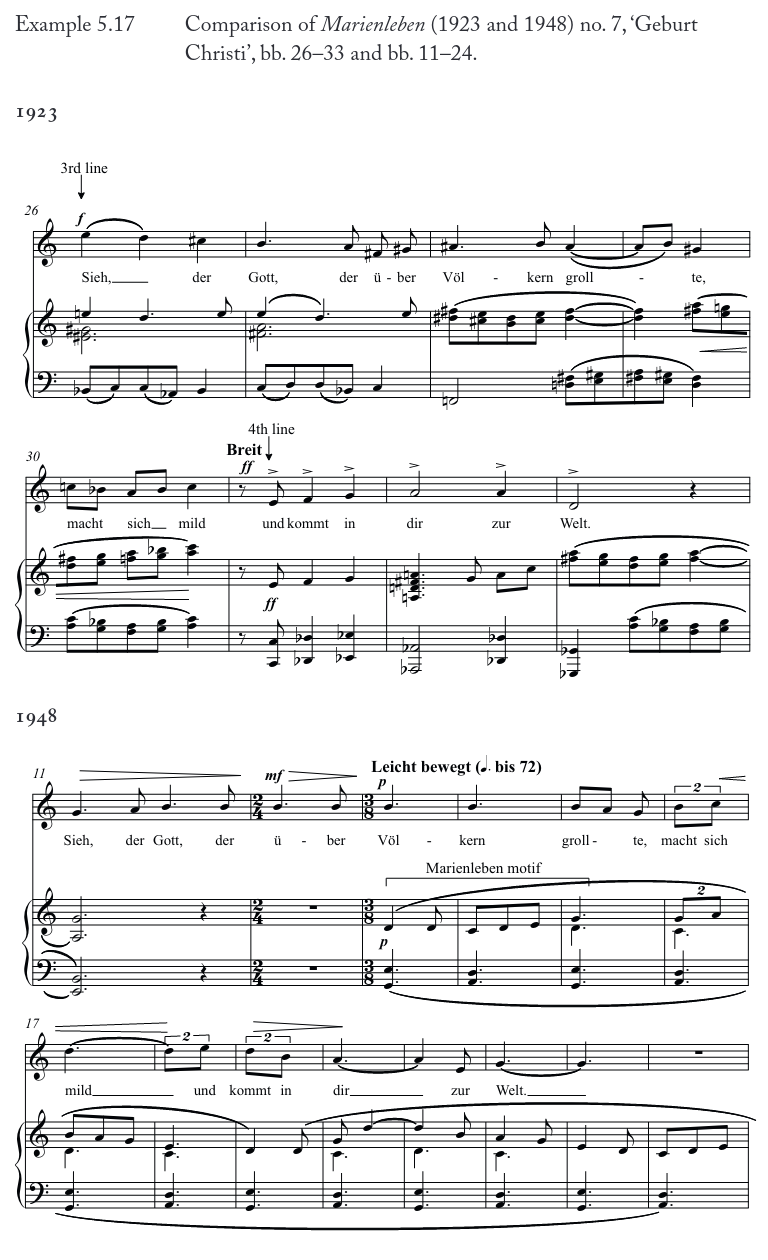 Hindemith was a brilliant mind, and he was the first theorist I ever really read back as an undergraduate; his discussion of the overtone series really spoke to me as a brass player, because that was my bread and butter! He's not only important as a composer and performer, but he has also rightfully gone down in history as the first individual to really make a systematized attempt at understanding highly chromatic tonal music. But despite this brilliance, his writings did unfortunately lack the clarity to transmit all of his ideas to future generations.

Not the answer you're looking for? Browse other questions tagged theory harmony composition chord-progressions melody or ask your own question.

20
Guide-lines for creating a simple chord-progression?
3
Question on the harmony in Sweet Child o'mine
0
How to put chords (POP-EDM) under a given lead vocal melody (starting from a good knowledge in music theory)
3
How do I approach music theory practically?
2
Diatonic harmonic function of chord inversions
2
How do I harmonize a C major scale in fourths and then apply negative/mirror harmony?
2
Chord Succession vs. Chord Progression in Douglass Green's "Form in Tonal Music"
2
Applying schemata to chords other than I IV V
5
How would one go about composing a Tintinnabuli piece?
2
In Hindemith's terms, how do I classify this melodic gesture?