I have a passage that I am trying to analyse with roman numerals: 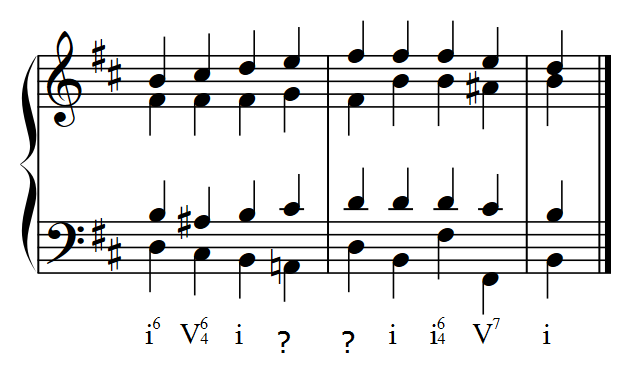 The passage is in B minor, but the section in question briefly tonicizes D major - the relative major key.

My question is, how can this section be best analysed with roman numerals? (I would imagine something like "V/?" "I/?" would be better than simply writing "VII" "III".)

I recommend trying to clearly show the functional role of each chord with your labels. So for this example, you have two options:

The first option is not wrong, but it doesn't clearly show what the relationship between the VII chord and the III chord actually is.

For this example, I would recommend Option 2 every time.

My question is, how can this section be best analysed with Roman numerals? (I would imagine something like "V/?" "I/?" would be better than simply writing "bVII" "III".)

Like most minor pieces this passage in B-minor includes the relative major chord D = III. You will encounter this "modulation" which is actually only a short extension to the relative key by its secondary dominant A7->D (V7/III) in almost every choral by Bach or tune by Handel's Concerti Grossi in minor. As the melody doesn't remain for more than some bars in this new key it's better to say V7/III than V7/I of D, but it wouldn't be wrong, both analyses would be accepted and understood.

(b.t.w. every other degree can be reached by its secondary dominant, also in a major key!

In C major you often find an analogous situation: starting with the tonic C and leading to the relative key/chord like C-G-C-E7-Am-C7-F ... which is I-V-I-V7/vi-vi-V7/IV etc)

Rather depends how briefly! Originally in key B minor, that chord would be designated as i. Making any D in that section III.

However, if the section modulated to feels like D major, then D could be I, lasting until the piece is fimly back into B minor again. If it's such a brief modulation - several barss only - it's best left so that D = III.

Not sure where "♭VIII" would feature, though.

Not the answer you're looking for? Browse other questions tagged chords harmony chord-theory analysis roman-numerals or ask your own question.