I'm having trouble interpreting this chord progression. For example, the three different iv chords shown: does the bass note not affect the right hand? I can see that they are only using "A-E-C", so basically what I'm asking is does it matter how and why, or does it only matter that for a iv chord that my bass note is "A", and I can use any combination of "E" and "C" to make as many versions of the iv chord as I can? 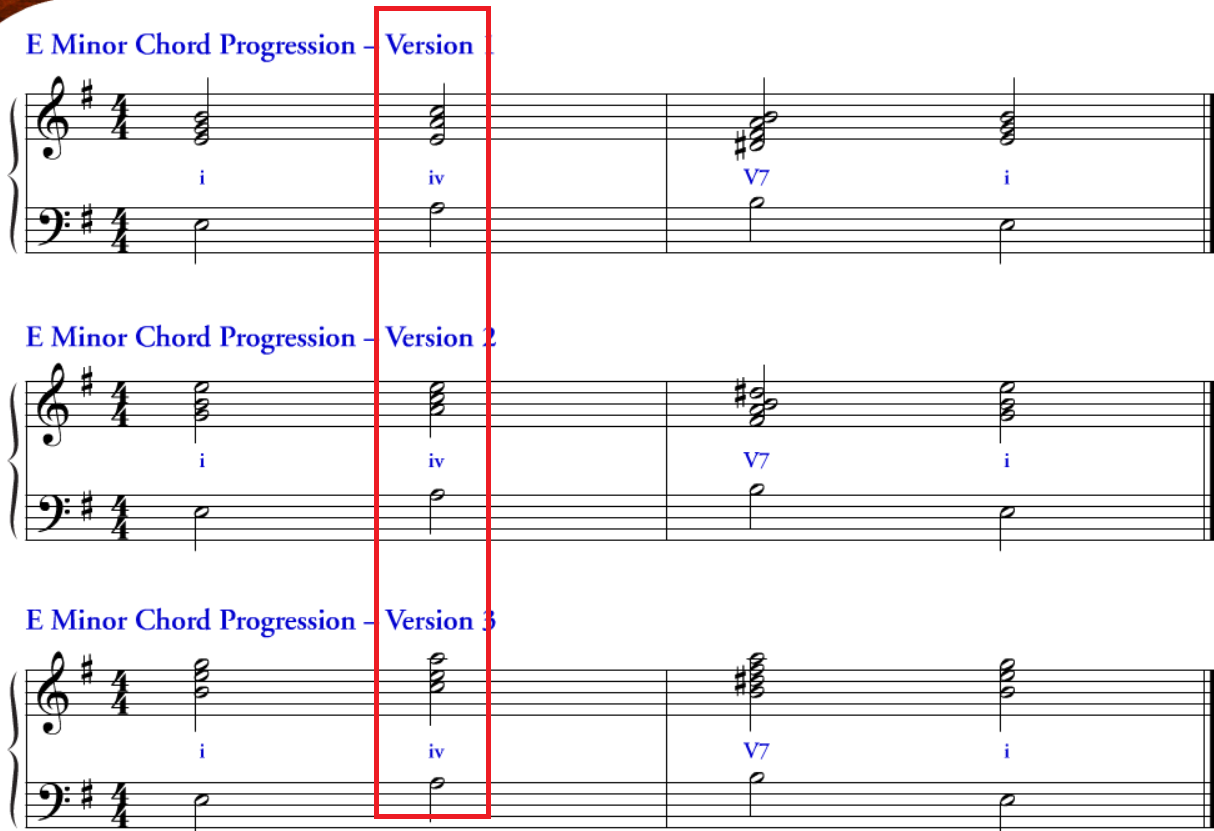 The content shown is not mine and it was provided for free from guitar center when I bought this keyboard machine. Here is the link to the site https://www.emediamusic.com/keyboard-piano-lessons/beginner-piano-method.html.

Sometimes the top harmony note will be mentioned but that harmonically doesn't make much difference. (It may make a big difference in playing though and in the sound.)

Inversions are primarily used to create "smooth" or "more interesting" bass lines. (One can have non-chord tones in the bass, too.)

In the examples given, all the chords are in root position. There upper note (which is usually related to the melody if not part of that melody.)

Chords usually have two positions: in "close" position, the top three notes are as close as possible (no chord tone in between). The second-lowest note may have a larger gap with the bass. In "open" position, each of the top three notes skips over a chord tone. (I can't easily post a staff; I'm working on an easy way). Both of these may be used in the same phrase. In the examples, the chord notes are moved upward from the bass but are still in close position.

Any chord remains the same chord regardless the order or position of its notes. So A-C-E is always A minor -- and thus the iv chord in this context -- no matter what pitch is on the bottom, middle, or top. As long as the only pitches involved are A-C-E, it's A minor.

When analyzing a chord, all parts -- here, both right and left hand -- must be considered. Were we to ignore the left hand and consider only the right hand, then the chord inversion changes. The right hand plays the chord in various configurations: second inversion, root position, and first inversion, respectively. However, because the left-hand note is A in every case, they are each considered root position.

You seem to have a misconception of chord inversion.

If you look at the r.h. only, the triads are "inverted" but we don't speak about inversion. The triad is defined by the highest tone, the soprano note and we speak about the position of the soprano tone: 8-,3-,5-position.

But instead putting it on top they just put it to just an "E", which happens to be in the middle? Basically why does the first iv chord make sense? Shouldn't the "E" be on top?

If you play with the right hand the chords in root position (which makes sense for a beginner to learn and understand the triads) we have a very unmusical accompaniment and there are parallels of fifths (which are forbidden in traditional western music theory).

So the rule for a good voicing is to keep the common tones of succeeding chords in the same voice. You can control this practice by writing down the chord names and the triads by writing a tie connecting the common notes of 2 chords.

You will also discover that between iv and V there is no common chords and the r.h. is lead in contrary movement to the bass line, when the latter progresses stepwise.

Because the bass notes are always the same, technically each chord is in the same inversion. However, the right hand in this case can really be thought of as practicing the chords in all inversions.

Not the answer you're looking for? Browse other questions tagged piano chords chord-inversions chord-voicings or ask your own question.

1
How to vary chord inversions properly?

11
Is an inversion a different chord, or a different voicing?
0
How would you calculate the name of this C/A# 7th chord?
3
Chord inversion (and voicing) naming
3
Roman Numeral Chords with Slash
2
Is there a common name for this common chord progression
14
When, if ever, are arpeggiated six-four chords really “real”?
1
chord voicing with arpeggiations and inversions
2
Do descending drop chord voicings in the blues work?
2
Dictionary for Reverse Chord Lookup
3
Why only root versions of chords?