When was the concept of a "triad chord" first introduced?

It was not before the 16th century, however, that the concept of “triad chord” was established9.

9. Up until then, actually, the three notes forming the triad were not conceived as a self-standing “harmonic” entity proper, but rather as the juxtaposition of two consonant harmonic intervals (cf. [54], p. 188).

Did the triad chord "as a self-standing 'harmonic' entity", not a "juxtaposition of two consonant harmonic intervals", exist in music theory before the 16th century?

Triads (i.e., three notes comprising "modern-day triads") existed before the 16th century, but they were not understood as "triads". The use of triads becomes more prominent around that time, however, and the theory of triads is believed to have arisen about a century later.

Three notes sounding harmoniously together goes back well before the 16th century. The composer(s) who first put three notes together is unknowable.

But as an example of "triads" occurring in music before the 16th century, here is an excerpt from Guillaume de Machaut's Messe de Nostre Dame, "Kyrie", written sometime before 1365. 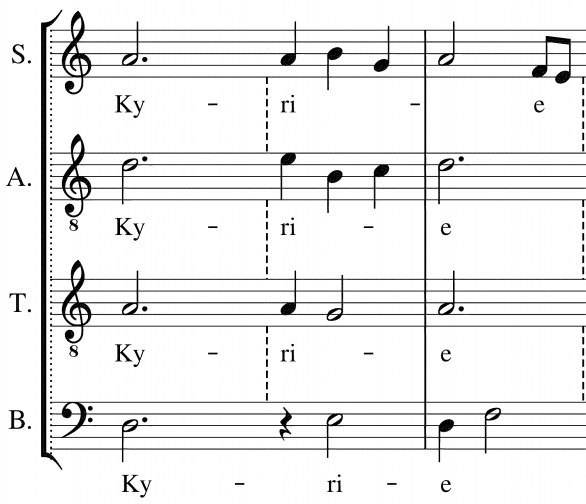 On beat 5, we can find a E minor triad, moving to a C major triad on beat 6. However, these would not have been understood as "triads" in the sense that we use the term.

By the 16th century, the use of triads becomes more prominent, and more clearly headed in the direction of how we think of them now.

Analytically, we have several major and one minor triad, but they still would not have been thought of that way at the time.

From the (Western) music theory perspective, the idea of a "triad" — that three notes form a specific harmonic unit — is generally attributed to Johannes Lippius, in the 17th century. For example:

The reception of Johannes Lippius’s path-breaking conception of the triad chiefly relies upon his [1612] treatise Synopsis musicae novae. (SOURCE)

Jean-Phillippe Rameau is generally credited with first articulating the modern conception of a triad and its musical function in his 1722 Traité de l'harmonie réduite à ses principes naturels (Treatise on Harmony).

Who first introduced the triad into music?

It is not possible to pinpoint a moment when the triad was introduced, much less an individual responsible for it.

Even considering theory, we can't say when people started thinking of triads as triads; we can only say when they started writing about them, and even then there is the possibility that the first written records of the concept have been lost. Bertoglio says this happened in the 16th century. I don't know what treatise she might have in mind.

Even sumer is icumin in, among the earliest examples of polyphony, attested from the first half of the 1260s, is basically an F major chord alternating with a G minor chord. But such an analysis is completely anachronistic, as nobody would have thought of it like that for the next few centuries.

Aaron mentions organum, which is documented from roughly 400 years earlier and may be (again, anachronistically) analyzed in terms of parallel inverted triads.

Not the answer you're looking for? Browse other questions tagged theory chords history intervals or ask your own question.