Does tempo affect use of non-harmony notes?

Writing a four part piece for strings at a very slow tempo (55 bpm). On paper, it seems as though the non-chord notes I have selected should work, but I am finding some of them jarring. I am unsure if the problem is down to the slow tempo, and therefore the inevitable longer duration of the dissonances, or whether there is some other problem.

The bars concerned are the last two in the picture.

The harmony over the two bars is FM (IV 64) and F sharp dim triad, also in second inversion, as I am using C as a pedal point. 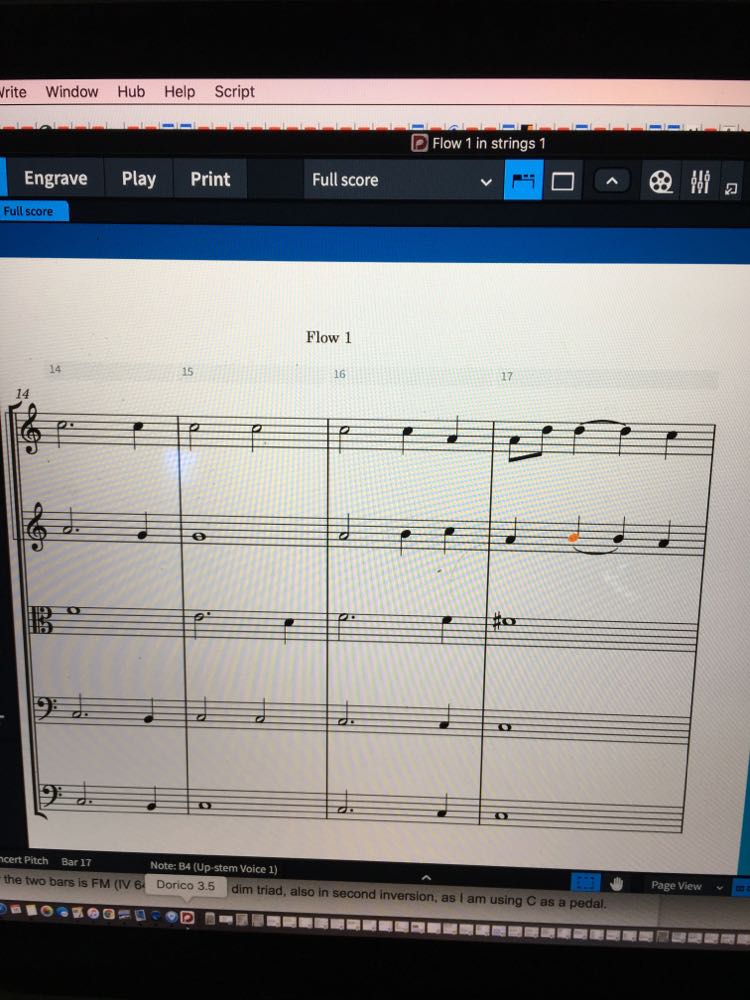 Thanks for your help!

Does tempo affect use of non-harmony notes?

Not tempo so much as duration. A long non-harmonic note at a fast tempo still calls attention to that note.

In particular, in measure 17, the alto B is dissonant against both the bass C and the tenor F# (perfect fourth is dissonant here). Dissonance creates a natural accent, which is further emphasized by the fact that it's also syncopated — also a source of accent — and, by virtue of being longer than the surrounding material — an agogic accent.1

The solution I suggest is to mark the tenor in bars 16 and 17 one dynamic level lower than the other parts and add poco crescendo to the alto part.

Given the preceding material in bars 14 and 15, I don't find this especially jarring. However, it is important to bring out the alto part clearly.

It's easy for the chordal third (A) to get lost in the very strongly present C-F fourth (a dissonance in this context) plus the F-C fifth and C-C octave, which are very strong consonances. This relative loss of the A becomes problematic when the soprano and alto voices move, especially when they cross. The alto part must be heard clearly for the ear to follow the voice-leading properly.

Put another way, the effect is as though the alto is doubling the tenor, rather than the soprano. So I hear a leap of a fourth rather than a step of a major second.

1 An agogic accent is created when one note is longer than the surrounding notes.

On the whole, I think the treatment of dissonance in common practice is consistently the same regardless of tempo. In other words the sense of "harshness" or right/wrong isn't about how long a dissonance is help but rather it's proper handling, the preparation and resolution.

A properly handled dissonance can be held for a long time, milked for drama/expressiveness, resolved properly, and it will sound fine. Do it wrong and it sounds weird. Speeding up the tempo or shortening the dissonant note value will only disguise the problem. Perhaps it will be less noticeable, but it will probably lack an authentic common practice sound. By "proper" I basically mean handle your dissonances according to standard non-chord tone definitions you find in most harmony textbooks.

In some ways you could say slow tempos invite holding dissonances longer. If a piece is very slow with little rhythmic movement, strong dissonances can aminate the music and give it forward drive while still being slow.

The other thing worth mentioning is taking care with chromatic dissonances. Relative to the tone of resolution, dissonances above tend to be diatonic while those below can be chromatic half steps that act like temporary leading tones. You could have dissonant chromatic half steps above, but probably in some kind of "borrowed" harmony context which just reframes what is diatonic. The main point is chromatic dissonant tones can stand out as very "wrong" if they aren't handle right.

Not the answer you're looking for? Browse other questions tagged chords harmony classical-music tempo nonchord-tones or ask your own question.

5
Is this a form of cadence?
3
Dissonances with bass versus in upper voices. 4-part harmony
1
sharp ii dim 7th: How to use?
2
Unresolved, non-dominant sevenths in SATB chorale harmony
2
Four part writing: Does quality and amount of dissonances affect use of non harmony notes?
2
Four part Writing: When must a perfect fourth be resolved?
2
Melody harmonisation: How to handle leaps?
2
Is there a mistake in this four-part composition