Do all periodic or "natural" sounds contain major chords?

This seems to be the implication from what I have seen posted on here. If this is so then it is quite profound, because then even in any complex sound wave without a clear pitch and with many partials that are not whole number integers, in amongst that 'noise' you will find harmonics and therefore tonality.

I'm not familiar with the term periodic sound, but inharmonic partials would make a waveform not periodic.

I think the thing you are talking about, the overtone series where the first bunch of overtones outline a major chord, is about a vibrating string. It's not about "all natural sounds." At least that is the historic origin as I understand from my reading. Chord of Nature and Klang are topic to look up regarding the music theory history.

...This seems to be the implication from what I have seen posted on here.

I'm not sure if scientific rigor is the main concern in your question, but I'll share a little personal anecdote. I took some music appreciation courses in college, and in one of those courses the teacher demonstrated the overtone series on a piano by holding his finger on the various nodes of a string to show the relative strength of the first overtones outlining a major chord. The rest of the talk was basically, every note contains a major chord, this is the work of nature, it sets the major triad as humanity's basis for consonance and dissonance.

There is a kind of dogmatic thinking about it. No proof is given for why the presence of those overtones, on some instruments, should then determine the sense of dissonance. By the same reasoning you might as well say everyone's favorite color is blue, because that's the color of the sky! If you want to have some pseudo-scientific, non-cultural explanation of consonance, then it's easy to accept the idea. It's been repeated many times on this forum.

Just to be a bit nitpicky, 'periodic' and 'natural' aren't necessarily the same thing. In fact I will go as far as to say that no 'natural' sounds, by what I think would be a reasonable person's definition of 'natural', are entirely periodic - you can usually only create something close to genuinely periodic with electronics.

Anyway, back to your question. Certainly not all periodic sounds 'contain major chords', for the reasons given in Edward's answer. However, there are a bunch of sounds that tend to contain most energy at the frequencies of the harmonic series, and which tend to have most energy at the lower harmonics. They will therefore tend to have prominent first, third, and fifth harmonics, which do correspond to the root, fifth, and third of a major chord. If you try sweeping a resonant filter on an analogue synth, you can quite easily pick these frequencies out.

Of course these sounds usually contain energy at a bunch of other frequencies as well, but you could still reasonably say that there are some sounds that do 'contain' major chords. Importantly, these are often the kinds of sounds that man-made instruments produce.

So while it's not true to say that all periodic or “natural” sounds contain major chords, we can observe that many instrumental sounds do, in a way. Of course they also 'contain' other chords, so there's nothing super special about the fact they 'contain' major chords.

If this is so then it is quite profound, because then even in any complex sound wave without a clear pitch and with many partials that are not whole number integers, in amongst that 'noise' you will find harmonics and therefore tonality.

Yes, it is quite profound! It means that the perception of timbre and the perception of harmony are highly-related... in fact you could argue that they are simply different ways to think about the same phenomena.

A simple example - if you play three sine waves at 100Hz, 300Hz and 500Hz, you could think of that as a single note with 3 harmonics, or a particular voicing of a major chord (with the 'timbre' of each note being a sine wave).

You can try to make this - and other 'chords' - from the harmonic series at https://meettechniek.info/additional/additive-synthesis.html.

Here's quite a nice little 'is it a chord, is it a note?' set of sine waves: 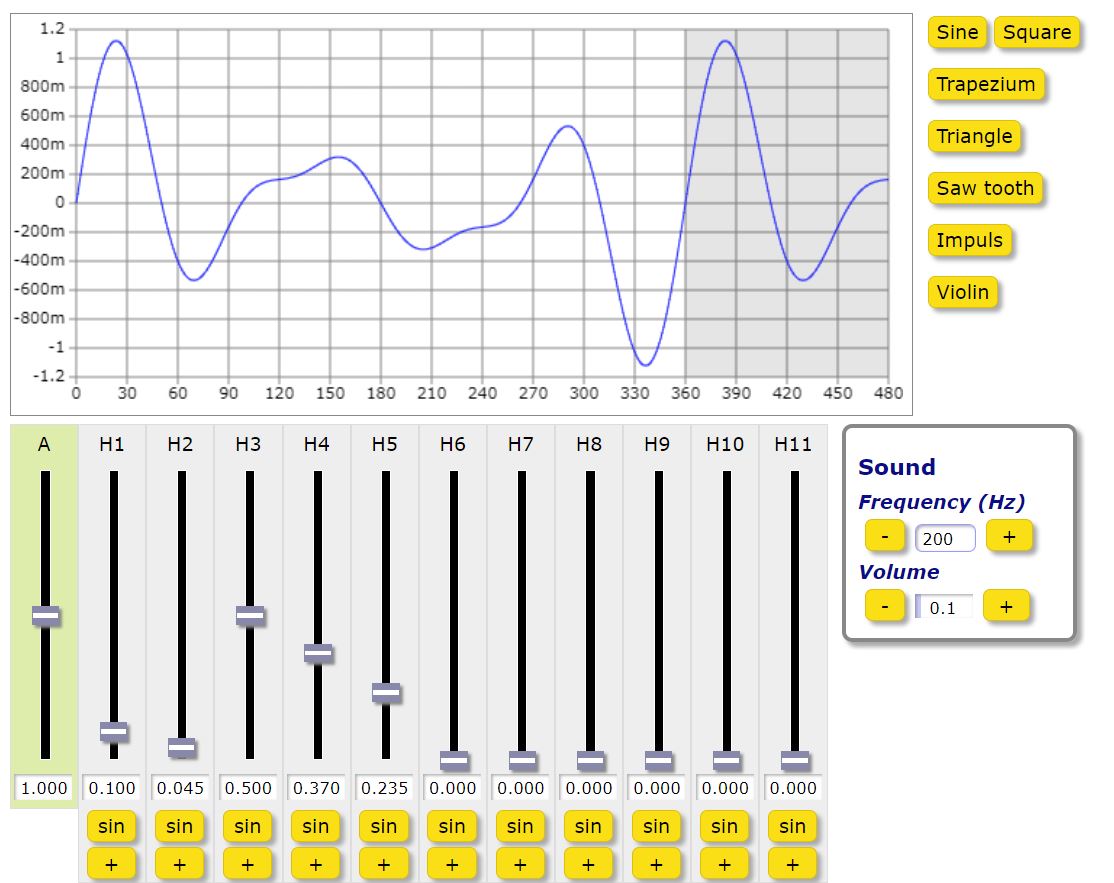 The question is a little bit ill-posed, as the term natural is not well defined. I'll try to clarify from my point of view which is that of a physicist and musician.

In physics, the simplest equation to describe wave propagation is the d'Alembert equation. In one spatial dimension confined to a certain length (eg a string, or a column of air, but not bell or a plate (those are 2d)) yields the constraints that all sine waves with frequency a multiple of a base frequency are a solution to this equation. Moreover all superpositions (additions) of a solution are again a solution. This is where the overtone series originates from.

If such a system (a string, etc) is brought into oscillation, this is usually done with stimulus that contains all (or at least a lot of) frequencies, such as noise or a hit. The system then picks out the frequencies it "likes" which are all integer multiples of the base frequency. And thus the sound will likely contain a major triad.

This is only the most simple case of the description of what happens in nature/reality.

Not in the sense that we usually take a "chord" to mean. A single C note played doesn't have a harmonic the next E up or the next G up in it. It may have one at the G an octave up from the next G up, though (third harmonic) and there may be one much higher up that happens to be an E but if it had both, that series of notes is not what we typically think of as a chord (maybe a C12+23??). So the short answer is no.