Fracanapa tango meter and how to write it

This is the first measure of the accordion part of Fracanapa, a Tango from Astor Piazzolla (you can easily find it on YouTube). 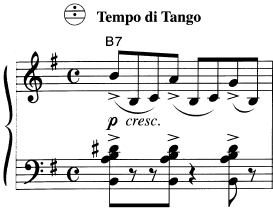 In the first 19 measures the meter of the accordion part is 3,3,2 and you can understand it by the accents and the slurs.

I was wondering if (at least today) wouldn't be better writing it like this: 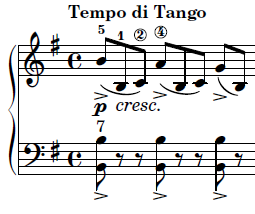 Would that be correct? Wouldn't that allow you to better grasp the meter of the piece?

Except for older vocal practice (where the beaming follows the syllables), beams are strictly following the indicated meter and are an important performance indication. Indeed, the beaming you suggest would strongly suggest playing triplets.

It is particularly bad, actually, for notating a Tango Nuevo rhythm that lives from the tension of its strong syncopation. Your suggested notation makes no difference between first and second group of three and thus detracts from the Tango frame being 4-2-2 with the second note coming as a surprise early attack, giving the Argentinian Tango dancer a more cat-like predatory gait than the stiffer stop-and-go of the European ballroom Tango.

I don't completely agree with those who say that the second example suggests triplets: while implicit triplets are considered normal writing practice, they rarely exist since the beginning of the piece (or the section), and at least the first group(s) or bar explicitly write it.

Yes, from a first glance they can look like triplets, but after seeing the first full bar it's clear that they are not (also, the "Tempo di Tango" is an important hint).

Also, when writing, it's important to consider the "target audience" of the score (as in the reader, not the listener). A musician accustomed to that repertoire would never have a doubt about that.

Then, the example referenced by Carl Witthoft is an interesting one to consider.

In that case the rhythm is clearly played for both the melody and the accompaniment, meaning that the actual metre is not 3+3+3 but 2+2+2+3.
This tango style is not that different, though: the whole rhythm section plays 3+3+2, and the melody usually follows a very similar pattern.

Considering this, using the same writing pattern would be coherent (and correct).

The problem comes when any rhythm stops following that pattern.
Let's take a basic rhythm:

Grouping should always follow the meter structure, so it means that then you should theoretically do this:

That is clearly terrible. Any musician would want to throw something at you for that.

The fact is: for meters clearly based on 4/4 (no matter their "groove"), it's usually unnecessary to use those subdivisions. They usually make sense only for complex pieces in which there are lots of meter changes with additive rhythms, so when it comes an actual 3+3+2 you really should write it in that way (even with the difficult writing above).

Then again, it depends on who's reading. For a rhythm section (bass, percussions, etc), it totally makes sense to have a 3+3+2 grouping. As a percussionist, I'd prefer it for this kind of music, since it really makes it clear what is the feeling I've to transmit in my playing, especially if no multiple rests are used: since most percussion instruments don't have a real sustain, having lots of rests is just distracting.
A typical and often preferred writing would be like this (note the staccato dots):

The excerpt provided suggests that the time signature is actually 8/8, and not 4/4 at all.
This breaks down into 3+3+2/8 (just like 9/8 but with the last quaver cut off).

Not the answer you're looking for? Browse other questions tagged rhythm meter or ask your own question.

15
Intended shift of meter in certain songs?
0
How to notate groove/ swing/ shuffle rhythms
0
How to find the most correct meter of a riff or phrase
1
Advice for figuring out unusual rhythms when composing
6
Handling of dotted eighth rests when a "swing rule" is in place, and whether physical note position has effect on it
2
How do 'meter' and 'rhythm' affect the choice of 'Polymeter' and 'Polyrhythm'?
3
Meter and time signature headache
7
How to clearly notate tuplets, both "simple" and "complex," in irregular meters
6
How does 'meter' differ from 'rhythm' in music?
1
Rhythmic analysis examples by jack Perricone