Why does the ii-V-i-IV progression in this video have chords from a different key?

I've been learning about chord progressions and found myself with the one shown in the video embedded at the end of this post.

At 2:25, the narrator selects a software-built-in chord progression: ii-V-i-IV in C# minor. 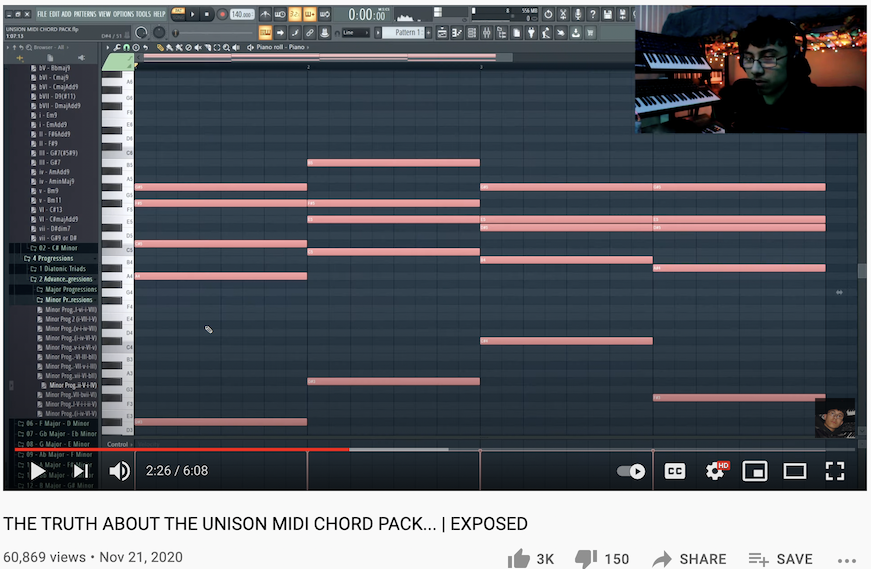 ... I don't understand why the bass note is only used as a bass note for another chord (e.g., Amaj13 / D#). What theory describes this?

Further, when I reverse-search the chords used in the progression (e.g., Amaj13, Cmaj7b5, B6/11), they don't fit within the key of C# minor. Where do these chords come from?

When examining chords, all of the notes must be considered, not just one hand. Also, a chord keeps its identity regardless the order in which the notes appear.

Basic transcription and analysis questions are supposed to be off topic.

But, part of the confusion is the software. The chords are not simply C#m ii V i IV

I'm not going to transcribe and analyze the whole thing, the problems can be understood by the first chord alone.

First, it is not C#m: ii. If we keep it to just a simple seventh chord label, without putting in non-chord tone stuff, it's a half diminished seventh chord which is C#m: iiø7 or in jazz symbols D#m7♭5. If you try using the software progression label, it's confusing, because the actual part isn't simple triads. The V also looks like it should be an altered chord, some kind of Valt7.

Next, the full tones of the chord ascending are D# A C# F# G#, reorder that as a tertian stack to get D# F# A C# G#. That's a D# half diminished with the G# as an eleventh, extended harmony or sus/add doesn't really matter at this point. The important thing is we have a clear root position half diminished chord.

You could reorder the tertian stack using a different supposed root: A C# G# D# F# and call it an Amaj13 with the D# a sus#4.

...I don't understand why the bass note is only used as a bass note for another chord (e.g., Amaj13 / D#). What theory describes this?

Analysis is what describes it. A proper analysis would first determine what the tonic is, but we can just stick with the assumption C# is the tonic and the mode is minor. A bass movement of D# G# C#... - descending perfect fifths - certainly reinforces C# minor.

The question then is why D#m7♭5 is not simply interchangeable with Amaj13(sus#4)/D#.

The answer won't come from just looking up a list of tones in an online tool. You need to understand principles of chord voicing, especially how inversions and the bass work.

For basic, practical harmony, you normally have the chord root in the bass with movement by fifths/fourths. When the chord is inverted other chord tones like the third, fifth, seventh are in the bass, and the bass will move step-wise. Additionally, with extended chords the extensions ninth, eleventh, thirteenth are not normally in the bass.

So, we have the choices of:

It's much more straight forward to say the D# bass is a root to a root position chord than the eleventh of odd inversion of an extended chord.

Follow that principle for the other chord, which are in root position, and then go back and fix the Roman numeral analysis errors of the software label for the progression, and things will make more sense.

15
When playing in a minor key, will the chords be minor as well?
1
Is there a name for this type ascending inversions of a repeated chord?
2
Hearing Chord Progressions
0
The major to minor/minor to major switch
1
What is the chord progression and also the technique used in this rock riff?
9
Can the same song be written in a minor key and major key with the progression written differently?
5
Why is V7->i considered a better resolution than others like vi dim->i in a minor scale?
2
I have trouble writing within the boundries of chord progression
2
Is this passage from the development of K 545 another instance of the Circle of Fifths Progression?
1
why does this Aminor "augmented" progression resolve in Gmajor?