How does one know the implied difference in time signatures? [duplicate]

However, other than people telling me this, I see no way that someone would be able to know this just by looking at the music.

For instance the following example seems like it should be played identically: 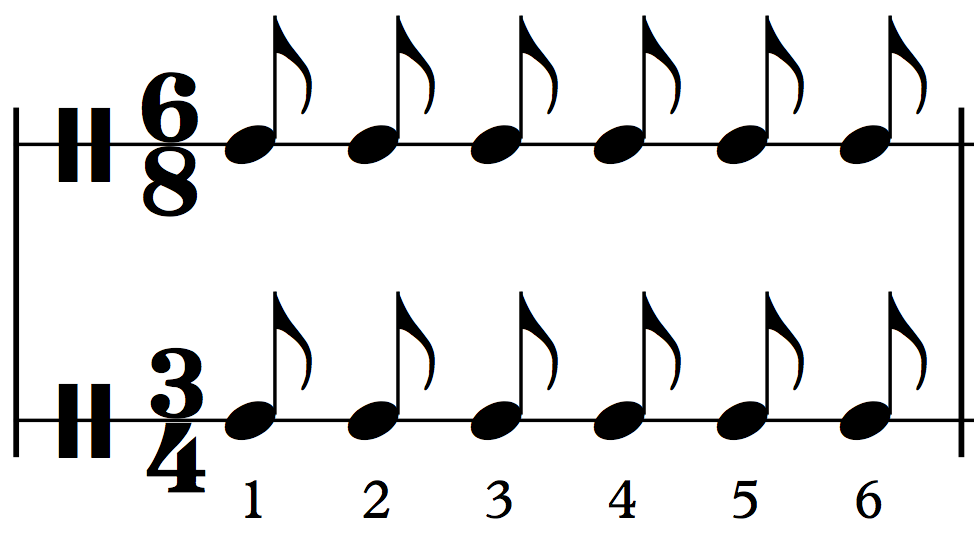 Is there any way to distinguish the difference between how 6/8 and 3/4 music should be played other than just somehow knowing that one usually has the emphasis on two beats in a measure and one on three beats per measure?

Similarly, with cut time and common time, is there anything identifiable (without listening to the song) that differentiates the time signatures?

Looking at the above, I would think:

When looking at the second image, I would think one of two things:

but this would be wrong because I should only count up to 2 (two beats per measure) so instead I'll count (1 e + a 2 e + a) but this is also wrong because that would imply we are in 8/16 time.

So I do not see a valid way to count this. I would very appreciative if someone could explain this to me.

notation time-signatures
Share
Improve this question
asked May 2, 2021 at 0:54

The answer to both questions is the same: it's understanding meter

Grouping beats in twos is duple meter. 2/4 and 6/8 are both duple meters, with two beats per measure. Grouping in threes is triple meter, as in 3/4 or 3/8.

Groups of beats can be combined: 4/4 is two groups of two beats. The first group's accent is slightly stronger than the second group's accent: ONE two THREE four, and because 4 is not a multiple of 3 each beat will naturally divide into two parts. We call this quadruple simple meter.

The time signatures you ask about are 3/4, which is a triple simple meter and 6/8, which is a duple compound meter. 3/4 has three beats per group with beat one accented, and each beat naturally divides into two parts; 6/8 has two beats per group, with each beat divided into three equal parts.

You didn't ask, but we can also combine unlike groups: 5/4 time is one group of three beats and one group of two. Meters like this are called asymmetric. For an asymmetric meter we don't know if it's grouped 3+2 or 2+3 - either will have the same time signature. For those we usually use the beams within divisions to tell the musician how the notes are grouped.

'I see no way that someone would be able to know this just by looking at the music.' The simple answer here is to look at the time signature.

3/4 and 6/8 look very different from each other! That's because they are! And playing your example would come out differently. The 6/8 tune would have an empahsis on the first note (like most music) but also on the fourth. That's implicit in the time signature. Very different from 3/4.

How do we know? By learning it. We learn that to, too and two, or you, yew and ewe all sound the same, but very quickly as kids realise that they are actually all different. So we learn in music that there are different ways in which to designate timings.

However, other than people telling me this, I see no way that someone would be able to know this just by looking at the music.

Of course! Musical notation is written language used by people in a culture. Did you learn to read text by looking at text, without actually speaking any language or meeting any speakers of any language?

It's about culture, conventions, tradition and language. Not natural science, laboratory measurements and math. If you ask yourself "should I write this in 3/4 or 6/8" and cannot tell the difference, then you lack cultural, not theoretical knowledge.

You can't calculate it, you need to get involved in the culture to understand it.

(Paraphrasing my own answer from here How does the bottom number of the time signature affect counting?)

The problem is actually that it isn't always clear even to the composer to decide which time signature is more adequate, as we have mostly motifs of a double bar or even 2 double bar phrases which would fit as well in a 6/8 time signature (I think I have also seen a Waltz notated in 6/8).

So if the 1st point is clear to you I wouldn't bother to much about the difference of these 2 kind of notations. It is not so much crucial as you may think.

Concerning the 1st point: I have written a long time ago a piano piece (polyrhythmic): l.h. 3/4, r.h. 6/8 and vice versa. In this case it is possible to mix the 2 rhythms resp. times, but the notation would be complicated. The solution is to notate the piece in 3/4 and add accents on 1 and 4 of the 6 8th notes. Note the Cello part in this arr. for Strings:

or the first bars for Piano: (unfortunately the software doesn't allow 2 different times in the upper and lower staff ...)

It's not an implied difference.

It's specified in the time signature.

You have to learn to read time signature. They are not self explanatory.

The tip off is in the top number. Basically, if it's a multiple of 3, and the bottom number is 8, then it's compound time and the beat is subdivided by three.

Again, you need to read a book of music fundamentals about rhythm and time signatures to get the full picture.

And that is why we have time signatures!

And, to make it even clearer, we'd normally write it like this.

This is represented as a clear visual difference by the beaming; we connect the flags of the pulses into beams, and we do this according to the beats.

The compound duple time signature 6/8 says that there are 6 pulses to the bar and they are eighth notes (quavers). (As already mentioned) we count the pulses in compound time signatures.

Below is two bars in 6/8, the first showing beats, and the second showing pulses:

Below is two bars in 3/4, again the first bar shows beats, and the second shows pulses:

21
What is the connection between time-signature, beat, and tempo?
0
Can't differentiate between time signatures
7
What exactly is the point of time signatures and measures?
7
Why are time signatures not used in this score?
6
9/8 hybrid vs compound time
5
What can one do to understand time signatures?
1
How to rewrite this rhythm from common time to 12/8 time?
8
How many beats are in 6/8 time?
8
What decides the grouping and emphasis for 6/4?