Update: Thanks all for your responses. As most of you have said, roman numeral analysis isn’t really suited for these kinds of chords. I might decide to just slash chords for bass and then come up with a different way to notate secondary chords and modulations in a functional manner. I don’t want to do this literally because that doesn’t make sense in a tonic-agnostic notation. 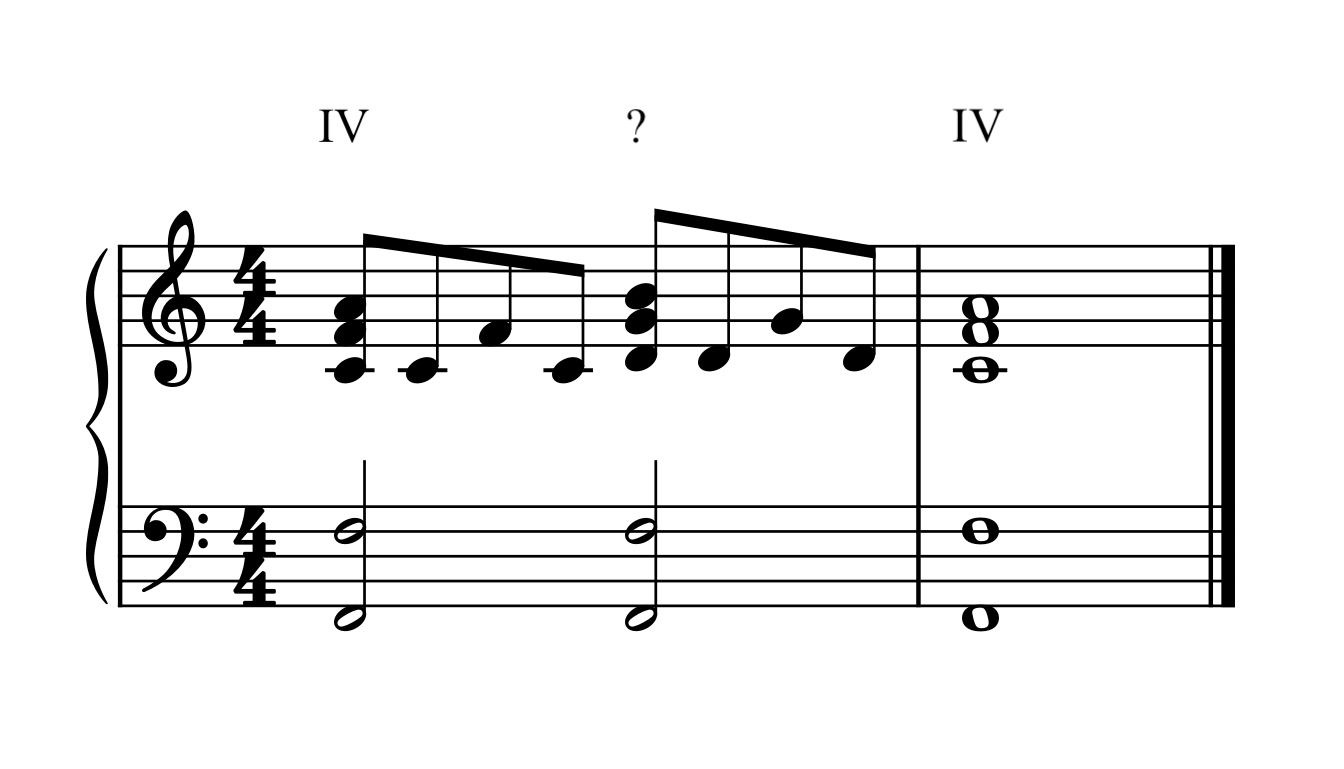 Not fully understanding the dots - it's key C,from the key sig., and the chords go from F to G7 back to F.

That G7 is in 3rd inversion, because the F is in the bass.If it was going to be called V/IV, in key C, that would make it C7, which it obviously isn't, and anyway C7 would be designated I7.

RN isn't particularly helpful in cases such as this. It could be called G/F, which again isn't helpful fot transcription to other keys.

A better way would be to label using NNS - the Nashville Number System.

I see two ways to analyze this. First, it's just a IV-V7-IV with a subdominant pedal. Another possibility is a IV-V42-IV progression. Both give the same note. I think the first describes the music a bit better. It might be worth looking at some of Handel's stuff as he liked the third inversion seventh enough that it's been commented on in the music history books.

"Passing" or "non-functional" chords are not always easy to describe; they often arise from just voice-leading considerations rather than being part of a harmonic direction. (They don't conflict with harmonic functions, they only "decorate" them.)

This is especially common with IV moving to V above a scale-degree 4 pedal, as it does here. And it's exactly the same as the opening of "Part of Your World" from The Little Mermaid: "Look at this stuff" is above a IV chord, and "isn't it neat?" is above a CTV7, that V42 where V is above a pedal of scale-degree 4. It resolves back to IV on "Wouldn't you think..."

I think this label is better than understanding that middle chord as a true V42, because in most cases that V42 is going to resolve to tonic (and typically in first inversion, but that changes based on style and genre). Here it's clearly prolonging IV, and since common-tone chords are inherently prolongational, I think the CTV7 is the best interpretation.

It's triads over a pedal. F, G/F, F. If tempted to call the second chord G7/F, take the idea a little further...

Wouldn't it be ridiculous to call that new chord A♭6/F? No, these are plain triads over a pedal and deserve to be named as such.

But I don't think Roman numbers deal with this very well. It likes everything to be functional.

(This, of course, would be a different matter. Here it IS a last-inversion G7.)

Normally the melody do-ti-la above IV (the subdominant) will be considered (the middle not e) as passing tone. Now together with parallels of 3rd and 6th we get a resoti (V) chord. I think it is most useful to consider this passage as a slash chord and it will help you to transpose it easily in other keys.

I agree that these are modal 'color' chords over a pedal point. The V chord is not functioning as a dominant at all; rather, it brings out the Lydian nature of the IV chord. The Lydian mode gives that faraway, otherworldly sound, and is especially exploited in cinematic music.

You might have better luck with pop/jazz music notation, even though you lose the tonic-agnostic benefit of roman numerals. Check out this excerpt from a jazz lead sheet:

Here we see chords progressing over pedal tones. The emphasis is on readability. Functional analysis is left open to debate - this kind of music can have multiple, overlapping harmonic interpretations.

Not the answer you're looking for? Browse other questions tagged chord-theory analysis roman-numerals or ask your own question.

7
Dominant functioning as a Subdominant!
3
Slash chords nomenclature/reading convention
8
Why is the third triad dominant?
4
Diminished seventh spelling but functioning as an Augmented Sixth?
6
The ambiguity of certain chord qualities in Roman numeral Analysis
3
Roman numeral analysis: Bridge over Troubled Water
4
In what context(s) is the Nashville Numbering System preferable to Roman numerals?
7
Minor subdominant as dominant chord?
3
Beethoven Piano Sonata no. 1 in F minor: What are the first 2 chords of the transition?