Why is The Star-Spangled Banner said to be in key of F instead of C?

This piece is written in Key of F with one accidental - Bb.

However, every B in the piece is natural and there are no accidentals so why wouldn't this be said to be in Key of C?

Every B isn't natural actually. What about this one: 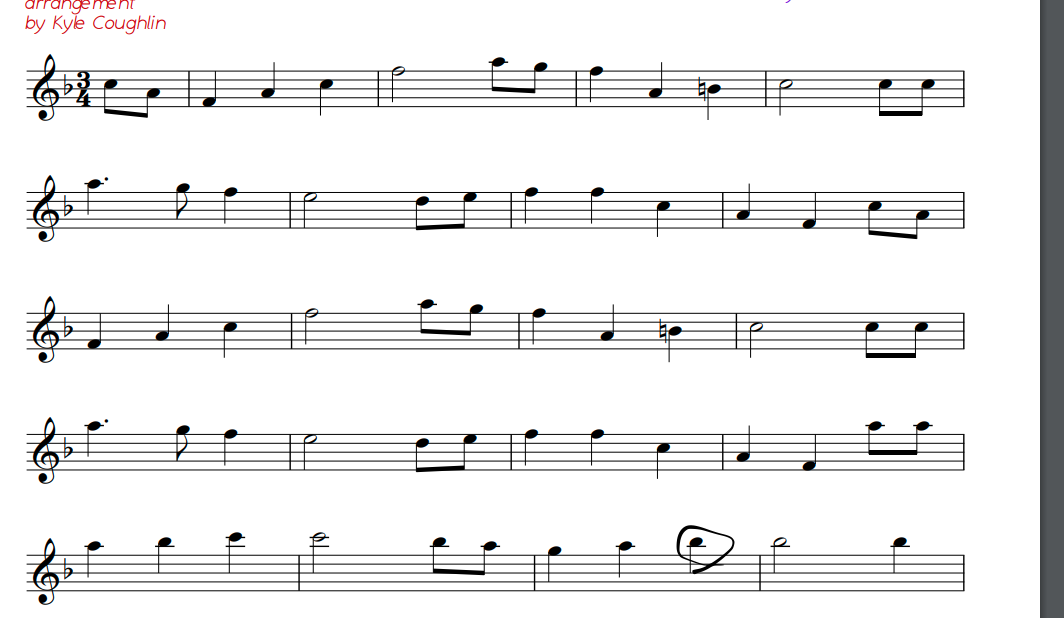 Also if you look at the first F, that's an important note in the song. "Oh say can you see". It's a good candidate for a tonic!

There's plenty of B flats later on. The one B♮ at the end of the middle section is more conventional - a typical journey to the dominant before the tonic restatement of the final section. The final section has nothing that would make you question the tonality as anything but F major.

It is said to be in F major, because F is the tonic note, home note, and the harmony around it is major, meaning that the third above F is a major third, A, and not a minor third Ab. Playing an F major chord sounds like the harmony is at that song's basic center position, resting state. The presence or absence of any particular note in the melody is irrelevant as such, if it does not affect the sense of tonic. B or Bb or neither of them, it doesn't matter.

Or try it the other way around. Tell someone who can sing (but who doesn't have absolute pitch and doesn't remember the pitch), "sing Star-Spangled Banner for me, I'll play an intro for you". Then play the chords C - G7 - C as an intro. What pitches does the person start to sing? Is it G E C E G C? Or is it C A F A C F?

However, every B in the piece is natural and there are no accidentals so why wouldn't this be said to be in Key of C?

This isn't true. There are several Bb flats in the second part. The piece is in F but it is modulating to the dominant C in measure 4, that's why there are some B natural. (Many songs have a similar chord progression to the dominant like this song.)

The melody begins with the triad of the tonic CAF ACF. The whole second section is in F major.

When we have only a melody, like your PDF, the cadences are implied, implied because there isn't full harmony to make them explicit.

A common structural plan is to end one or more phrases on half cadences, which have a feeling of only partial ending and the music continues, before playing a phrase with a conclusive perfect cadence.

A half cadence can be made more emphatic by approaching the dominant from a half step below, from the dominant's leading tone. This is what happens in measure 4 when the B natural is used instead of the B flat of the key signature. That is considered just a temporary chromatic change to make the half cadence more emphatic.

...every B in the piece is natural

All that happens in interior of the tune. The starting and ending are clearly on the F major chord.

It starts and ends on F major, a raised fourth scale degree is used for the half cadences, it highlights the subdominant just before the end. This is a very common tonal structure for music in the key of F major.

The chromatic variation of the B isn't abnormal. It can happen with other tones too. Conventionally the start and especially the end harmonies determine the key. Chromatically shifting around on the interior can be called tonicization or modulation depending on the extent of the change, but those shifts don't change the key of the whole piece. Again, this is a convention, a norm. You could have a piece that deliberate works against that convention and then the key might be an ambiguous/debatable point.

In the days before modern practices, pieces could use a pattern of whole steps and half steps which was consistent with starting on any note of the major scale. These patterns were called "modes", and there were seven of them, which would often be referred to using the following names:

Common practice is to notate the major modes using the key signature that would apply to Ionian mode, and minor modes with the key signature that would apply to Aeolian mode. Thus, when notating "The Star Spangled Banner" or "The Little Drummer Boy" with a tonic note of G, one would use one sharp in the key signature even though The Star Spangled Banner is melodically mostly in Lydian (meaning most of the C's would be sharped) and The Little Drummer Boy is melodically in Mixolydian mode (meaning most of the F's would be natural).

39
Why is music theory built so tightly around the C Major scale?
2
Gregorian modes in Renaissance music (with Cabezón's 'Tiento del Cuarto Tono' as an example)
2
What is the key for “Purple Haze”?
8
Why do we have key signatures as they are? Could a key with unconventional accidentals make sense?
8
Why is the key signature not the same as the listed key?
27
Where do the double accidentals go in “theoretical” key signatures?
7
Why don’t we use the term “scale signature”, rather than “key signature”?
4
Can accidentals be seen as a temporary change in scale?
2
Confused about the key of “Watermelon Man”
1
Why do parallel keys matter?