How do you know which order to play stacked notes in

I’m learning how to read sheet music and I learned Sign of the Times by Harry Styles using one of those yt vids where it tells you the name of the note to play. I know the first notes on the bass clef are C-F-A 4 times but when i looked at the sheet music, it reads like C-A-F. 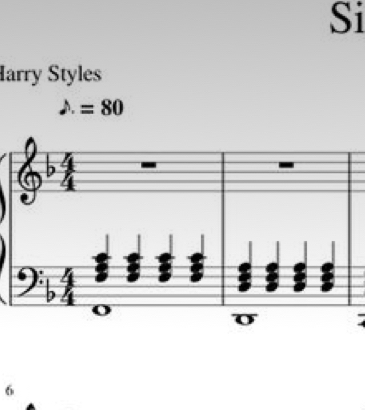 How do you know in which order you’re supposed to play the stacked notes?

piano sheet-music
Share
Improve this question
edited May 6 at 20:53

Those 'stacked notes' are called a 'chord'. You can read the notes in the chord in any order you like, but you have to play all of them simultaneously.

In case it's not obvious: the right hand plays the quarter notes.

The low F at the bottom of the bass clef, also gets played at the same time as the first chord (triad). That's due to it being vertically under that chord. Unfortunately, most players can't reach all four notes with the left hand, so it makes sense to play the triad with the right hand. That also means the low F can be held down through the whole bar, rather than relying on pedalling. The rest in the treble clef is there to say 'nothing is being played here'.

The notes, as answers state, are a chord to be played simultaneously.

OTOH, when the composer wishes for the notes to be played sequentially (the word is "arpeggiated"), there are symbols for them. Here's a simple example: 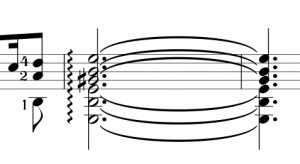 As pointed out in a semi-duplicate question, the default direction is to play lowest to highest. If the reverse (highest to lowest) is desired, there should be a vertical downward-pointing arrow next to the squiggle line.

Not the answer you're looking for? Browse other questions tagged piano sheet-music or ask your own question.

6
Which direction to play chords cello
-2
Are Fmaj7 and C major chord the same in Guitar?

7
Question about reading music sheets
2
New to piano, and Treble Clef turned into a bass clef (giving me two bass). How would I play the notes? Which would be middle c?
2
Can I "dive headfirst" into reading sheet music?
4
When you look at (piano) sheet music, how do you "think about" which notes are being referred to?
1
Question about a song I’m trying to learn how to play
4
Need help reading piano sheet music
7
What symbols on piano sheet music show what hand should play what?
2
How does one know which F (or other note) to play?