Is there a legitimate reason why a C-Clef could ever be used in piano music?

I'm working on a composition that I can't help but to use the C-Clef because it renders neater on paper. This one switched to treble clef twice. But this would be a mess with bass clef and treble clef switching much too often, and I'd still end up with tons of ledger lines. 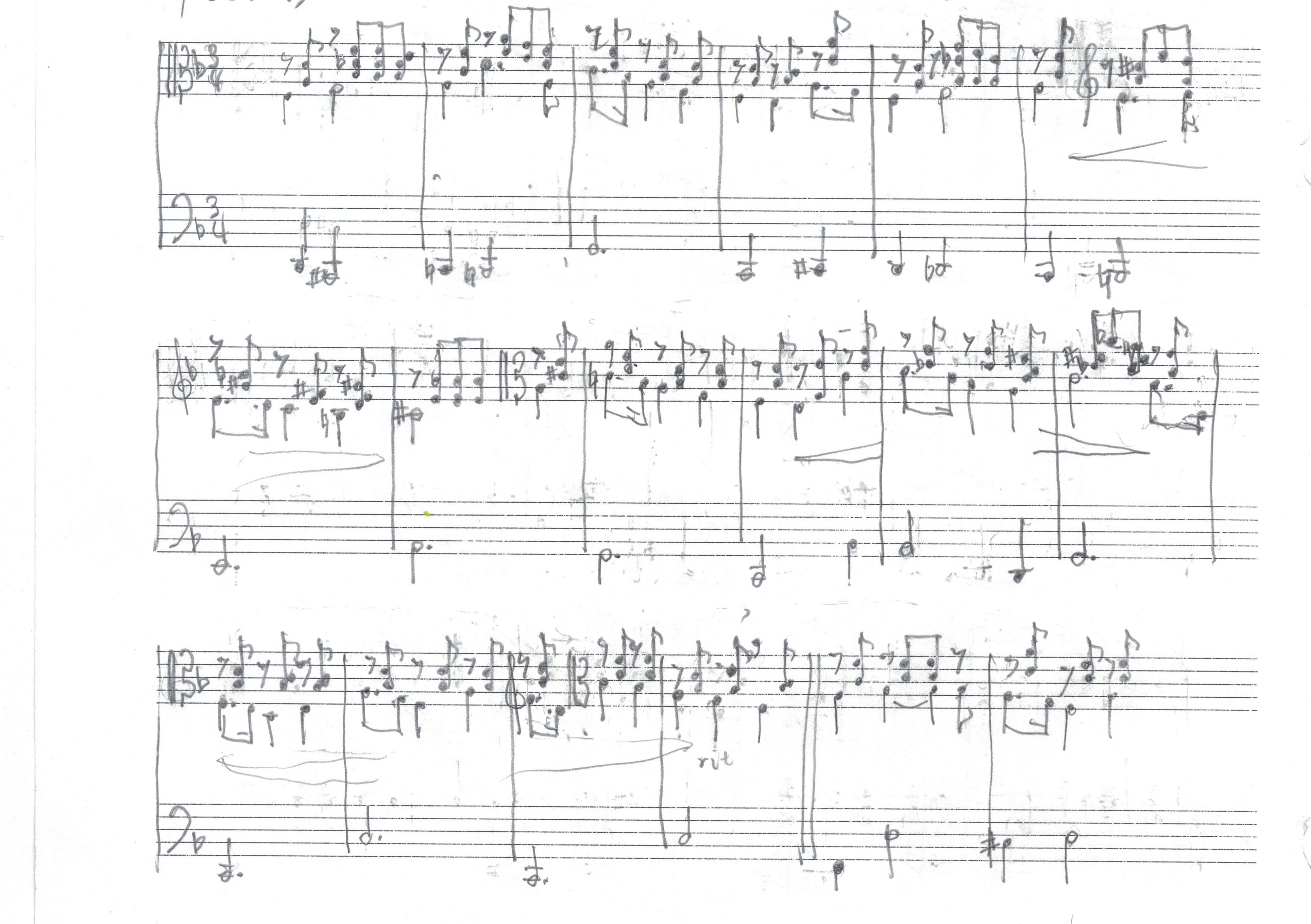 I know for piano, treble and bass clefs are the standard, but is there a good use case for using the C-Clef? Is it fair to encourage or challenge pianists to learn how to read in other clefs, or is it controversial? Has any composer written piano music with clefs other than treble or bass?

piano notation clefs
Share
Improve this question
edited May 13 '21 at 2:32

I don't think a C-clef is necessary.

This gives at most two ledger lines, which is not many at all. If you think you need to indicate the the middle voice is to be played with the right hand, mark it with m.d.

Pianists don't read C clefs. A great majority flatly don't know how, and most of the ones that can (because they play an instrument that reads them) are completely unpracticed at it for piano. It's only the rare person who regularly sight-reduces orchestral scores on piano who would be able to play this.

Don't ever use 8va in bass clef or 8vb in treble, as others have suggested. Pianists are comfortable with several ledger lines and don't mind clef changes.

A C clef is unusual for piano. A C clef is also only one note below treble clef written 8vb or one note above bass clef written 8va. If you want to avoid ledger lines I think choice #2 is better since you don’t want 8ve symbols between the staffs (you learn something new every day @MattPutnam). Having your music played properly and written in a way that is comfortable for pianists is more important than encouraging or challenging players with something unusual in your music.

EDIT: Thanks to @Elements_in_Space for providing notation for my answer. Mickael, on your original score you go to treble clef briefly a few times but I don’t think that is necessary, notice he (or she?) didn’t do it in bars 6-7. There are not many ledger lines and staying 8va maintains the visual shape of the line better.

The reason to write in C clef is the one you've come up with: the notes fit better on the staff. That's how clefs came into being — so that the core range of a particular voice (or instrument) fits nicely within five lines and spaces.

Piano music doesn't use C clef, and pianists will snarl at you for using it, though some are able to read it — usually pianists who work as professional accompanists or who read orchestral scores.

Pianists are, however, very used to ledger lines above and below the treble and bass clefs. Less experienced pianists might complain a bit; more experienced ones won't give it a second thought. If necessary, to avoid excessive ledger lines or collisions with a staff above or below the current one, the ottava (8va-----) is used.

For your own purposes in writing out a score, using C clef is fine. But before giving it to someone to play, it would be much better to enter it into notation software, which will handle the spacing issues that can come up.

Richard suggested that I convert my comment to an answer. Most of the key points are well addressed elsewhere, but I will repeat them here for the sake of completeness.

is there a good use case for using the C clef?

Is it fair to encourage or challenge pianists to learn how to read in other clefs, or is it controversial?

It is both fair and uncontroversial. The problem is that it is also fair for pianists to refuse to accept the challenge, and that is what almost all of them will do. Further, it is uncontroversial because everyone more or less agrees that there's no reason for pianists to learn to play from notation that uses C clefs. As I noted on my comment, writing your piece with a C clef "will reduce the number of performances of your music, probably very significantly."

Has any composer written piano music with clefs other than treble or bass?

Absolutely, and this part of the question is the main reason for adding this answer. Most of Bach's harpsichord music uses the soprano clef for the upper staff. I'm less familiar with the music of his contemporaries, but I imagine that this was standard practice in northern Germany at the time. I don't know whether it was also standard practice elsewhere, or when it changed.

I do know that the use of C clefs for choral parts diminished beginning in the late 18th century, disappearing altogether probably some time in the late 19th century. This probably coincided with a rise in the prevalence of amateur musicianship, meaning that more people with less musical training were reading music, whether in the home or in choral societies. In Bach's day, a professional keyboard player would be expected to be able to read at least five clefs, namely the treble, soprano, alto, tenor, and bass. But professional keyboard players wouldn't generally be trained as keyboard players. They were trained as musicians, to sing and to play a variety of other instruments in addition to keyboards, especially strings.

The fact that keyboard music would use any clef in those days brings to mind another point: it's not particularly remarkable these days to see piano music with two bass clefs or two treble clefs.

When I first saw Elements in Space's answer suggesting putting part of the right hand part in the bass clef, I thought it seemed reasonable, and probably the best solution. But then I saw Matt Putnam's answer showing the right hand entirely in the treble clef, and it really does look entirely normal. Using the tenor F and E on the third ledger line below the treble staff is really completely unremarkable. Steve Bennett wrote in a comment that he is "pretty comfortable reading up to 3.5 ledger lines (eg, an A above middle C in the left hand)." This is true of most pianists.

In fact, when I was learning alto clef, doing score reading exercises years ago, I would often visualize the bottom three lines of the alto staff as the first three ledger lines below the treble staff. That is, the three ledger lines were the familiar thing that I related the alto clef to in order to familiarize myself with it.

It's a pain to write music like that by hand, drawing all those ledger lines. But who prepares performance materials by hand these days? Write your working score in alto clef if you like. Do whatever's easiest for you. You can even enter it that way into the computer to reduce the likelihood of errors, and then let the computer convert it to treble clef. But in general, when choosing clefs for a performance score, it's probably best to start by putting the piano part into a normal grand staff with treble and bass clefs, without octave transposition, and then adjusting only if it's difficult to read like that.

Also note that the G-F combo has a nice property: If you draw a line between them, that is the exact same note in both cases, C4, forming a continuum.

Not that it matters for modern piano music, but if you check older renaissance scores, they could have way more than 5 lines and put several clefs on them, making said continuum explicit. This was probably a desired feature at some point.

Here is a beautiful example by Frescobaldi (source), featuring 6 lines on the upper system (G clef) and 8 lines on the lower (what seems to be 2 stacked F and C clefs). The 2 stacked clefs hint at this idea of having a continuum in which the interpreter would benefit from having multiple anchor points. 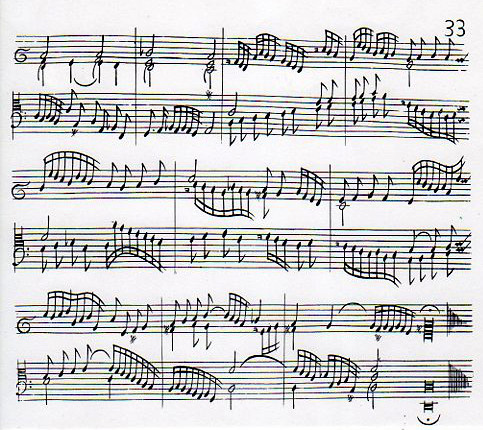 On a slightly related note, I think there was research showing that humans are only able to instantly count up to 4 items in a bundle without having to think and keep track, while many other primates retain this ability to much higher numbers. To me 8 lines look definitely confusing, but that may be lack of training.

There was a bird zoo called something like "Bird Land" or "Bird World". It used signs with the outline of a parrot on it. The standard notation for a Zoo is an outline of an elephant, so some committee wanted to change the signs.

Any standard notation is a simplification and an information loss because they use general symbols to represent specific instances, in the hope they will be understood by others. Some times the standard should be challenged: I think "Bird Land" did the right thing with their parrot signs.

In your case, it may have helped to stick the 'right hand' in the tenor clef when you wrote the thing. I used to play viola, and yet the idea of reading tenor and bass clef does my head in bigtime, which is a sign the notation is not doing its job of conveying the music in your head to me. Your music can be written in the conventional clefs, as others have shown. It still looks like 'left-hand right-hand' music either way - you are not doing a Thalberg and pretending to have more hands then you have coming out of your sleeves. Maybe the right compromise would be to use the tenor clef as a builder uses scaffolding: use it to create, but take it down when you are done.

8
How to play a piano score with three staves?

32
Beginning "adult" piano for musicians
5
Why transpose at the octave?
7
Alto clef makes so much sense; why isn't it used more often
14
Bass clef in piano scores, why?
2
Workarounds for 10th intervals or larger when arranging for piano
9
Can the treble clef be used instead of the bass clef in piano music?
4
The proper way to mark sustain pedal for MuseScore playback and live performer?
10
Why use 5 or more ledger lines below the bass clef instead of ottava bassa lines for piano sheet music?
4
How to notate a phrase than goes up and down several octaves