how do I add voices to compound species lines?

Update, TLDR: given multiple semi-written lines of music, which line should be deemed the cantus firmus before working on the counterpoint of the other lines?

Given a "free" (?) soprano line (by this I mean not of any consistent rhythmic form, such as just half notes or just whole notes, etc) and a bass line in first species (whole notes only)--I believe, relative to one another, these linear structures would be called unaligned and not parallel--how should I go about filling in the alto and tenor voices using species counterpoint? I would like for the for the lines to be "two-against-one" with the bass line (second species)? I eventually want to include suspensions (fourth species), but i'll let that go for now.

Should my point of reference be the bass line or the soprano line? Do I need to simplify/reduce the soprano line so that it is easier to see/build intervals? Essentially, I would like to know the most logical way to develop my piece give a free-flowing melody and a bass line in first species.

For reference, here is the music as is: 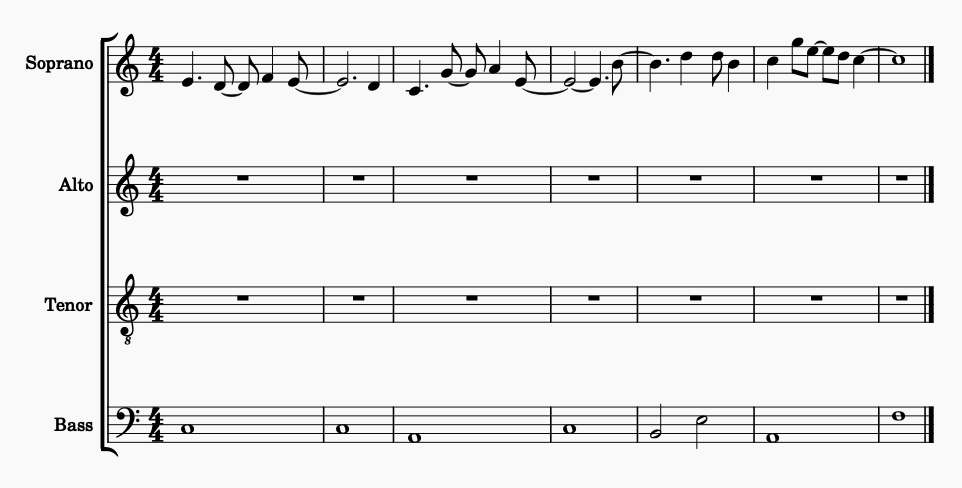 Given that you want two-against-one with the bass, it would make the most sense to use the bass as the cantus firmus. While you develop those voices, treat the soprano as a descant voice,1 which will help you keep everything in sync.

I do think it would be helpful to simplify the soprano so that notes fall (primarily) on the beat, then returning them to anticipations/suspensions once the other parts are in place.

You can have it both ways by simplifying the soprano for the purpose of interval-checking as you develop the inner parts, but then play it as written for evaluating the actual composition.

1 "Descant: an independent treble melody usually sung or played above a basic melody." (From Google search)

Not the answer you're looking for? Browse other questions tagged harmony intervals counterpoint species-counterpoint or ask your own question.