On stringed instruments, the scale length needs to be slightly adjusted (at the bridge) for each string so that the first octave happens at the 12th fret/position, the 2nd at the 24th, etc. My physical intuition tells me that larger strings need a slightly longer scale to compensate for their thickness, and this is indeed what I observe when I intonate my electric bass: the bridge saddle positions are monotonously further away from the nut as you go from smallest to largest string.

However, when I look at pictures of bridges on the internet, they often make some wacky pattern with one or two seemingly random strings longer than the others. Even "compensated" fixed saddles for acoustic guitars often have one string in the middle longer than the others. I've also heard electric guitar bridges tend to fall into a "double stairs" pattern.

So, what's going on with all that?

Edit: here are some examples: 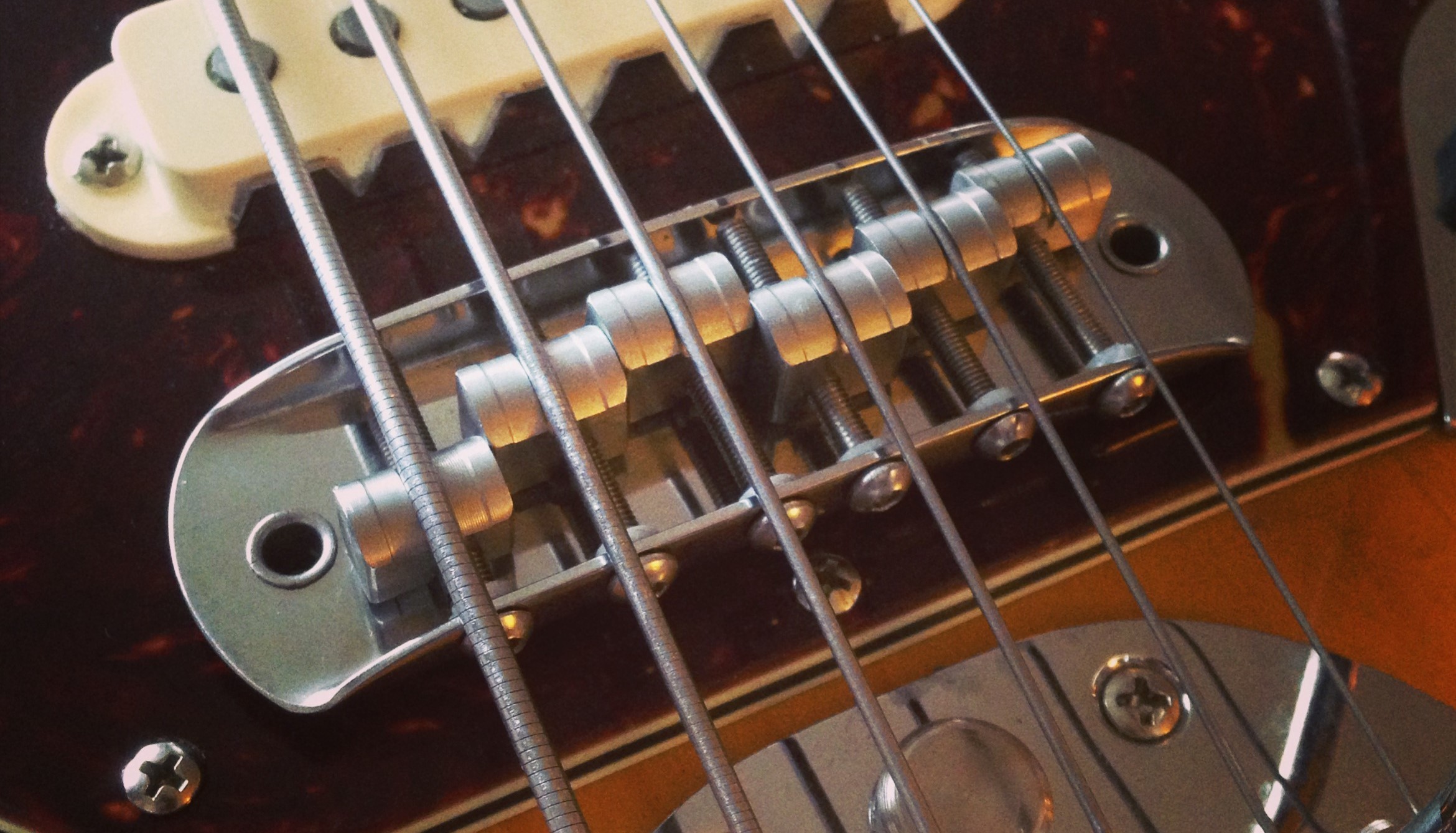 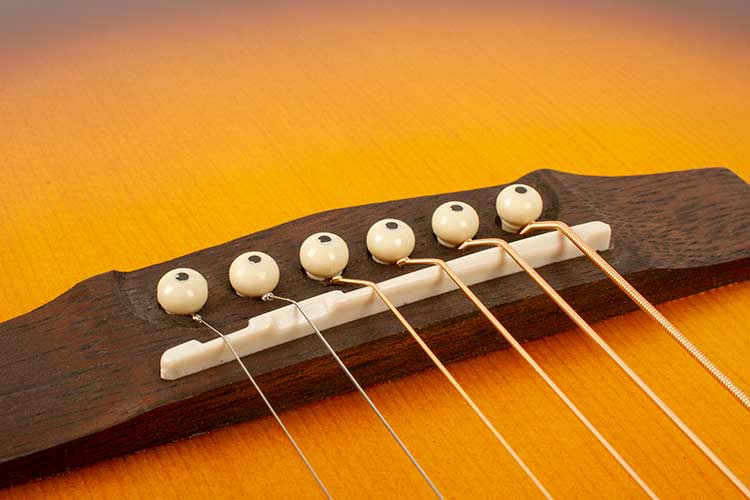 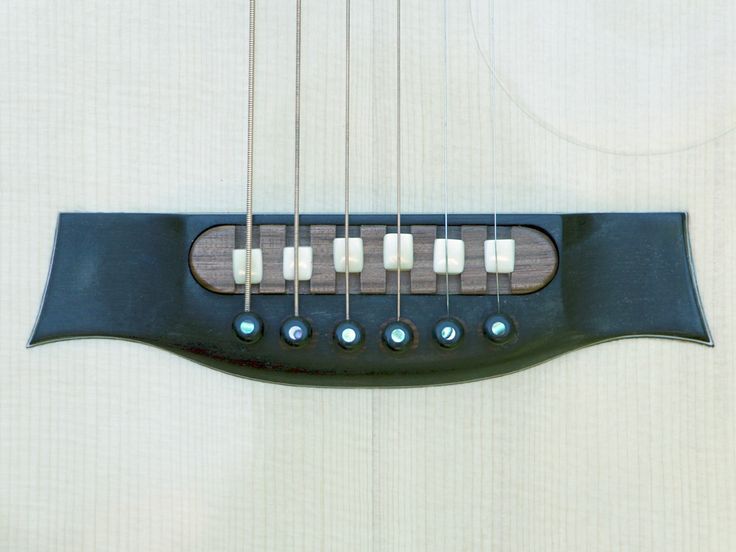 I'm actually planning to make a YouTube video about intonation to delve into this phenomenon.

The short answer is that is depends upon the cross-sectional area of the tension-bearing part of the string and also the formulation of the metal.

First, why do we have to intonate at all? One would think that we could just set the bridge at 2x the distance from the nut as the 12th fret and start the music, right? Well, it turns out that, when you fret the string, you're deflecting it to the fretboard. Imagine that you went between two power line poles and pulled the power line all the way to the ground. You took a wire which was (more or less) straight between two raised points (the nut and the bridge, for example) and forced some point in between to be displaced from that line.

That stretches the string. Now, when you stretch something, the tension in it goes up... but how much? It turns out that is determined by the Young's modulus of the material and the cross-sectional area of it. It shouldn't be difficult to understand why the area matters. Imagine how hard you'd need to pull on a piece of wire to lengthen it by 1%. Now, put two of those wires together and try to lengthen them both by 1%, and you're going to have to pull 2x as hard. 2 wires are no different (in this case) from a single wire of 2x the area. You're trying to pull 2x as many atoms away from their neighbors.

So, if you double the cross-sectional area of the string, you'll double the increase in tension when you displace the string by a certain amount. So, when you fret a string, you didn't just increase its pitch by shortening it; you also increased its pitch a little more by increasing the tension in it (no different than if you had just turned the tuning peg a little).

Now, when we intonate, we lengthen the remaining distance of the string (from that fret to the bridge) to compensate for the increase in tension from deflecting the string. So, the 12th fret is no longer at the mid-point between the nut and bridge, but it's a little closer to the nut so that leaves the 12th-fretted string length a little longer than half, to compensate for the increase in tension. The point is: the larger the tension-bearing cross-sectional area of the string, the more the pitch would increase when we fret it, and the more we're going to have to move the bridge saddle back to compensate.

Your question specifically asked about the stair-step appearance on guitar strings. That's why I was careful to mention tension-bearing cross-section of the string (since that's the part that is providing the tension). On the wound strings, you have a smaller string wound by a long coil of wire. The outer wire is just to provide more mass to get the string to vibrate at a low pitch, and it's not providing any of the tension in the string.

What you'll find, if you pull the winding off of a wound string, is that the wire inside of a light wound string (like the D string on an electric guitar) will be thinner than the heaviest solid string (like the G string). That is why the bridge positions jump forward when you transition from the solid to the wound strings. In fact, if you actually take some calipers or a micrometer to measure the diameter of the strings, you'll discover that the saddle for a wound string will be in almost the exact same position as a solid string of the same diameter as the one that's inside the windings.

As I mentioned earlier, different materials increase in tension by a different amount when you stretch them (or, they require a different amount of tension in order to stretch them a certain amount... same phenomenon). Pull on a rubber band with 1 pound of force and it'll stretch a lot. Pull on a piece of steel cable (of the same cross-section) with that same 1 pound of force, and it'll hardly stretch at all. The characteristic which describes this about a material is called "Young's modulus". Put simply, it's the amount of force, per area, that you need to stretch something by a certain fraction. You want to stretch that steel cable by 1%, you'll need a certain amount of force. Need to stretch it 2%, you'll need 2x as much force. Need to stretch a cable with 2x the area, you'll also need 2x as much force. If you make that cable out of something with a Young's modulus that 1.5x higher, you'll need 1.5x as much force, as well.

That last aspect matters to us guitarists. Guitar strings come in a variety of metallurgical formulations: stainless steel, differing amounts of nickel, maybe some bronze, etc. All of this gives a particular brand/model of string a different Young's modulus, which affects the proper position of the bridge saddle just like the cross-section of the string does. This is why I tell people, when teaching them to intonate their guitar: step #1 is deciding what brand/type of strings you plan to use for a long time (not just the gauges, but the actual brand and product name). If you change gauges, you'll need to re-intonate. Even if you get the same gauge strings from a different manufacturer (or a different formulation from the same manufacturer), you might need to re-intonate due to the Young's modulus being different in the different metal. #ErnieBallSuperSlinkysForLife

tl;dr: the saddle position depends on the action, the thickness of the string's core and its Young's modulus, because these factors govern how much the string tension goes up in fingered notes.

There's no need to compensate “for thickness” per se. This can be seen from a thought experiment: consider a “thick string” that actually consists of multiple thin strings in parallel (like in mandolin etc.). Clearly, the intonation for each of these strings will behave roughly the same way, i.e. you don't need more compensation just because you have more string-thickness.

What actually needs to be compensated for is two effects:

A real string is not quite the idealised one-dimensional object as which we like to model it in physics classes. Actually a string, even with no tuning-tension at all applied, has a certain stiffness to bending movements. The thicker the string, the more influence this has. One result of that is that the overtones on a guitar aren't exactly integer multiples of the fundamental, like you get from a synthesizer, but they get slightly sharper the higher you go in the overtone series. However, the fact that it's possible to use high flageolett harmonics in bass playing and generally stay in tune shows that this is actually not such a strong contribution.

(Note that harmonics are not influenced by the bridge compensation.) I think stiffness is largely negligible as far as bridge setup is concerned.

The string must have a certain action, i.e. height over the fretboard. That means you need to stretch it some way to finger notes. By the same effect you'd exploit when bending up tones, this stretching causes the pitch to rise, and that really is what the bridge needs to compensate.

How much the pitch goes up depends on two factors:

It's because of intonation, and it's not related to string thickness by itself but stiffness. The step you see is between thinnest wound string and thickest plain string. It is there because the core wire of the wound string is thinner and more flexible than the largest plain string.

Now according to Marsenne's law, if you tune the open string perfectly, the fretboard is enough for generating the other notes correctly. The change in bridge position rather looks like an attempt to modify the fretboard ratios.

Update: As user OJS correctly pointed out- I was ignoring the extra tension added by pressing the string on fretboard (As here we aren't doing bending techniques) but if this extra tension adds up significantly then must be the tuning should be ajdusted by changing the fretboard ratio. Especially if the action is high.

5
What is "Young's modulus", and how does it relate to guitar?