Is there a name for this simple drum pattern/fill?

I had meant to ask this question for some time. This question triggered the thought to ask.

I am a drummer of many decades. I feel I am competent, but have never bothered to learn how to read. And so, this question might be difficult to get across without using an articulate explanation:

This drum pattern is so ubiquitous in rock music, I would say it probably appears at least once on every album. To draw attention to what it is, without being able to aptly name the meter, I will point to the song Home Sweet Home by Mötley Crüe. This pattern appears immediately before the band sings the words "Home Sweet Home" in the chorus, every time I believe. Here is that video, pinned to the point where it happens (I gave you about 2 seconds of lead time).

This pattern usually appears across all forms of rock and pop alike within a simple rhythm, like a 4-4. By contrast, this pattern itself is "double-time" (sped up compared to the meter of the rest of the section). The pattern does not last but only for the duration surrounding one of the quarter notes, then the music moves on, either continuing back to the 4-4, or leading into a more complicated fill. The pattern itself is usually punctuated with a crash cymbal at the end.

Since this pattern is so ubiquitous in drumming, I was sure there had to be a name for it. If not, what is the name of the meter compared to the meter of the rest of the music?

According to this video by Stephen Taylor the fill, when going from beat 4 to beat 1, is called "the Debbie." I couldn't find anyone else using that exact term, but I did find several examples of a fill named "Pat Boone, Debbie Boone" and I think Taylor must have coined a term borrowing from that.

Something needs to be mentioned about the phrasing in the Motley Crue song. The line "home sweet home" is an anacrusis, a pickup, leading to beat 1: 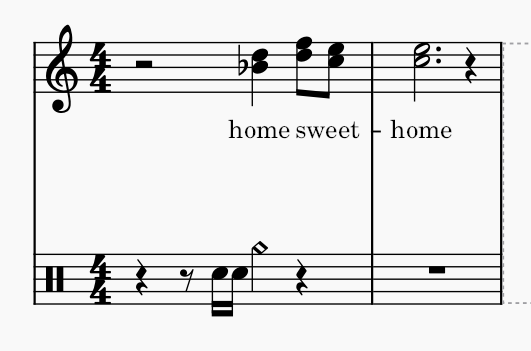 If you want to get picky about the phrasing of a fill, and expect it fills the end of a phrase, then this isn't quite a fill. It doesn't fill the ending, it precedes the beginning of the phrase.

The wording does not seem so important to me, but it does seem noteworthy that this "fill" in the middle of the bar, preceding the phrase, it just a tiny accent, while the real phrase endings are pretty loaded up with big fills, some of them filling a full measure.

I'm sure that many drummers would recognise it by sound, but I doubt they would have a name for it. It's just snare hits on the 4 & a, and a crash on the 1.

Steven Taylor calls it "a little interruption" in this video of simple drum fills.

"two semiquavers on the offbeat", I'd be surprised if a more specific name actually sees widespread use. "that snare cliche", perhaps.

26
Is there a name for this famous “memeish” rhythm?