Equivalence of intervals with octaves between them

To understand why that was the case, I read about just intonation and equal temperament.

Physically, we are generating waves that travel through the air, so to simplify things I went to a program called desmos where you can simulate waves.

I constructed an analogous situation there by first pretending that a note that has frequency equal to 2pi (the default period of a sine wave) was a note in the equal temperament system.

Next to produce a note which is a perfect 5th above that note, we must multiply the original frequency by 2^(7/12), this is equivalent to going up seven semitones, which is the definition of a perfect 5th.

Then, as the piano uses hammers which vibrate strings and then as the pressure waves add together in the air before reaching our ears, I will take the summation of the original sine wave and the second sine wave that has a frequency which is 2^(7/12) times the original waves frequency, this is what f1(x) + g1(x) represents on desmos.

Next to represent the same situation, but with both tones raised by two semitones I conduct the same experiment but with f1(2^(2/12)*x) + g1(2^(2/12)*x) (in desmos I make two new functions and give it an offset so you can see it lower down). Visually we can see that the wave generated by this sum is identical to the first, but with a scaling in the x direction.

Mathematically, we can see that the new wave just has a period which is 1/(2^2/12) times the original period. Because the period is shorter, this corresponds to a higher frequency, and pitch, so playing these two notes together should indeed have the exact same quality but just higher.

After doing this, I wondered why when voicing chords on piano we are usually allowed to move notes by octaves so that the voicing is more clear without actually changing the chord.

To do this, let's consider a similar situation to the first thing we did. Say we are playing C4 and G4, then based on what I learned, playing C4 and G5 should also produce a wave with the same quality.

Experimentally we would be comparing the wave generated by f(x) + g(x), and then f(x) + g(2x), as this represents a shifting by one octave up.

After doing that, the waves that were generated by both the above summations had totally different qualities: 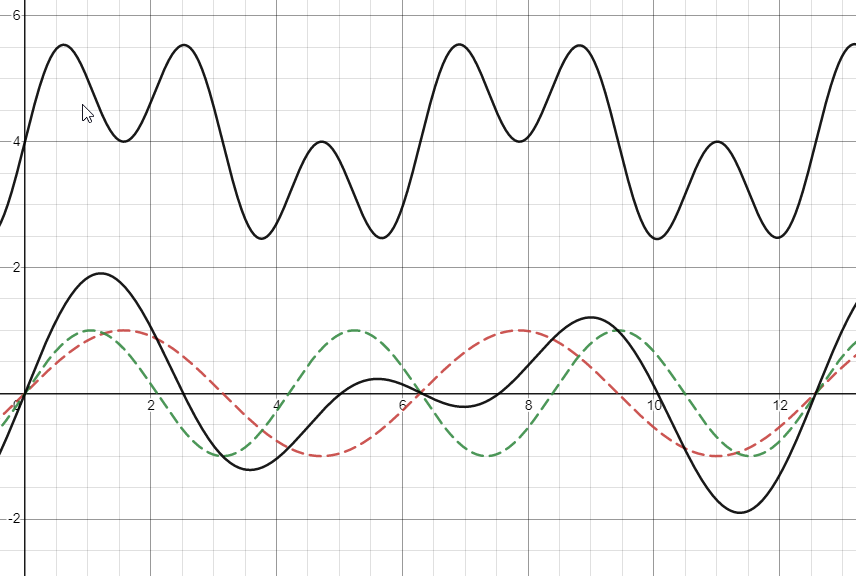 Can someone explain why C4 and G4 played simultaneously and C4 played with G5 should both have similar qualities?

I think your confusion comes from the fact that you're generating sine waves for comparison.

Sine waves are great for understanding constructive and destructive interference, but they're a pretty far cry from what a piano generates.

On any "real world" instrument the sound wave produced is composed of both the fundamental pitch and all of the overtones. It's the variation of overtone distribution (the relative intensity of each overtone in relation to the fundamental) that creates timbre.

Since the actual wave for C4 includes C5 and G5, components of the wave will line up nicely with D4 and A4 - they will differ only by the intensity of their distribution. In other words, the peaks and troughs will be in exactly the same relative positions, but the amplitudes will vary a little bit.

EDIT: some illustrations might help. Here's a perfect fifth with only fundamentals

Here's a "real world" instrument with a fundamental and three overtones

. Each overtone is 50% of the intensity of the prior one.

- the fifth in the next octave - with no overtones.

These are all still simpler than what happens with real instruments, but you can see how the peaks and troughs coincide.

The idea that you can play a note in a different octave, and it will basically be the same note and not change the harmony, is called "octave equivalence". Note that it is not called "octave equality". When people say that you can change the voicing of a chord by moving notes up or down by an octave, they are not claiming that you will get the exact same sound, only that the basic harmony won't change. (And even then, if you change which note is the bass note or the top note, i.e. if the different chord voicing is a different chord inversion, it may very well change your perception of the harmony.)

The answer about octave equivalence is essentially correct, but to take that answer a step further: the way we perceive notes is weird and doesn't accurately reflect the "underlying physical reality" of sound waves (e.g., timpani are pitched but drum kits aren't, even though toms clearly have a fundamental frequency like a timpani; and in fact, we sometimes do hear drum kits as pitched, just, only when context encourages us to); and music theory works with a set of arbitrary categorizations on top of this subjective perception. That is to say, wave diagrams won't provide any real insight into questions about interval equivalence.

The most "scientific" answer you will get to "why is a perfect 12th, harmonically, the same as a perfect 5th" is "octave equivalence"; but empiricism struggles here because:
(a) our concept of "sameness" here is arbitrarily defined, they're "the same" because, idk, it doesn't seem to affect people's enjoyment of music when we treat them as being the same, and
(b) "perfect 5th" can refer to a much wider variety of intervals than you might expect, there's no precise mathematical definition of "perfect 5th" that actually covers the wide variety of sounds considered to be "perfect 5ths" in real-world music.

Not the answer you're looking for? Browse other questions tagged theory tuning sound chord-voicings just-intonation or ask your own question.

42
Why do octaves sound equivalent?

7
Why are pure tones depicted as sine waves?
9
“Tritone” intervals in n-tone equal temperament
2
Difference between timbre and tone and frequency
2
In meantone temperaments, do A sharp and B flat have different frequencies?
4
Tritone or Minor 2nd as the most dissonant interval?
3
What word describes the sound of an instrument based on the shape of the waveform of its sound?
4
Why can't notes be tuned according to a defined frequency?
5
Can you change some composition I wrote to whatever music you want just by changing the timbre of the instruments?
0
How to calculate the extra semitone in one circle of fifths