What gives a Chinese Pipa its unique timbre in comparison with a guitar?

Similar to this broader question How do East Asian instruments (Shamisen, pipa, etc.) get their unique sound?

Though they a similar in many ways a guitar and a pipa sound very different. Could you explain what gives a pipa its unique character in costrast to a guitar or in terms a guitarist could relate to?

I have some hints from some youtube videos e.g.

It looks to me like some of the key differences are:

Is this anywhere near close?

From the last youtube like it would appear that there are no limitations for that pipa master that require a different instrument to get a particular sound.

Perhaps a pipa sound on a guitar is possible too or maybe it is out of reach due to how a guitar is constructed.

For each instrument there are sounds that are easy to make. There are also sounds that are more difficult to make and some that may be impossible. Maybe the differences are less than I think and the music and playing style are more important.

For example a key difference between a guitar and a sitar is that the bridge on a guitar keeps the strings in place where they are free to move on a sitar. The guitar aims to eliminate the buzz and the sitar aims to utilize it (this is simplifying and ignoring sympathetic strings etc. - if you have a better description please consider adding a similar quesiton and answer pair). This is just an an example. I really want to know about the Pipa.

#Edited to describe the "unusual" design of sitar bridges. Thanks to user1079505 for providing this information.

To respond to one point: "buzzing" on a sitar is related to a special feature of the bridge design. While, as with guitars, the bridge does force a node, i.e. endpoints where the amplitude is forced to zero, the structure includes a broad "landing" designed to be in contact with the string. This is what produces the buzz as the moving string rubs against this landing. Here's a side view from the wikipedia page, 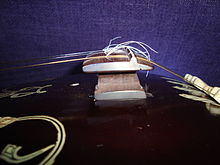 A bridge is a simple way to hold the strings off the fingerboard and/or body of the instrument; it turns out that there's some resonance effect on the string lengths between bridge and the final "tie-down" point (more so on orchestral bowed instruments where that length is significant).

As you can hear - the "pi" and "pa" strokes produce the same timbre. You can 'bend' the same way on a guitar as shown in the pipa video. Notice, BTW, that the pipa range is rather higher than a standard guitar, so you don't get any of the lower frequencies involved at all.

The significant sound differences, (granted, in my view) derive from: 0)(added in edit) the contact area of the bridge

Your question invokes more than one response. On the one hand you are asking about timbre in general and on the other hand the pipa specifically, then trow in the sitar as an example. My response will focus on the general features of any musical instrument that contribute to its tone.

Most (not all) instruments use one (or more) of the following vibrating components to generate a note; tight string, stiff rod, tight membrane, resonant air column.

An instrument like the guitar, or any stringed instrument, will have a collection of these components each tuned to a specific fundamental note, e.g. E, A, D, G, B, e for the classic 6 string guitar. The fundamental tone is determined by the tension in the string, the string's length, and other properties like density or gauge etc. These are not all independent variables, for example a long string can be tightened to produce the same tone as a short string. In addition to the "fundamental tone" which is the note you want to hear, each of these vibrating components is capable of supporting a theoretically infinite sequence of harmonics or overtones. The specific values of these higher vibrational frequencies is dependent on the physics of the component as well as the boundary conditions (how the component is mounted to the instrument and held in place). Harmonics in the typical sense are related to the fundamental by a simple relation, fn = n*f1, f1 = fundamental, fn is the nth harmonic, and n = 1, 2, 3, 4, ... to infinity. However, not all vibrating system follow this sequence! And people often do not know this. The tight string and resonant air column come very close to meeting this ideal relationship. More to the point, instrument makers will adjust the instrument design to come as close to this sequence as possible.

If all instruments used similar vibrating components, and the bodies served only to amplify those frequencies then how does one instrument sound different form another?

A good deal of this has to do with how the vibrations are set in motion, the attack. In the case of a string the vibrations can be initiated by plucking, bowing, or hammering (perhaps there are others I've missed). This is where all the harmonics come into play. Each harmonic, including the fundamental tone, represents a mathematically pure sine wave, or a fundamental solution to the wave equation (for stiff rods the solution is not a pure sine wave). When a string is set in motion the abrupt initiation of the vibration, and the initial shape and velocity profile, cause many harmonics to be generated at once. A plucked guitar string might have as many as 5 or more audible harmonics. All these extra notes are not perceived by the human ear and brain as a complex chord, but rather as "tone", also equated with the term timbre. The harmonic content alone is not enough to distinguish one instrument from another. Just as important is the time evolution of the sound. Damping will cause higher harmonics to decay faster than the lower harmonics, causing the overall tone to change in time. There are three basic sections of the time dependent waveform called; attack, sustain, and decay. A bowed violin string is always being pumped with energy by the bow. So its otherwise decaying harmonics are being sustained. In a plucked instrument once the pluck is finished the tone changes rapidly in time.

The quality and style of construction as well as materials will affect the overall sound generated by the instrument. This can be experienced in one family of instrument by playing similar instruments made by different luthiers side by side. Not all guitar are the same, even though they all start form the same basic template.

The unique "timbre" of an instrument is a combination of all these factors, including the player! In fact, given a guitar and a pipa I would say that by adjusting the attack a skilled player could make one sound like the other, at least for some subset of the instrument's function. Beginning guitarists often focus on the string, fretting, and plucking the correct note at the correct time. But you are not playing the string, you are playing the body and the string is just an input device for the body (assuming an acoustic guitar).

As for your statement "The guitar aims to eliminate the buzz and the sitar aims to utilize it"? I'm not sure what you are trying to imply. A guitarist can make the guitar "buzz". The guitar does not really aim at anything. Each of these instruments evolved in different parts of the world, in different cultures, and influenced by different tastes. It might interest you to know that the Flamenco culture in Spain is influenced, in part, by Gypsy culture which is Indian. So sitar is a sound sometimes emulated by guitarists. There are techniques to mimic this.

The other answers seem to deal more with theory. More practically, I can say that, having once owned a pipa, the main sources of the difference in timbre (even when the instrument was played by a guitarist with no pipa background) were:

Not the answer you're looking for? Browse other questions tagged guitar string-instruments pipa or ask your own question.

6
Is it possible to get a mandolin style tremolo on an acoustic guitar?
0
How do East Asian instruments (Shamisen, pipa, etc.) get their unique sound?