How to smoothly re-establish original tonality?

This is what the chords are without any modulation/transition between the two tonalities:

I understand that the simplest means of firmly establishing a tonality is the cadence.

The strongest cadences are those in which the dominant precedes the tonic triad. The thing is, coming out of the Eb F Bb F progression (in B-flat remember), the B natural is jarring/disruptive. So, in the notes pictured below you'll see that I tried to make the move to V of C more natural by having a D minor chord precede it (I would use a secondary dominant, D7, but I don't want it to sound too contrived/academic/obvious. That is to say I want it to sound effortless.) IV-ii-V-I looks to me to be a very normal progression in C major (subdominant -> dominant -> tonic), so I went with that.

Cadences with the subdominant preceding the tonic are less decisive. I still wanted to try it, though, so you'll see that I just threw the C major immediately after the F major. I feel as though it sounds okay but not particularly satisfying (it sounds like we run into the new (original) tonality by accident).

If I'm not mistaken, the F major chord in both examples serves as the pivot chord, because of its placement and the fact that it is common to both the original tonality (C major) and the new tonality (Bb major)

The issue of timing is another concern of mine--does the modulation need its own section? Or should I make the bridge long enough to encompass the modulation within the given length? In the actual composition, the section would likely be 16 bars or so. 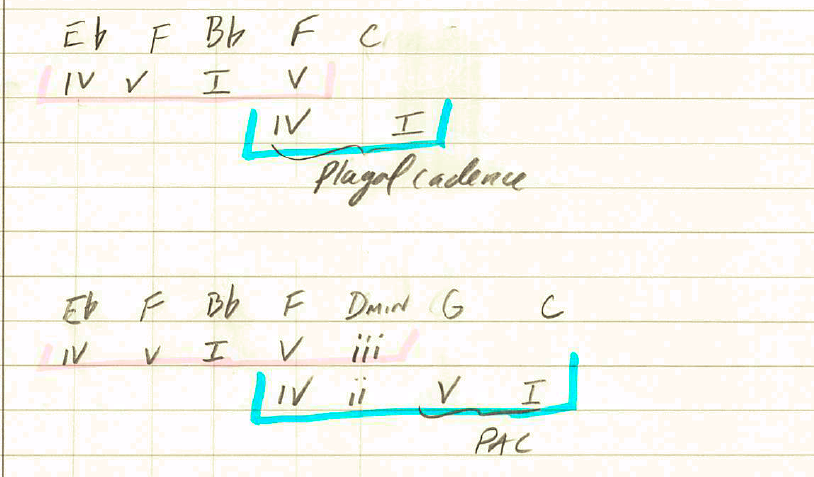 harmony chord-progressions modulation
Share
Improve this question
edited May 28, 2021 at 12:25

I don't like the plagal cadence. That to me looks very strongly like a IV-I-V in F, and I'd really be expecting another F chord next.

Your second series looks very nice to me. You have a nice collection of shared chords, and the G major really kicks it away from B♭ or F keys.

Rather than saying "this is the answer" like I did in my previous answer, I'd like to point out a couple things:

There are lots of ways to pull off a Bb to C modulation. Much depends on how many measures you want to take and what sound to get. The usual suspects are the direct move: just go Bb then C; this works well for a big change; it's also popular with country or pop music.

Another more roundabout is to move to the relative of Bb, Bb->gm then, gm-G (or gm-G7) then proceed to C.

Also, you could pivot on the note D as the third of Bb and root of dm giving Bb6-dm6-G7-C.

Extending things is possible (around the Circle of Fifths and the Montgomery Ward pattern): Bb-Eb-Ab-fm-D7-G7-C. The Ab could be entered as the subdominant of Eb and left as an Augmented Sixth: Bb-Eb-Ab7-C64-G-C.

Not the answer you're looking for? Browse other questions tagged harmony chord-progressions modulation or ask your own question.

3
Does this modulation make sense?

9
modulating by a tritone
2
Explaining the harmony of Wagner's Wanderer motif
5
Use of the VI and v chord in a minor key, subdominant and dominant functional use?
9
Is parallel modulation a thing?
3
Modulation from D major to D minor, should I go sudden or gradual?
3
Chromatic Mediant modulation: Can I use an omnibus progression for this?
1
Can we understand subdominant/dominant chord functions in terms of them being tonics of other keys?
3
Does this modulation make sense?
6
Can you tonicize to a chord that's not on the original key?