What is the function of the black strip below the fretboard on the lower horn? Some basses have it, some don't

electric-bass-guitar equipment
Share
Improve this question
edited May 29 at 15:44

On older Fenders, it's below the strings, later ones it's above, then it disappeared entirely.

It's a finger/thumb rest. 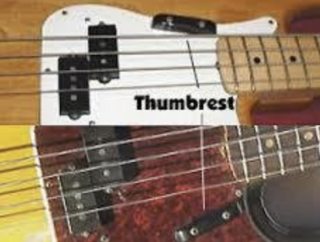 Back in the 50s/60s you'd rest your fingers there & actually play with your thumb. I've never tried it, it's just too weird for me, though I used to own a Jazz bass old enough for it to be placed there.

Later it became more fashionable to play with your fingers, so it was moved to above the strings as a thumb rest.

As styles changed - more people used picks, others realised you could just as easily rest on the pickups or the edge of the scratch-plate, it just went out of fashion & many basses no longer have one at all.

Similar happened with the pick-up guards - or 'ash trays', as I used to call them. They were there to protect from stray interference, hum etc, but as people moved away from that early fixed-position playing style, they increasingly were just in the way. To start with, people would take them off themselves - considerably easier on a Fender than a Rickenbacker; a couple of screws, vs take the strings off & the entire pickup out. I eventually lost my 70's Rikki ash-tray after a house move, but it was one of the first things I did when I bought it, new.

I found someone did a blog page just filled with images of different rests, factory & custom - https://goleilamccoy693.blogspot.com/2018/03/fender-p-bass-thumb-rest.html

Top picture is a thumb rest, bottom picture is a "pull bar". You rest your fingers there and play with your thumb. If you want to see the style of play that uses a pull bar, the first guy that comes to mind that always used that style is Brian Wilson. Check out some YouTube videos of early beach boys and you'll see it.

The Precision bass was called Precision due to the frets being precise on the notes. It was intended only to amplify the "sound" of an upright, using the thumb contributed to that sound; hence the bottom finger rest. Leo knew 'precisely' what he was doing. 😁

Not the answer you're looking for? Browse other questions tagged electric-bass-guitar equipment or ask your own question.

5
What is the purpose of this (?) rubber band?
1
What is the purpose of this piece of wood between the pickups?
10
How can an electric bass/guitar without pick ups work?
4
Electric bass scale length and pickup angle
4
What is a "horn" on a bass guitar?
5
Is it common for a 5 string bass to have a high B?
1
Why are notes always written in all-caps instead of C..B and then c..b for the next octave (E-Bass)
1
What are these three switches on the circuit board of my active bass?
8
What is the "Jazz Bass Mid Scoop"?