Notation - when to use staccato vs rests

I'm arranging a piece of music I wrote for string quartet, and I'm not sure what the most practical way of notating the following rhythm is. I'm self taught and rarely use written music, so I'm not sure how a classically trained musician would interpret these. This happens to be in 6/8, but there could be examples in any other time signature

Which is easier to read? The tiny dots seem easy to miss to me

Do they sound any different, assuming there's no other context for the musician?

I endorse Aaron's and Richard's answers, regarding what staccato means conceptually.

This answer is mostly to provide some examples and details as to how staccato will typically come out in the case of a string quartet (or, strings in general).

As I already commented, I strongly disagree with the people saying a staccato note should “in theory” be the same as a normal note of half the length.

“A normal note of half the length” is a model for staccato, but especially in bowed strings it's actually quite far from the reality of how players will render it.

Only on some instruments (notably piano, which unfortunately dominates many a music teacher's mindset although it is in these regards completely different from most other instruments) is each note characterised almost exclusively by pitch, dynamic level and length. In general however, and very much practically relevant in string instruments, the note may be shaped in multiple parameters over its entire length. A first approximation is to look at only the time-varying intensity.

Piano is limited to a constant (roughly exponential) decay, and playing a note half as long means simply you stop it† earlier: 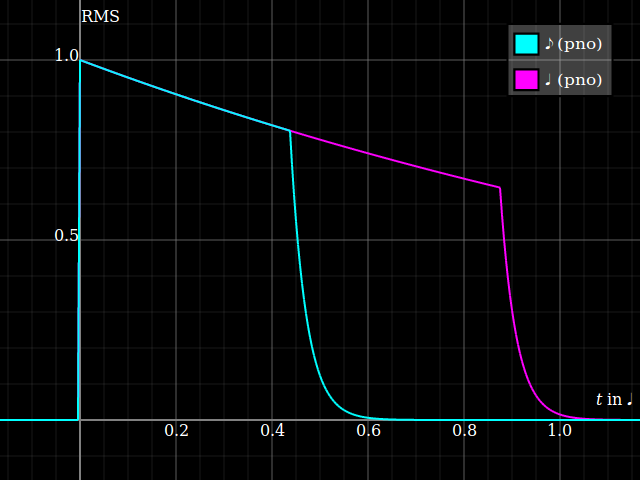 It may then well be that a staccato crotchet 𝅘𝅥 𝅼 has exactly the same envelope as such a quaver 𝅘𝅥𝅮   on piano.

But even for such normal notes without any particular articulation, it's more complicated on string instruments! The bow doesn't bring the string (near-) immediately to full swing as a piano hammer does, but rather makes it “fade in” somewhat, depending on bow pressure and -speed. For long notes a slow attack is perfectly fine or even desired to get a smooth stringly sound, but in faster notes a player will adjust the pressure so the note is clear enough even in the short duration. Also, unlike piano the note doesn't decay by itself – but unless the passage is explicitly in legato, the player will fade it out some time before the actual end. Like, 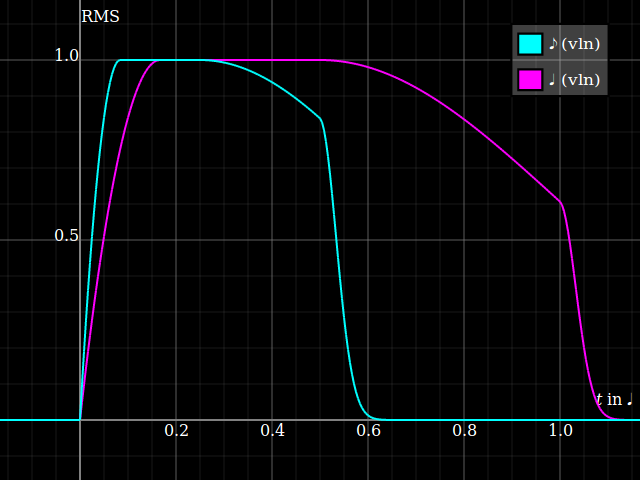 The exact shape will of course vary between players and depending on the genre, but at any rate it should still be pretty clear when the note is really supposed to be finished.

Conversely, a staccato note will actually begin decaying almost immediately. It will typically also have a much quicker attack (achieved by “locking” and or “throwing” the bow hair into the string right before the note, so it's almost like a plucked or hammered tone), which alone will make it seem more detached from what happened before. This is actually not so much about loudness-curve, but tone character: any staccato note on strings will have more of a scratchy / clicky sound at the start, which string players would otherwise seek to avoid. Similar things can be said for wind instruments, where the start of the note will be articulated to different degrees with the tongue.

But what a staccato note won't have is a dedicated cutoff right in the middle of the note length. 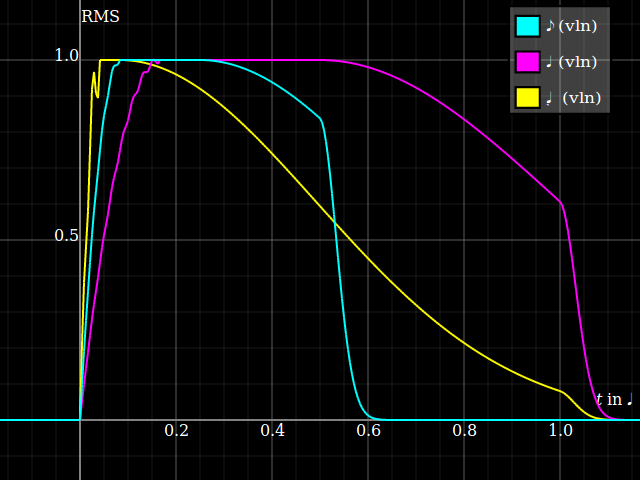 Applied to your example, it would mean you should expect each version to come out roughly like this: 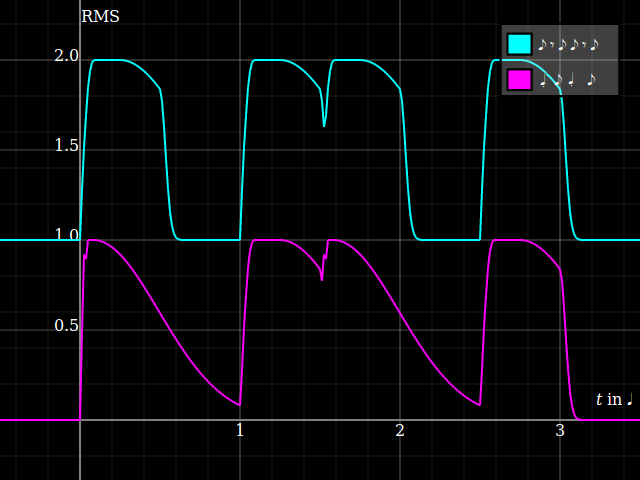 In fact, players might even end up playing the off-beat quavers slightly different when they're contrasted with staccato crotchets, than when all notes are quavers. But this really is hard to predict, how exactly it would come out.

†It's worth mentioning that even on piano, the note end is not a completely sharp cutoff like you might get with a synthesizer with the release parameter set to zero: the dampers do stop the note quickly, but not instantaneously, and releasing the key slowly will actually also stop the note more gently. I bet for this reason, the difference I'm talking about between 𝅘𝅥 𝅼 and 𝅘𝅥𝅮𝅘𝅥𝅮   can even be found in most pianists' playing, though the effect won't be as strong as on strings.

The core difference is that eighth notes/rests and quarter notes/rests (etc.) are durations; whereas, staccato marks are articulations. While it's true that staccato affects the duration of the note, there is an important interpretive meaning either way.

The version including notes and rests is giving a precise indication of how long each note and rest should last.

The staccato version is saying you want a sharp/detached sound to the marked notes, but the total time allotted is as marked. That is, the actual sound may not last that long, but the performer should still allow that amount of time.

The duration of a staccato is itself open to some interpretation as well. At a fast tempo, there's not much room for variation, and both notations in the OP may wind up sounding the same. But at a tempo where there's enough room between beats, a performer might choose a "sharper" or "duller" staccato depending on the nature of the music.

Another difference between the notations is that a rest is a "demand" for silence; a staccato mark "allows for" silence. A rest is a positive instruction to place silence; a staccato recognizes silence as a (possible) side effect. ("Possible", because instrument resonance could "bleed" into to otherwise silent time. In fact, were you to combine notations — staccato eighth note plus eighth rest — that would signal to the performer that they should explicitly stop the sound, cutting off any resonance.)

Summary: If the exact duration of the sound is important, use the notes/rests version; if a detached, "skipping" sound is intended, use the staccato version.

In terms of which is easier to read: neither will give any trouble to someone who reads music.

I'll chime in as a violinist. Keep in mind that notation is partly about psychologically manipulating the musicians to produce the effect that you have in mind.

I only have a half answer, but I think there's an important thing to clarify: the literal definition of staccato.

It's a past-tense form of the Italian staccare, meaning "to detach." While it's true that some musicians (especially those in competitive ensembles like a marching band) have determined particular proportions inherent in a marking like this, that's an exceedingly narrow (and dare I say unmusical) view of this marking. There is an infinitely large spectrum of what staccato can mean, and I've even heard some interpretations (at very slow tempos) where the articulation isn't even applied to the note marked staccato, but rather to the note (or notes) on either end of it. In other words, I've heard notes marked staccato that actually last their full duration; it's the notes on either side that don't receive their full value so that they are detached from the actual staccato pitch.

All of this to say that your first notation allows for much less interpretation on the part of the performer, so it's up to you what you want: do you want it to sound more or less the same each time, or do you want to give your performers more room for interpretation? If the latter, I'd recommend the second notation.

In theory (that's where we are!) they should basically sound the same. Reason - a staccato dot means the note sounds for half its length, followed by not being played for the other half.

The first example is probably easier for beginners to read - they see exactly what to play - and what not to play.

The second would be absolutely fine for musos, used to that sort of thing.

I imagine anyone playing either would make any subtle changes in the timing that would be appropriate (or not) for the style - the rests are meant to be exact, whilst the staccato marks can be open to interpretation, so in the end, it's down to the writer. Do they want exact, or do they expect a good player to play it possibly more musically, given the situation. Contrary to another idea, staccato doesn't mean that note gets played any louder, or with more attack, although on some instruments and in some music, this may happen as a matter of course, or even because the player interprets it as such.

Not the answer you're looking for? Browse other questions tagged notation sight-reading articulation performance-practice interpretation or ask your own question.

2
Staccato crotchet or quaver and rest, or staccato quaver and rest
11
What is the technical term for gap between notes
3
Why are there many types of staccato?

17
How long is Staccato?
10
Duration of staccato
3
Unplayed 2nd voice in notation - spaces or rests
13
Articulation between staccato and full note length?
3
When to use note beaming over/under rests?
5
When to use 8va in musical notation?
15
Mystery bowing notation
2
Bass Guitar Nomenclature for Intermediate Players