how to deal with registration bank changes without interrupting the flow of the music? [closed]

Ask Question
Asked 7 months ago
Active 7 months ago
Viewed 152 times
1
Closed. This question needs to be more focused. It is not currently accepting answers.

I have been practicing keyboard for a year now and I can play scales, Chords and some songs nicely with right hand, with left hand I play with a 50% speed as that of right hand.

I am trying to practice hand coordination by using 2 ways

A: Chord progressions in left hand while right hand plays something like scale or melody

B: Playing scales in contrary motion.

But When it is comes to making both hands coordinate while in a song, I am finding it difficult. Additionally, while playing the songs, The inevitable action of changing/interacting with voices/styles through registration banks in keyboard also causes trouble in staying on beat and in hand coordination. Due to this action, there is a delay introduced in the song or causes to miss a beat if I change in parallel, which I feel is not OK.

I have come across many sites, YouTube videos, courses, people who suggest different hand coordination exercises and exercises making your fingers fast, left hand stronger. I am wondering "how will these exercises build the hand coordination ability in me for every song that comes my way" Technically, how do those skills get applied to various songs? OR is it that for every song that I would be selecting, I will have to always go through the process of hands separate and then hand together.

The later part I don't want to believe because I have seen some of my tutors/experienced friends directly get on a song the first time and come out with the song played perfectly with great coordinated hands (including correctly interacting with the keyboard registration banks in parallel); I always wonder how they got to this point!

Are there any exercises out there which when practiced will help me build hand coordination ability to such an extent?

Are there any such exercises that gradually build/develop that ability in your hands to coordinate hands perfectly on RHYTHM (I miss the beat many times), that develop ability in your hands and fingers to play fast, jump across multiple keys, to play chords and melodies very very smoothly? If yes, I would like to have those included in my daily practice routine.

Should I be practicing those exercises life long? Can someone please please point me to any such site or course or a tutor who can give me that?

What is the process/way of interacting with keyboard registration banks while the hands are focused on coordinating with each other? Any good help is really appreciated

First thought: you have been at this only one year. That isn't a long time. Especially if your practice hasn't been effectively focused on rhythm and hand/finger independence, it won't just come spontaneously.

Second thought: think about the difference between composite rhythm and true hand independence. Composite rhythm is the rhythm produced by the two hands sort of "added" together... 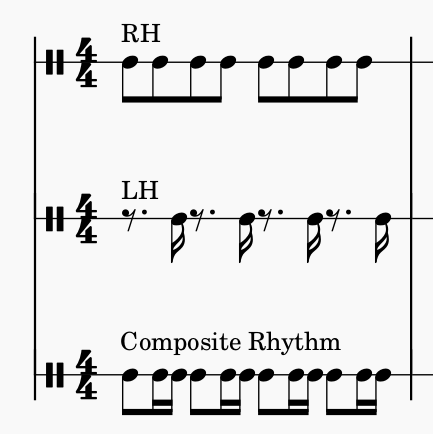 ...you can often work out two-hand coordination issues by finding the composite rhythm and thinking how it's distributed between the two hands. If you were to try playing just the LH rhythm alone - a dotted eight rest and a off beat sixteeth noe - it would be difficult to get the timing right. But when you see the composite rhythm is a simple eighth plus two sixteenths, and the sixteenths alternate between RH and LH, sort of like how a drum roll would alternate hands, then it's easy to coordinate the two hands.

But, consider that working with a composite rhythm means the two hands rely on each other. In this sense the hands are not independent, and you are not doing two separate things. What we really want is an approach that involves two truly independent actions.

One way to do it is work with contrapuntal material, music that works with two separate, but equally important melodies. There is a collection of music in this style just for the beginner. Kunz, 200 Short two-part canons. All the exercises are in five-finger position so there are no fingering difficulties and all the focus can go into the rhythm, and especially the hand independence. The pieces are all canons, where the two hands play the same melody, but out of sync by a few beats, so you can really focus on how each hand plays the same melody, but not at the same time. When performed well, it's a kind of echo effect, both hands will have an unbroken flow, neither hand subordinated or neglected. Also, contrapuntal music like this is a good time to work on hands separately and then together, because both hands must play the same melody.

There is another thing that you can do that's deceptively simple, but I think very effective: play the two hands with different articulation and dynamics. Play one hand legato and the other hand staccato. Try simple ideas that don't involve too many position changes. Treating one hand as accompaniment for the other will help. You don't even need to worry about harmony, just elaborate a single chord. Something like this...

The important thing is to really contrast the two separate expressions - legato and quiet versus staccato and loud. The independence is less technical and more mental. Instead of trying to play scales in contrary motion (really a fingering matter) or coordinate two-part rhythm (a composite rhythm matter) this will practice splitting your conscious between two expressive modes. When it's really working this example should start to feel like the LH accompaniment is on "auto-pilot" and soft, while the RH plays a simple tune. You want to guard against the hands effect each other. You don't want, for example, the staccato playing of the RH to cause the LH to start playing notes short. Concentrate on the two parts playing purely. Despite the rhythms being very similar, all eighth notes, you should feel the sense of two independent streams created by the differing expressive articulations. 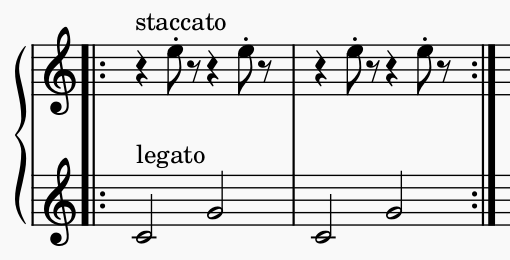 And of course two things to remember with just about any exercise:

The problem of manipulating keyboard controls like registration banks while playing is similar to the problem of turning pages — both seemingly require a third arm.

@Tim's suggestion of a foot pedal provides for the greatest ease, since, obviously, one's hands needn't disengage from the keyboard. Multiple keyboards are also a common way to mitigate the problem: each keyboard can be pre-set as needed, requiring only a shift from one instrument to another without interruption for button pushing.

However, where manual manipulation is required, it's less a matter of hand coordination exercise and more a matter of studying the music to determine the most opportune moments to remove and replace one's hands on the keyboard. Once this matter of timing is determined, then it's a matter of practicing to engrain the movements involved.

As a brief digression, take a look at the answers given in Quickly flip a page of sheet music while playing regarding page-turning strategy. It shows the lengths to which keyboard musicians will go in order to turn pages efficiently. The techniques described aren't directly relevant here, but they might inspire some creative thinking.

Exercises are somewhat worthless. There is proper movement and improper movement. If you move improperly you will have fatigue, tension, strain, uneven playing, missed notes, etcetera. You can brow beat "strength and endurance" into improper playing but that will lead to injury in twenty or so years.

Proper movement obeys the laws of physics and ergonomics and makes playing effortless, coordinate and fast. However, if you have just one improper moment, it can be that proverbial monkey wrench in your progress. You may ascend to a certain level and no further. Depending how much you play, injury could be inevitable.

The best thing to do is to find a teacher who knows what they are doing, one who knows anatomy, physics and ergonomics, not just dots.

With a little imagination, one should be capable of coming up with exercises. Play scales two notes in one hand to one in the other, three notes, etc. Playing just scales, where both hands are together - even contrary - won't improve coordination beyond playing both hands in octaves at the same time.

Play arpeggios with one hand, single notes or chords with the other.

As far as changing registers, some 'boards have foot controls, I use MIDI pedals with mine to change - left foot has little else to do!

Recommendations are out of bounds on this site, so don't expect many. Just get inventive!

Not the answer you're looking for? Browse other questions tagged piano practice keyboard learning-resources hand-independence or ask your own question.

74
Quickly flip a page of sheet music while playing

83
How can I significantly improve my hand independence on piano?
1
Left hand training for right handed guitar players - to improve coordination.
1
Piano practise: hand independence for beginners
2
Developing Hand independence and Finger independence
5
Piano: How to learn this boogie pattern?
1
While playing a song / melody, Why does my timing of hitting the chords go wrong?
2
How to Develop Muscle Memory on the Piano: The Entertainer
3
Learning to interact with an audience