What are semi-acoustic guitars?

What are semi-acoustic guitars in general? I have a couple specific questions about them as well:

Semi acoustic and electric acoustic guitar are hollow (not solid) body guitars with a mic inbuilt. It can be a condenser microphone or a piezo-electric under-saddle pickup. Some have both and you can adjust where the sound comes from.

The point with semi acoustic guitars/electric acoustic guitars is that they are very practical on live situations when you need to amplify your instrument and have fold-back monitors to give sound back to the musicians. This often causes a problem, when the sound from the fold-back monitors gets into the instruments mic it gets amplified and comes out even stronger which goes into into a "feedback loop."

If you had a "normal" mic on a stand you would be more static and would have higher risk for "feedback." With this kind of guitar, by using the pickup you can connect a cable and move more free, AND you don't have risk of "feedback." This is very good on amplified concerts as said.

The sound quality is sometimes a compromise. The pickup sound is not the same as the acoustic sound of the guitar, so here the EQ can be very useful.

This works to connect to GarageBand, and here is another advantage: you can be recording with a drum-set in the same room and the leak into your channel will be nothing or very very low, so you get a clean channel with just guitar.

There is some confusion here between semi-acoustic guitars and electric acoustic guitars. It's compounded by the fact that the guitar linked in the question has been mislabelled by the shopping site - they are evidently not specialists in music.

I think we all know what an acoustic guitar is - a guitar made of thin wooden sheets, surrounding a large hollow, with a sound hole usually below the strings. Acoustic guitars are loud enough to play to small audiences unamplified.

An electric-acoustic guitar (sometimes called electro-acoustic, or acoustic-electric) is an acoustic guitar with a socket built-in, allowing it to be plugged into an amplifier. The sound of the guitar is converted to an electrical signal, usually by a transducer (similar to a microphone) attached to the bridge or the underside of the soundboard.

It has the advantage that it can be played effectively either unplugged or amplified.

Electric acoustic guitars generally look exactly like acoustic guitars, except for the socket for the guitar lead, and sometimes an EQ control. Some models, like the one pictured here, have a cutaway so that you can reach higher up the fretboard. 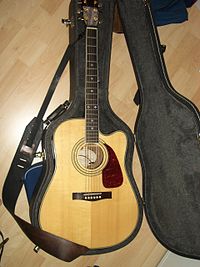 The amplified sound from an electric-acoustic guitar has some elements in common with the unamplified version, but it can be thought of as having a character of its own. When recording, it's not an exact replacement for recording an acoustic guitar with a microphone.

An acoustic guitar can be converted into an electric acoustic in various ways, some temporary, some permanent.

You can certainly use an electric-acoustic guitar with GarageBand and similar programs.

A semi-acoustic guitar (also known as a hollow-body electric) is an electric guitar in which some part of the body is hollow. 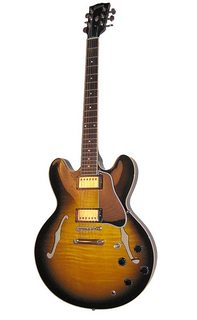 Sound holes tend to be f-holes, or similar, on either side of the strings, rather than a round hole beneath the strings.

Semi-acoustics are generally about as deep as a solid-body electric guitar; or about half the depth of an acoustic guitar. Sometimes they are hollow throughout; sometimes they just have a couple of cavities on either side of a solid piece that passes through the length of the guitar.

Semi-acoustics have long been associated with jazz, for warm tones when played through a clean channel. More recently, rock acts have adopted semi-acoustics for their tendency to feedback when distorted, and (more likely) because they look cool.

EQ is simply the ability to adjust the frequency response of your guitar - to make it more trebly, more bassy, or balanced. It can be nice to adjust your tone while playing -- for example, bring your treble up for a solo, then back down as you return to rhythm playing. However, it's not all that important; you can make similar adjustments at the amp, or in a pedal.

I tend to think that electric-acoustic guitars often have an EQ control because the battery compartment for the transducer creates a conspicuous plastic surface, which the EQ controls can occupy.

In addition to Slim's excellent answer, I would mention that there is another kind of guitar referred to as a "semi-acoustic". This is a guitar that is designed to sound just like an acoustic guitar, but only through amplification. It is a guitar that is small and thin, proportioned like a solid body electric guitar, but which has a top that is built and braced like a conventional acoustic guitar. However, this kind of semi-acoustic guitar has little or no resonating chamber, so when it is played unplugged, it puts out almost no sound. It features a piezoelectric bridge pickup affixed to a traditional acoustic guitar bridge, and it may also incorporate an internal microphone or other contact pickup design as well.

Guitars of this design were created for use onstage by performers in loud bands who would have difficulty using a conventional acoustic guitar because of feedback or microphone leakage problems. However, they also provide a design that is smaller and more portable, and perhaps more durable than a conventional acoustic guitar, and which is easy to use with a PA system because it is designed not to be used with an external microphone. 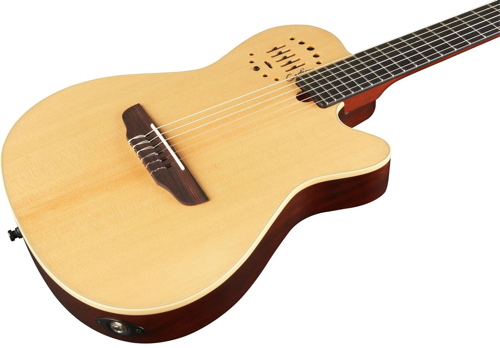 Semi acoustic guitars, while of the variety mentioned in the first post, can also being carved top electric guitars that have a solid post that anchors the middle of the acoustic chamber, which is a hollowed out area to either side of the post. Such guitars as the Gibson 335 are famous examples of semi-acoustic guitars that, while primarily played into amplification, are also known for a less brittle sound signature than totally solid body guitars.

The guitar you are looking at uses "onboard" EQ-ing. This is short for equalization and is a method of overcoming some of the shortcomings of taking an instrument--the acoustic guitar--that was originally meant to be played in small, salon-like setting and amplifying it to reach large audiences. The EQ acts like a filter to notch certain frequencies likely to cause feedback and leave surrounding frequencies alone, thereby giving you most of the tonal characteristics of a true acoustic at much higher volumes.

In my experience as a pro solo guitarist (I play an amplified Cordoba flamenco guitar) the sound you get with a pick-up and EQ in a live situation is far superior to most mic set-ups, unless you have great mics, great sound reinforcement and the ability to mix them live. I much prefer a good pickup (I use Fishman) mixed with the interior mic on my guitar to a mic on a stand.

Slim has provided the most accurate answer. A semi acoustic guitar, as mentioned by Gibson on their website when describing their 335 series guitars, is also known as a hollow body - a hollow guitar that would require amplification to be played any louder than practise volume. It is louder than an electric, but only because of the hollow body, made of laminated or thin solid wood.

In summary, acoustic type instruments, or those bearing the title 'acoustic' are

Not the answer you're looking for? Browse other questions tagged semi-acoustic-guitar or ask your own question.