How does one analyze a song that moves primarily between two non-diatonic chords?

The score for 'The Simple Life' by Jerry Martin indicates three flats, which would typically mean either Eb major or C minor. However, almost the entire song just moves back and forth between Bb major and Ab major chords, ending very clearly on Bb major. The overall tonality, therefore, suggests we're in Bb major, but then the Ab major chord doesn't make sense, since there's no Ab in the key of Bb major.

I know about the Pythagorean scales and Messiaenean modes, but this song doesn't seem to fit either model. So what is the key, and how is that determined? How does one deal with a song that primarily moves back and forth between two chords that are not diatonic to each other?

Here is the first page of the score, showing the key signature and the back-and-forth movement between Bb and Ab major chords. 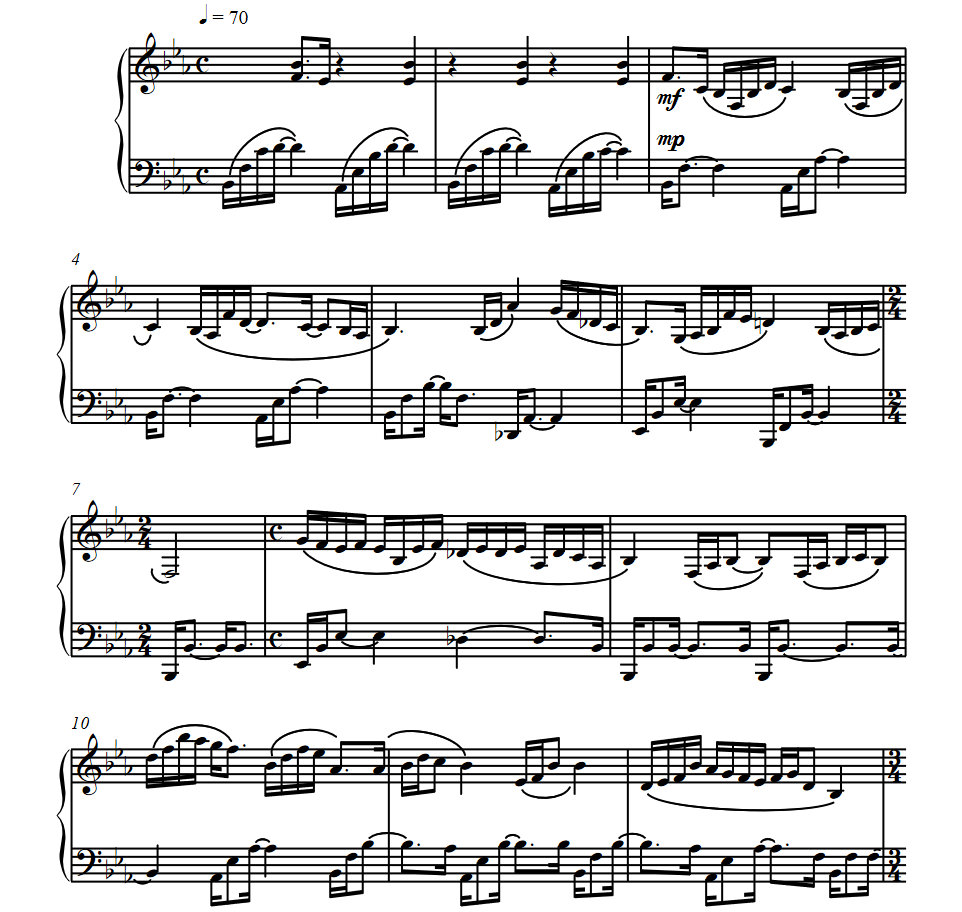 Here is a recording of the piece.

The usual question I ask when someone asks "What key is this in?" is "Why do you care? What do you want to do with that information?" In some repertoires, like a lot of "classical" music, it's very clear what constitutes "being in a key." But even there, there can be significant ambiguity. (I discussed some of the issues about interpreting an ambiguous key in an answer here.)

The piece in this question doesn't follow the standard harmony of "classical" music, though. It has a different harmonic vocabulary. Trying to shoehorn it into some other classification system according to some arbitrary ranking or rules is an exercise often more about the priorities of the particular analyst than about how the music actually works.

To spare you from the rest of my thoughts (if you don't want to read the extended discussion below), if you forced me to classify this piece according to standard diatonic modes, I guess I'd say B♭ Mixolydian, with some chromaticism (particularly the repeated extended use of the D♭ harmony). That accurately reflects the predominant scale and the fact that B♭ seems to be a local "center" that the piece keeps coming back to.

But what does it mean to be "in B♭ Mixolydian" other than the fact that there's an A♭ instead of an A♮? Is that a useful classification? It doesn't necessarily tell us a lot about how the harmony of this piece works. As I discussed in the linked answer above, a piece of music is often like a "world" that you enter into. As you listen to the piece, you learn the "language" of that world, including the harmonic language.

A piece in B♭ major in the stereotypical classical sense will harmonic progressions that you could think of in a flowchart. Most of the flow keeps going back to B♭. Specifically, a lot of harmony will go through F major (or F7) back to B♭ major. You'll see a lot of things like B♭-E♭-F-B♭ progressions, known as I-IV-V-I. Or you might substitute C minor in and see something like I-ii-V-I. And you'll also see cycles like I-IV-I and a possibly other things.

That's absolutely not the harmonic flowchart of this piece. As noted in the question, the most common harmonic cycle in this piece is I-♭VII-I, or B♭-A♭-B♭. There's no real use of the dominant F major that I heard listening through once.

What else do we have? Mostly a bunch of E♭ major chords and also quite a bit of D♭ major. These are also two major chords a whole step apart, like B♭ and A♭.

There is a kind of harmonic backdrop for a piece like this. It's a cycle of fifths going toward the subdominant side of the circle of fifths (B♭-E♭-A♭-D♭). Typically classical harmony in major keys tends to be rather dominant-side "heavy," with V and V/V appearing a lot. There are often even longer cycles of roots of descending fifths, like iii-vi-ii-V-I.

But other musical styles (e.g., some gospel influenced music) tends to go the other direction, with IV and IV/IV, and in this case even IV/IV/IV (which is one way of interpreting D♭).

I personally wouldn't interpret D♭ really that way, but instead think of the "flowchart" metaphor again. There's a lot of motion between E♭ and D♭ when they occur. There's a lot of motion between B♭ and A♭. Basically, in a similar fashion to how V/V relates to V in a typical major key, there's an E♭ subsidiary or secondary "tonic-like" area around E♭ in this piece, perhaps. (Again, the E♭-D♭ relationship is like the B♭-A♭ relationship.)

So, you can think of a flowchart that has I and ♭VII, and then there's another part of the diagram that has IV and ♭III, which can also be viewed as having a common relationship like I and ♭VII. These chords constitute most of the harmonic vocabulary of the piece, and you can draw various arrows showing the most common pathways among these chords. For example, sometimes you'll get a direct motion from D♭ to B♭, like in a IV-♭III-I motion (mm. 8-9). Rather than a I-IV-V-I cycle that would appear in a major key piece, this piece appears to use I-♭III-IV-I (as in mm. 5-6). Progressions like this recur later in the piece. They are part of the harmonic "world" of this piece.

Does this fit into a particular "mode" (e.g., Mixolydian)? Not stereotypically, but that's what the piece does. To answer the title question of "how does one analyze a song...", this is the place I'd start, by describing the general content and typical motions of harmony in this piece, particularly the emphasis on IV and the I-♭VII progressions. And you create the flowchart and go from there.

In the end, is it in "B♭ major" or "B♭ Mixolydian" or some other more arcane term for a scale? Not in the most typical sense of those terms, at least in terms of what they imply about harmonic usage. But it certainly uses a type of Mixolydian-like harmony that emphasizes ♭VII in a way I've seen in other pieces. I don't know a specific name for it, but describing the types of motions of harmony here is more interesting (and more like "analysis") than simply trying to put a scale label on it.

EDIT: I just realized that this question has been reworded by edits and originally asked "what key" the piece was in rather than how to "analyze" it. I think I still tried to answer the "what key?" question here, but the bit about analysis may have gone further afield than the original question wanted. Still, to me, the question we should be asking is how to describe the musical features (like harmony, melody, etc.) of a piece, rather than worrying about how to stamp a label on it. So I'll leave my answer as-is.

Because the song starts, ends, and continually revisits Bb major, I would analyze it as being in Bb major.

The Ab major chord is borrowed from Bb minor. Borrowed chords are not (necessarily) considered to change the key, and here it clearly is just serving to move toward and away from Bb, reinforcing it rather than subverting it.

The key signature is a matter of convenience. Because Ab is used so often, whomever wrote the score decided to include Ab in the key signature rather than using the Bb major key signature and then adding flats to every A in the piece.

It is tempting, because Ab is so consistently used in place of A natural, to consider the piece as being in Bb mixolydian, which shares its key signature with Eb major. However, I don't feel that analysis reflects the overall sound of the piece, which I hear as major, not modal. Bb Mixolydian reflects the literal notes played, but not the overall sound created.

A similar question involving a song that moves back and forth between two chords not diatonic to each other, but which results in a different answer, is What's the most useful way to think about a song that progresses from C to D and back again?

Not the answer you're looking for? Browse other questions tagged theory scales analysis or ask your own question.

18
How come songs in a certain key play notes not in that key
6
Can a song be in both a major and minor key at the same time?
1
What's the most useful way to think about a song that progresses from C to D and back again?
1
Can a song contain pitches outside of its intended key?

4
"I-vi" in Major or "III-i" in Minor?
2
How to work out the key of a song which has a few of the same chords of more than one key
1
Chords with different bass and non-diatonic chords inside a progression
3
Questions on the harmonic analysis of Pixar's Up Main Theme
2
Guidelines for finding tonality/key of a song
4
Diminished seventh spelling but functioning as an Augmented Sixth?
3
How can one analyze the chord progression from "Your Affection (from Persona 4 soundtrack)" by Shoji Meguro?
3
Does a melody ending on the 6th degree mean that the section of a song is in aeolian mode?
3
Strange out-of-key chords in Blow by Beyonce?