Why does 1/1 time signature exist

Examples of 1/1 used in a score

Elgar's "Enigma" variations use a 1/1 time signature for variation VII, which is in a fast (presto) 4. He certainly could have written it as 4/4 or 2/2 — the notation would be exactly the same — but by indicating 1/1, he's making a clear statement to the conductor and musicians about the feel: both 4/4 and 2/2 are felt as having two main pulses per measure, Elgar wants only one.

Here are the flutes, mm. 1–8, extracted from the full score (on IMSLP).

Borodin does the same thing for the same reason in this second symphony. Here is again the flute part from the opening of the movement (IMSLP), marked prestissimo.

The larger question: why 1/X?

In a sense, there's nothing special about 1/1 other than the question of "why have only one beat in a measure?"

To reinforce the sense of a fast tempo: as explained above.

When an "extra" beat is needed, or beats are skipped: In Poulenc's first Nocturne, there is a single bar of 1/2 time (m. 27). The piece is in 2/2, but this "extra" beat is needed to complete the phrase of that moment. Adding the beat to the previous bar — making a 3/2 bar — won't do, because a feeling of a downbeat is required. However, a second beat in the measure would prolong the phrase awkwardly. 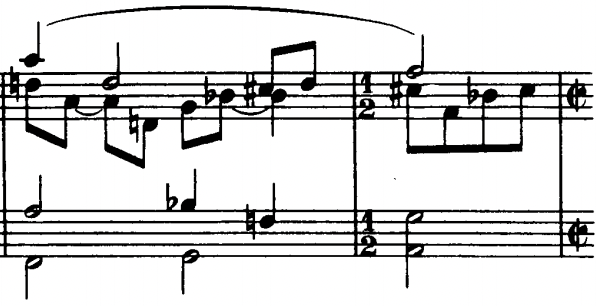 Wikipedia has a list of pieces with 1-based time signatures.

Not the answer you're looking for? Browse other questions tagged theory notation time-signatures or ask your own question.