When Fux laid out his rules for counterpoint, he did so primarily in terms of melodic (horizontal) movements within each voice and secondarily in terms of harmonic (vertical) relationships between voices.

(Now, a leap, without attempting to draw a direct connection...)

By contrast, continuo players tend to think in terms of patterns of intervals. See @Athanasius's outstanding answer to Did continuo players consider figured bass as “interval symbols” or “chord symbols”?.

Have there been attempts to codify Fux in terms of characteristic progressions of vertical intervals (i.e., combining the Fuxian view with the Continuo view)? If yes, what "rules" or "rules of thumb" can be discerned?

When I tried to study Fux's The Study of Counterpoint in earnest, I was doing it on my own at home. (It was way past college year, and I had only taken a few music courses.) I wanted to follow along with the text and do all the exercises that Josephus did. The problem was I didn't really know how to judge my work.

So, I decided to analyze all of Fux's examples of relative motion in the first chapter, note against note, in two parts. I figured as long as my relative motion choices could be found in the examples Fux gave in the chapter, then I could consider my work OK. 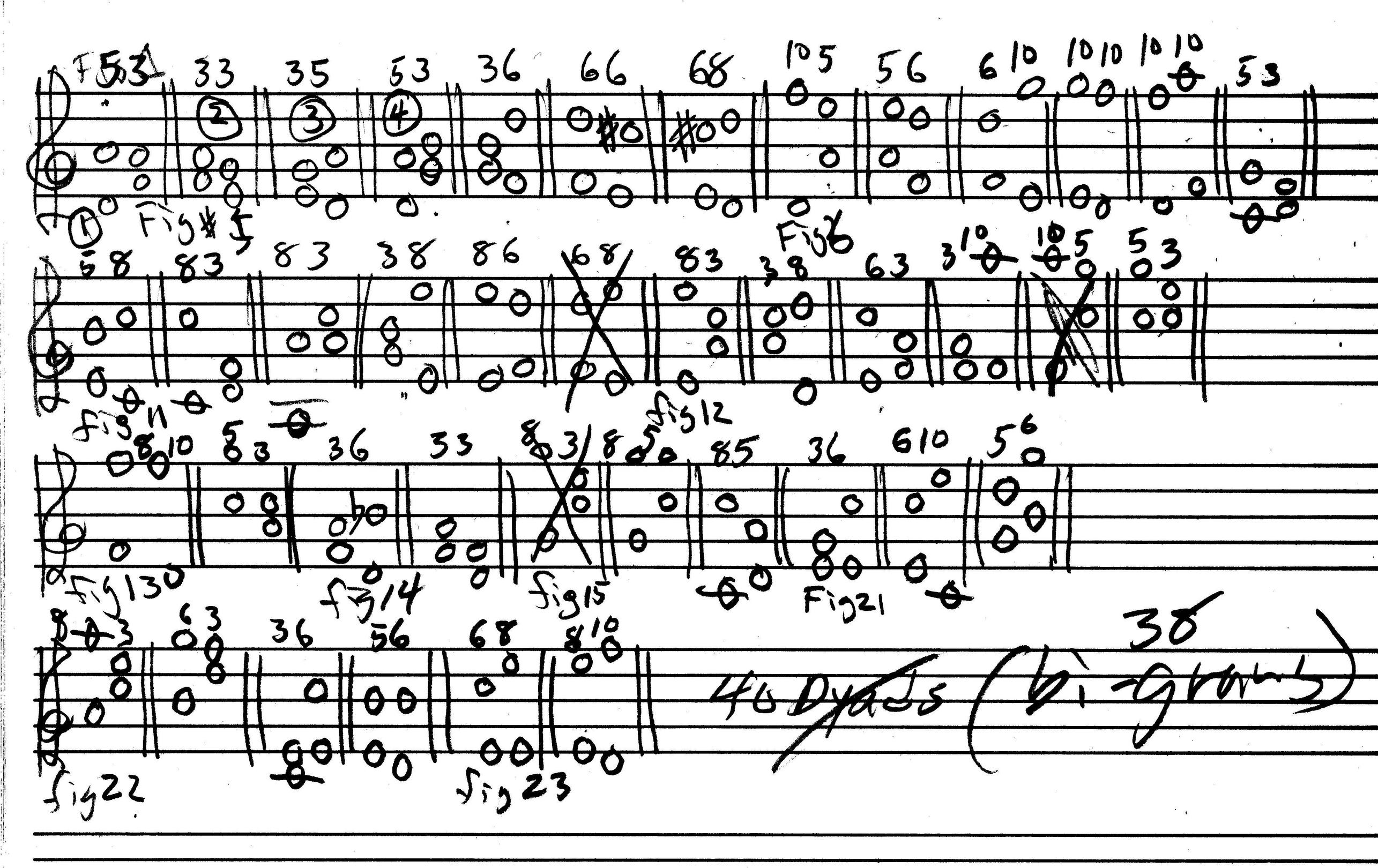 I put figure numbers on the table to match those of the translation by Mann. Notice how there are fewer bigrams listed for each figure. That is because when a bigram repeated I didn't add to the table again. I had to "X" out a few repeats I didn't catch the first time through.

Above the staff are numbers like 6 8 which are the intervals of each harmony. This matches how Fux analyzed the counterpoint in his examples. Those numbers are helpful on a basic level. For example, 5 5 will be prohibited parallel fifths. 3 3 will be parallel thirds which are OK provided you don't do it too much. 3 3 3 3 for example would be a problem, because Fux demanded more harmonic variety.

It's interesting that some of relative motion can be understood just by the knowing the succession of interval regardless of melodic aspects - 5 5 is bad regardless of the melodic steps - but there are many ways such generic intervals can be realized melodically. In some cases all possibilities seem OK, but in others you must watch out for problems. To see this better I made a second table grouping bigrams into generic interval successions... 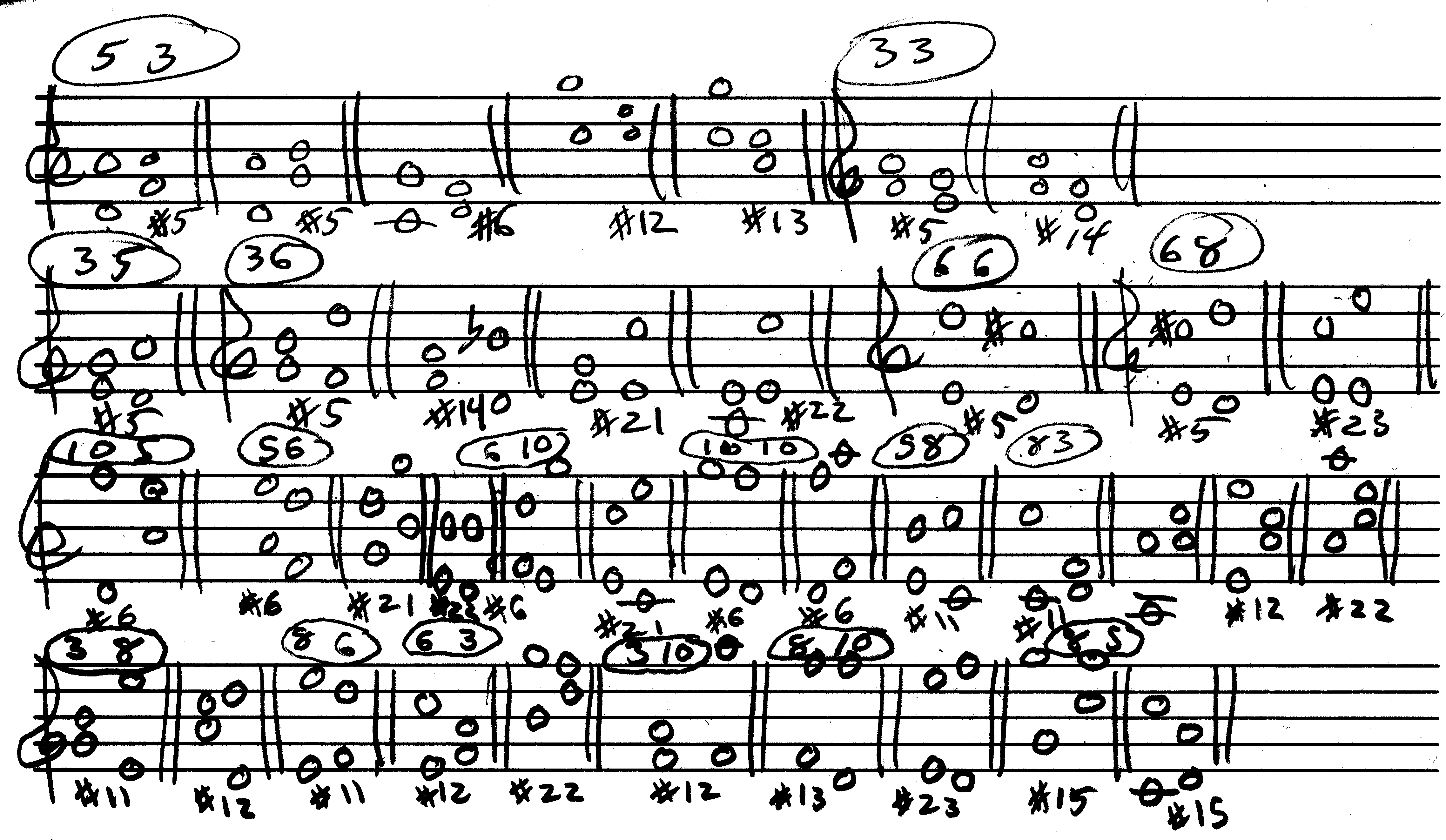 Then I started to think more comprehensively about relative motion. For example, what moves can you do from 3 3? You don't need a lot of harmony study to learn that any kind of motion to a third is always OK, but from another third it will always be parallel motion. Categorically it cannot be similar, oblique or contrary (diatonically speaking, a minor third to a major third by oblique motion doesn't count, it's sixteenth century harmony not the blues!) That means 3 3 is very limited in terms of its contrapuntal variety. Compare that with 8 3. Again, we know that any motion type can move to a third, but when the motion is from an octave there is actual potential to do it with a variety of motion types. It can be similar, oblique, or contrary. Categorically it cannot be parallel.

From that point I started to ask myself: "can I list out all the theoretical possibilities of relative motion for a give interval pair?" and "can I possibly reconcile that with Fux?" The interval pair 8 3 is a good example to work from.

Fux gave only these four moves... 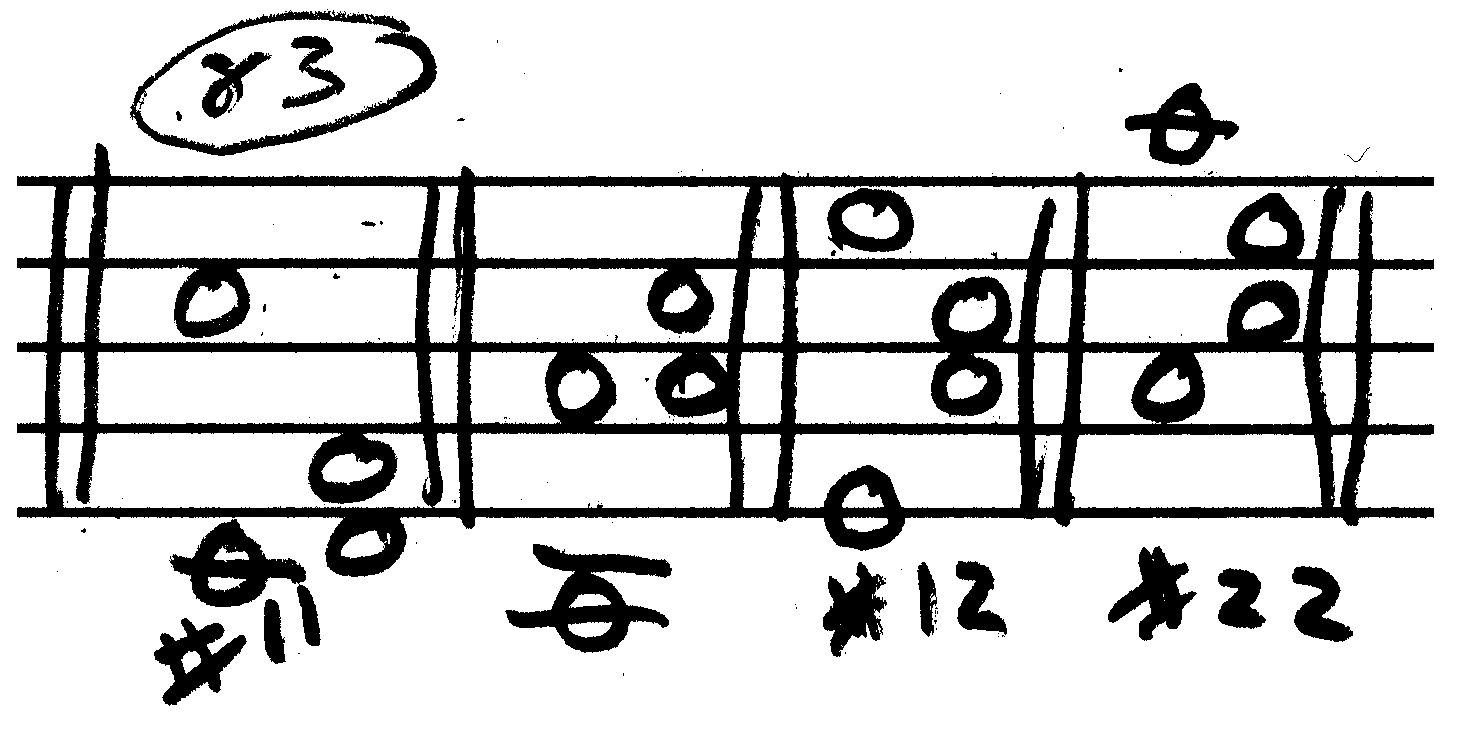 ...but within the constraints of diatonic tones, no voice crossings, and the categorical impossibility of parallel motion, the theoretical possibilities are...

...ten total movements rather than just the four from Fux. Do all of those reconcile with Fux? I think so. Fux gave 3 of the 4 contrary motions, filling in the one missing just ends up showing us there are two movements and their inversions. Fux provides no example of oblique motion for 8 3, but in other pairs he gives 5 3, which is nearly the same, a perfect consonance moving obliquely to a third. Also, Fux gives 8 10 obliquely which is also nearly the same, only the simple 3 is a compound interval 10. Similar motion is the tricky one. Fux shows both voices leaping up, but not the top voice stepping up to the third. There is such an example for the pair 5 3 where the top voice steps up and the lower voice leaps a fourth. But with 8 3 the problem seems to be when the top voice moves up by step the lower voice must leap up a seventh to form the third. I'm pretty sure that melodic leap is not in Fux's style.

I'm not sure if inverting all movements will be stylistically correct. In footnotes Mann mentions that leaping up a minor sixth is the size limit (not counting octave) but when leaping down a fifth is the limit.

I made notes for myself on other points, but I never took this relative motion bigram idea any further than this. It was pretty tiring! But it did give me a practical table that I could use to proof my exercises. More importantly it made me think much more comprehensively about relative motion and how I could explore what potential for variety comes from some given material. And I think this gets to the heart of what counterpoint is really about. It certainly helped me break out of thinking of voice movements in homophonic terms. Instead of seeing something like... 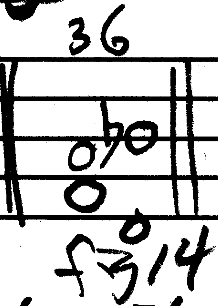 ...and thinking I IV6, it's more like: I can take 3 6 and use it again, but using oblique or similar motion, or any of the various inversions.

This also reinforced something I had already learned:

Not the answer you're looking for? Browse other questions tagged intervals analysis counterpoint or ask your own question.

6
Did continuo players consider figured bass as "interval symbols" or "chord symbols"?
3
Why might two jumps in contrary motion be avoided?