What is the order of operations for writing half notes against whole notes in three parts?

FYI, I am referencing The Study of Counterpoint (Alfred Mann's translation of Fux's Gradus ad Parnassum)

When writing in two voices, I understand the standard procedure to involve writing a counterpoint line to a given cantus firmus.

For three voices, however, Where does one begin? All of Fux's examples are entirely complete--he does not break down the part-writing into steps.

Also a source of confusion for me is the fact that Fux holds that "the harmonic triad should be employed in every measure if there is no special reason against it." As you will see in the following image, there is actually no complete triad in his Figure 124 (from the section on Half Notes against Whole Notes in Three Parts). I will include my notes on this exercise so you can see how confused I am... 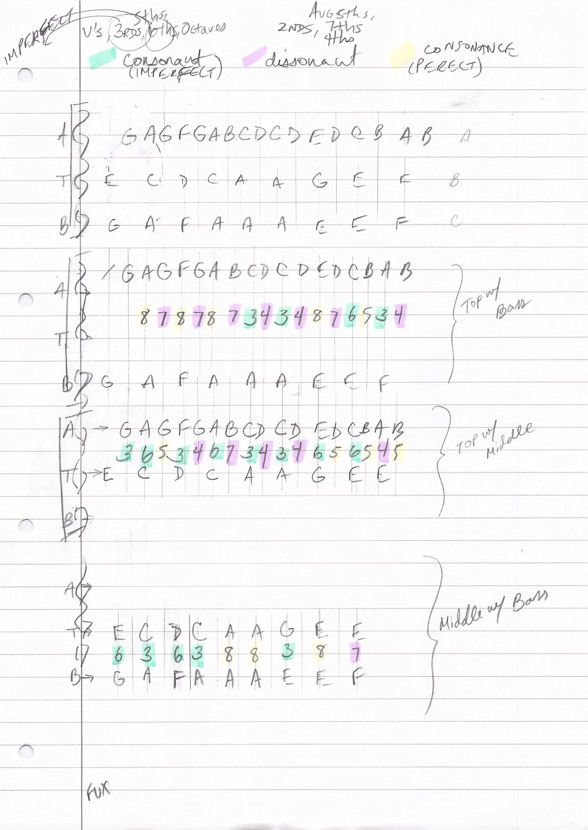 The following image shows the figure as it appears in the text i'm working from: 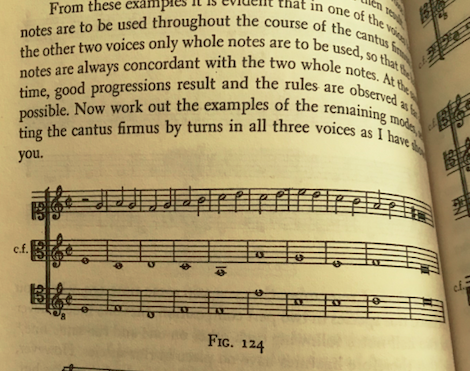 There isn't an order of operations for adding the counterpoints.

It might be better to think of what the permutations are for the various possibilities and proceed from there knowing that in music you usually have three or more choices for harmonic possibilities from which there is no right or wrong selections.

Keep in mind that if you do what Fux says suggests as idea in the text, use all complete triads, then in three parts and given a cantus firmus, when you choose to move one voice the tone for the remaining third voice is already determined by process of elimination. For example, if the c.f. tone is E and you harmonize it with a G, the third voice must be a B, but if you harmonized the second voice using the B the third voice must be the G. In a way you really only have one choice to make.

The big caveat is that you don't want to put the fifth of the triad into the bass. This reduces the number of possibilities and so makes the choosing simpler in a certain sense.

Consider the opening two bars. Fux harmonizes the first chord with a unison, but let's say that from that point forward will will use only complete triads. The c.f. moves from E to C and the C can be harmonized only as three complete, diatonic triads...

...the middle stave shows the c.f. C harmonized with tones above and below for the three possible triads. (In modern terms it just root position 5/3, or inversions 6/3 or 6/4.) The whole notes with x are to show choices to avoid, because it puts the chord fifth in the bass. I then write out the four possibilities starting with the tenor moves. I choose tenor simply because it's the voice with some limitation that eliminates choices...

...now that the c.f. is harmonized with a second voice, there are no choices left for filling in the alto, simply fill in the required third triad tone...

Then just keep doing the same thing for the other bars of the c.f.

Keep in mind the basics that Fux already laid out:

You don't literally need to make a table of permutations for each bar. This example is just to show there are several viable possibilities to choose from and moving just one voice determines the third voice. You can try just arbitrarily moving one voice and then fill in the other voice. Mind the bullet points above. Don't worry about harmonic progression in the ii6 V7 I sense, because this is counterpoint! You want...

Your confusion is understandable because the example you have included in the question is transcribed incorrectly. In particular, the lowest voice should start on E (E3, to be precise) rather than on G2, so everything should be a sixth higher. The notes given here would be correct if the clef were the modern tenor clef (that is, the treble clef 8va bassa). The original example may be found on page 97 of the 1725 edition.

The example given here also omits the final chord, where the soprano has a G sharp, and the tenor has an E. In the mistranscribed version, that would be a bass G, which surely anyone ought to recognize is not possible in Fuxian counterpoint.

The Study of Counterpoint, by the way, is Mann's title, not Fux's, which was Gradus ad Parnassum.

much of the information I was seeking is covered in this page: https://academic.udayton.edu/PhillipMagnuson/soundpatterns/speciesctpt/spI3.html

The following are the contents of the page:

a. Due to the added complexity of the third voice, repeated notes may be used; restrict them to one pair in any one voice per exercise. They must never occur simultaneously in any pair of voices, as in the example above. Note the repeated notes in the soprano line.

b. All other melodic principles (from Species I in two voices) are the same.

a. The first and last intervals below a cantus firmus must be a unison or an octave.

c. Complete triads are preferable. Major and minor triads are used in either root position or first inversion

Diminished triads can be used, but they must be in first inversion Do not use augmented triads or second inversion triads at all

d. An incomplete triad may be used if the line is made better because of it.

If an incomplete triad is used, at least one of the intervals formed must be imperfect (a 3rd or a 6th); if all the intervals were perfect, the counterpoint would sound as if it were forming a cadence. The first and last measures, as the starting point and cadence, are exceptions to this.

f. Parallel perfect consonances are still prohibited, including those between the upper two voices.

h. While parallel P5's are not allowed, a P5 may move to a d5 at any time. A d5 can only move to a P5 between upper voices if both triads are in first inversion.

i. Unisons are allowed between any two adjacent voices.

j. Never double the leading tone at a cadence.

These are only three of many possible cadences. Locate the ^7-^8 and the ^2-^1 motions in each.

l. The upper two parts must be an octave or less apart; the lower pair, a twelfth or less.

m. All three voices may not leap in the same direction at the same time.

Simultaneous leaps in all voices reduce the independence of the lines.

n. All other contrapuntal principles are the same as for two voices.

The four big questions to ask yourself when writing species I counterpoint in three voices:

Is this note good for the line? You need to have good knowledge of all the melodic principles to answer this. If it is a perfect consonance, how has it been approached? If it is a dissonance, how is it justified? Is the cadence a clausula vera? There are some extra conditions that need to be examined, but they involve lesser questions. These include issues about

Not the answer you're looking for? Browse other questions tagged composition counterpoint species-counterpoint or ask your own question.

3
1st Species Counterpoint Tritone Reached Melodically by Step
3
In Fux's Gradus ad Parnassum, why is the B always flat in the exercises done in the F mode?
3
What is the purpose of voice-crossing here?
5
Is this a hidden consecutive fifth?
5
Counterpoint (Fux): 3rd species, 3 voices, closing formulas
6
Rules for building cantus firmus in Fux
2
Another Counterpoint Dissonance Handling Question... Species Counterpoint
2
Is there a rhythmic counterpart to voice leading? Is counterpoint supposed to fulfill this role?
1
how do I add voices to compound species lines?
3
What are some strategies one could use to put as many suspensions as possible in a chord progression?