Are parallel 5ths 8tvs allowed between beat 4 and beat 1 of new bar?

I am working in a grade 4 melody writing exercise textbook and it says that you should not have parallel 5ths and octaves on the upbeat before the new bar and the 1st beat of the new bar. It was my understanding that parallels dont sound good only when they are on consecutive downbeats and that they can be used on upbeats because of their weaker metric positioning. Can someone please clarify? 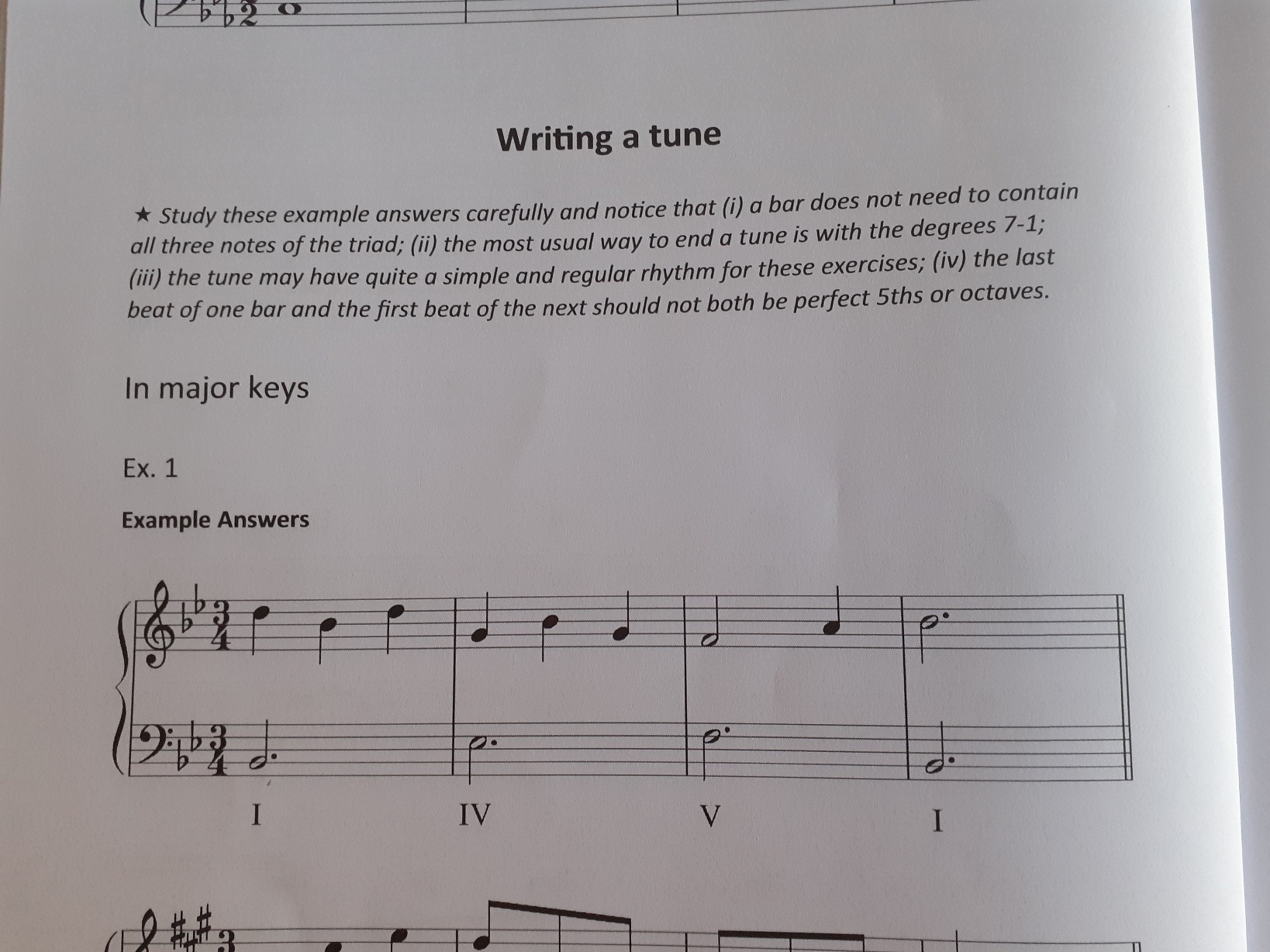 I wasn't going to answer as @Phoog's simple reply was enough, but then I read the comment about the Piston Counterpoint example.

The fig. 126 from Counterpoint you gave as an example in comments is presented in the text as: "Following are examples of such consecutive octaves and fifths." The operative word being "such", referring back to fig. 124, which is a table of 9 examples of consecutive perfect intervals in various rhythmic and melodic contexts.

Fig. 126 is given as either an example of good or bad. It's just a real example of many ways consecutive intervals can be encountered. It is an example of (g) from the table in fig. 124. Piston's comments on that are:

...On the other hand, the formula at g seems to be open to question. It is used by Bach and others, and its acceptability appears to depend upon the rhythmic importance of the off beats.

Now that we have digested the Piston text we can return to your question.

Are parallel 5ths 8tvs allowed between beat 4 and beat 1 of new bar?

Piston's table in fig. 124 has only one example crossing a bar line with (i). We can broaden the picture a bit and say categorically crossing the barline is a movement from a weak to a strong beat. Fig. (e) sort of gives us that, as the first octave is on weak beat 2. But, both (i) and (e) put the second octave not on the strong beat and instead after the strong beat. Unfortunately we don't have a perfect example. But, Piston says (e) does not excuse the parallel movement while (i) does, because (i) present more rhythmic difference between the two parts.

IMO, from Piston's examples, parallel, perfect intervals crossing the barline is generally not acceptable. Certainly if the question is asked without any qualification it is not acceptable. If the idea is "crossing the bar line mitigates parallel, perfect intervals", that is certainly false. You can probably generalize that an say "any parallel movement to a strong beat will accentuate the parallel movement." And that will undermine the contrapuntal sense of melodic independence. If you do it, make sure something other than melodic contour accentuates melodic independence, the obvious choice being to make the line rhythmically independent.

Another point should be made about rhythm, meter, and these examples. In fig. 124, g the weak beats are full beat durations, while fig. 126 put the parallel octaves after both strong and weak beats with only a sixteenth note duration. Longer rhythm values are a basic way of creating metrical accent. So, teaching example (g) accentuates the parallelism more than the real example in fig. 126. The OP question is a bit unclear on this nuance of duration.

Back to my point about cherry picking examples. If you are teaching yourself, you need more intellectual rigor when reading texts, not less. Read carefully and be a harsh critic. That doesn't mean you can't write parallel harmony any way you want. Do it, but own it. Don't pull out Piston and Bach to justify it out of context. If you want to write like Bach or Haydn, etc. be very careful about the voice leading conventions they used.

In the traditional rules of voice leading and counterpoint, parallel fifths and octaves are forbidden regardless of where they occur.

I'd like to point out that that's not quite what the textbook says. It's offering some general guidelines, not hard rules (you will certainly find "tunes" that end in other ways than ^7 -> ^1). It says that first and last beats should not both be 5ths or octaves, regardless of parallelism. In the printed example, the downbeat of the third bar is an octave between the Fs in the upper and lower voice, but the preceding beat is a 9th. They're saying that it would not have been ideal if that preceding beat had been a fifth, or another octave even if the motion were not parallel.

One of the main reasons for avoiding parallel 5ths and octaves in 4-part writing is that it causes the two voices in question to temporarily lose independence and sound like one voice. The 5th and octave are strong fundamentals, so when you add parallel 5ths/octaves, the upper voice sounds like it just disappeared. But that's not to say they were never used.

Parallel 5th/octaves are generally avoided no matter where they are, but if you can break up the parallelism even momentarily, in a suspension for example, you regain voice independence, and is generally accepted.

An excerpt from The Craft of Tonal Counterpoint (p. 45) by Thomas Benjamin: "Parallel perfect fifths are not found in [Bach's] music, nor are fifths by contrary motion. Further, fifths on successive strong beats (or strong parts of beats) are not used, though fifths falling on successive weak beats (or parts) are possible." According to Benjamin, parallel 5ths falling on weak beats are allowed; however, it is a rare occurrence in counterpoint. In general, he says that successive perfect consonances should be avoided. 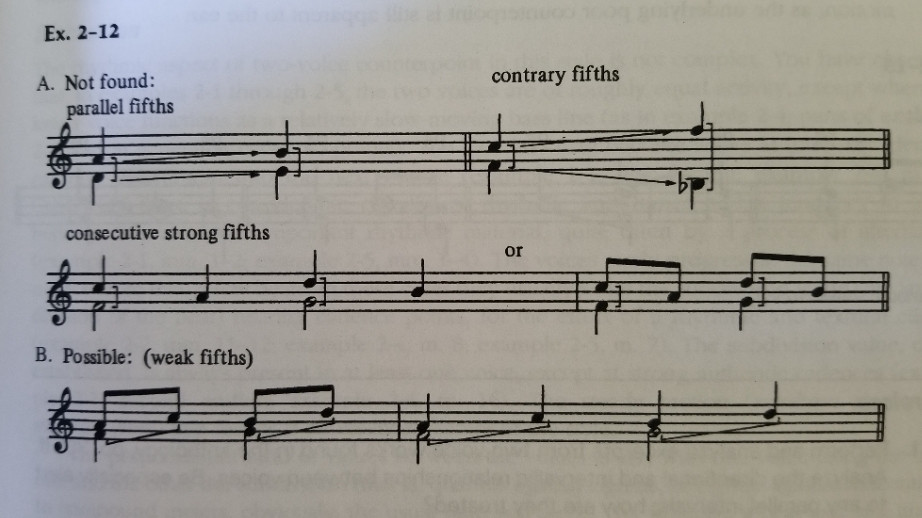 It's important to start with an understanding of timbre. If you have access to an old organ with multiple stops, you know that by reinforcing overtones, you can change the quality of a sound. Octaves make a kind of flutier sound, and 5ths make a slightly buzzier sound, and so on.

When you play multiple perfect 5ths in a row, the 5th acts as a temporary timbre of the note below it, rather than as fully functional part of its own. It doesn't matter whether they are on an upbeat or a downbeat.

7
Is staggering fifths a good way to avoid parallels?

4
Difference between Fantasia and Rhapsody?
8
Why in the study of counterpoint by johan fux are minor sixths allowed but not augmented fifth?
11
Are augmented fourth allowed in second species counterpoint?
30
How do I get out of my song writing rut and compose something new and fresh for a change?
2
Are parallel octaves okay in other styles of music?
0
Where do we draw the line between a new composition and an arrangement In folk-themed pieces?
3
timing of a bar where it's 3/4 for a bar and 4/4 for the next?
10
What is more important, avoiding parallel octaves between non-chord tones, or keeping a stretto exact?
16
What is the difference between a duet and a duo?