Why do many classical guitarists move the fingers for vibrato like a violin?

I have seen many videos where it looks like the guitarist is doing some vibrato and they make a rolling motion like in a violin, cello...

How can this work in a fretted instrument? As an amateur in both instruments, I don't know how can that work on a guitar.

I made a sketch of my understanding: 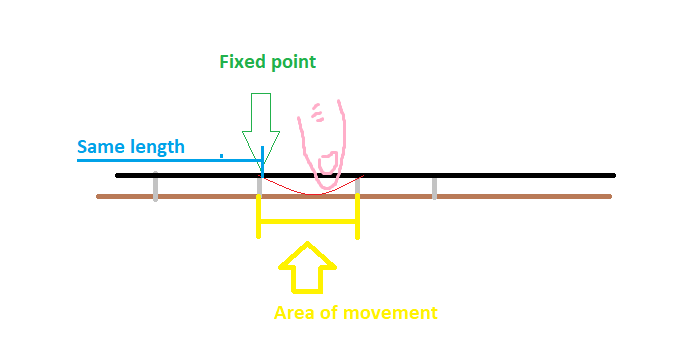 As far I understand, the length of the string (blue), pressed over the fret (green), should be independent of the point where the finger (pink) is pressing inside the pressing area (yellow).

UPDATE: I find it hard to pick an answer as I think most of them are really good. So, if I understood correctly:

The change in pitch is done as follows: The increase in the position of a fixed point in the string (which means higher tension and therefore higher pitch) represented by the red d): 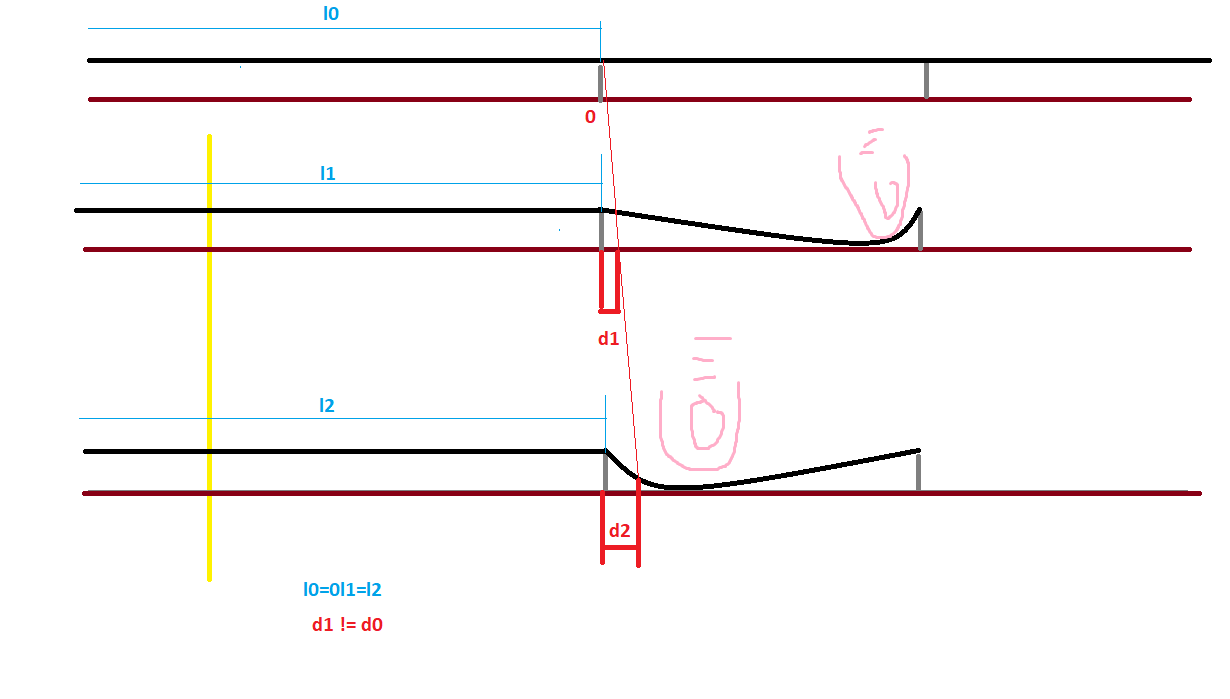 This would also mean that the vibrato goes in the opposite direction than the violin or other non fretted instrument right? Because usually you get the note in the right pitch and then start moving your arm away and therefore your fingertip (lowering the pitch) to then go back.

While according to this graph you would start in the position more "far away" and then close the gap. Right?

PD: The picture is exaggerated to show the two positions, usually you would reach both ends without lifting the finger.

On both fretted and non-fretted instruments, the vibrato works as a combination of change of resonating length, change of overall length, and change of tension. Many musicians simplify things when they describe how it works, and highlight only one or maybe two of these aspects. The reality is a bit more complex :)

Now, a string is a spring. If you press sideways on any linear spring constrained at the ends - be it a piece of wire, or a helical spring from a pen, you make the spring longer. Same happens to the string: it gets longer if you press on it. It happens whether you press it down towards the board, or laterally.

But, obviously, on a fretted instrument, you not only bring the string down onto the fret - that already stretches it, but you then bring it further down towards the fretboard, making it even longer. This increases the length of the string, necessarily increasing its tension (unless the tuning pegs are loose).

You can see how the string stretches on the diagram below. Imagine that the string was painted in two sections, converging right above the fret when the string is free. 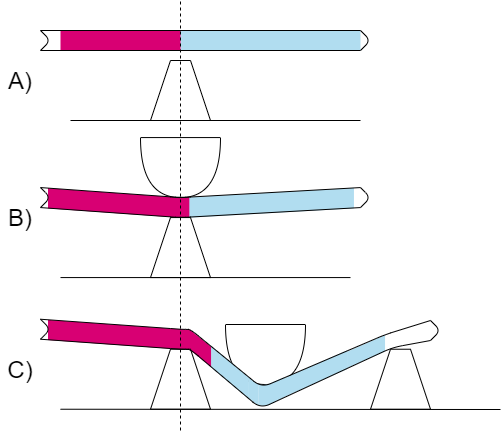 As the string is pressed down, the left (purple) part of it stretches past the fret (compare A, B and C). This is in spite of the length of the resonating string being largely the same in all three cases.

Now, when there's a nearby fret, the compliance of the string to lateral deflection (towards the fretboard and/or sideways) isn't constant like it would be in an unfretted instrument. The closer to the fret, the less compliant the spring is. And what does it mean? Suppose you deflect two identical springs the same amount: the more compliant one will experience less tension (tensile stress) than the more rigid (less compliant) one.

Of course the compliance of your finger also plays a role: the less compliant it is, the more it emphasizes the change in string's compliance towards the fret. Heavily callused fingers produce higher vibrato pitch range for the same range of finger motion.

And of course, we've only mentioned deflections toward the fret/fingerboard. You can also, additionally, deflect the string laterally, to further increase the string tension. And the vibrato can be a combination of rolling motion and sideways motion of the finger. 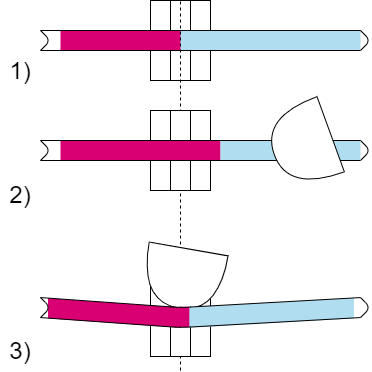 The length of the string is truly not changing, but there are other things that affect the frequency of the string vibrations. One is the density of the material (obviously this is not what vibrato changes), another is the cross-section of the string (ditto). The last one is the tension in the string. And that's what's being used here.

Essentially, you periodically pull at the string more and less, which periodically adds a bit of tension, and that results in the change of the pitch. (The tuning pegs on the guitar and other strings work in this way as well: by turning them, you add/reduce tension and that makes the pitch change.)

This is also definitely playing its part in vibrato on unfretted instruments; however I don't play any, so I don't really know which part of the vibrato on these instruments is due to what.

On classical guitar (electric and acoustic players also use it) the action of rolling the finger, within the confines of the fret it's in, causes the tension in that string to change. Roll the fingertip towards the guitar head, and the string's tension increases, roll towards the bridge, it decreases. Albeit slightly. There's also a slight change of tone. You're correct - the length of the string doesn't change - it's still from fretwire to saddle.

Compare that with the lateral movement used by electric guitar players, which stretches the string even more - a semitone or tone variance is quite common. Because the string is also being dragged across the fretwire, it increases the sustain, not really a phenomenon produced by the 'classical' vibrato.

Already good answers, but I think I can add some info.

[I can think of at least two ways to do vibrato without the fingers: by subtly bending the neck and by using the erroneously named “tremolo” bar. But these are not relevant here.]

With this kind of vibrato, the string doesn’t change length, instead you are changing the tension in the string. As you “pull” the string to the left the tension increases and the note goes sharp, as you “push” the string to the right the tension decreases and the note goes flat. This is similar to how vibrato is done on bowed string instruments (e.g. violin), but it is not the same. On violin you roll the finger from side to side, which does make the string length change, and hence changes the pitch this way. With this style of vibrato on guitar, the finger remains perpendicular to the neck, and the whole hand moves side to side; the finger doesn’t roll. (Incidentally, I often refer to this kind of vibrato to pupils, as “violin-style” vibrato - maybe I shouldn’t!)

Lastly, it is worth mentioning why the “bend-style” and “sideways-style” vibrato are both used on guitar. Basically, they sound different and work better on different kinds of guitar.

Firstly, the sound: bend-style vibrato always makes a note slightly sharp. If you think about it, whether you bend a string upwards or downwards (towards floor or ceiling) the pitch always goes up. This makes this kind of vibrato less reliable tuning wise, and so maybe more suitable for electric guitar styles, e.g. Blues, Rock etc. Basically, it is less subtle. Whereas, side-to-side vibrato periodically goes above and below the main pitch. So on average, the note stays at the same pitch. This is more natural, more subtle, with more reliable tuning, and I would say more suited to classical music. It is more like the vibrato a singer would use.

And these usages match up well with the kinds of instruments broadly associated with these styles too. Bend-style vibrato doesn’t work very well on nylon strings; hence why side-to-side vibrato works better on classical guitar. Either work well on electric or steel-string acoustic, so the choice is more about sound and style. I would guess bend-style vibrato is more commonly used on electric and acoustic, but this is not a scientific observation!

Here's the part of string that does change the length — it's within the fret that's pressed. It's not the part that resonates, but by making the string stretched, more tension is on all of the string length. 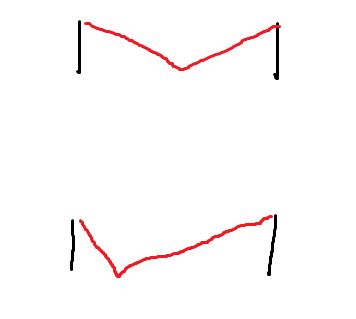 That being said, it's quite a subtle vibrato and to get anywhere near an expressive vibrato with a technique like this, one would have to apply the finger not between frets but behind the nut.

Btw the usual vibrato technique on the guitar also works by stretching the string. By bending it upwards, the resonant part even gets slightly longer, but the increased tension is what makes the pitch higher.

That's how vibrato is made. You pull the string longitudinally. You get vibrato towards both sharp and flat and it is not very deep (generally, less than half tone).

The possible vibrato approaches are bending (the tone always going sharp) or a dedicated vibrato machinery that is present on electric guitars.

One can even bend (non-destructively) or shake the whole (electric!) guitar and get more than a tone flat or sharp. Don't try this with an acoustic guitar, it will break.

To answer the question of why this is done, the fretboard on a classical guitar is flat and it's easy for a nylon string to fly out from under your finger if you try to do bending vibrato like on an electric guitar.

The other answers are great but I have to chip in because an obvious piece is missing in all of them.

You can see guitarists vibrato in all styles of music. Here's the kicker: a guitar vibrato isn't usually completely horizontal -. It's usually a bit diagonal / or circular o in motion. The difference is a vertical bend in the string.

Vertical bends of the strings will raise the pitch. I'm sure you've seen the stereotypical blues guitarists doing big bends with their eyes closed and a face of nearly constipated concentration.

P.S. You made me pick up a guitar and see how I do it. I mostly make a tiny oval.

All of these answers seem correct. Sonny Edwards might be able to confirm, but for me, every classical guitar I've ever played the strings seem to roll or twist when you try to use vibrato, which feels horrible and makes me feel like I've lost some control. Maybe that also has something to do with it.

If you are pressing on the fret itself (not between frets) rolling in the direction of the fingerboard definitely works. It's identical to what you would do on a fretless guitar (or violin, or other instrument for that matter).

Rolling sideways works when you press in between frets because even though the fret is still pinching the string, the extra length from diagonal ealignment changes the tension.

1
How to do a vibrato with a piano?

41
How not to touch neighbouring strings?
2
Vibrato on violin(with double jointed fingers!)
6
How is pitch controlled when executing a left-hand pizzicato on a violin?
4
How do you play vibrato on the Violin?
3
Am I correctly approaching the relationship between string bending and action height?
2
How does the ear pick which note to hear when hearing guitar vibrato
7
Violin vibrato without shoulder rest
7
When to vibrato on the violin
3
Chords in Rachmaninoff's 2nd piano concerto
8
Why do guitarists move fingers up and down on the same note?