How to notate a minor chord with added 4th

In C major, notes are G-D-F-A- (G is in the bass). How would one notate this chord? The G is not a pedal tone nor a passing tone. The first time this occurs there is a C pedal tone that is left over from the section before, the second time this chord occurs there is no pedal tone. I'm looking specifically at the last section of Appalachian Spring, measure 621.

My only guess is that is a D minor chord with an added 4th...?

This is the score in question: 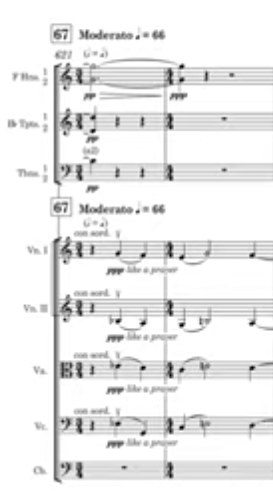 And this is my attempt to translate it to clefs I'm familiar with: 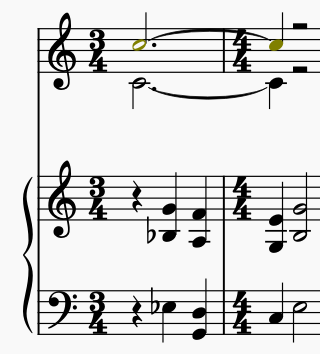 It should be noted that the whole structure is kind of harmonic ornamentation of the C chord (which precedes this section). Assigning a chord symbol to every vertical structure might be a bit of an overkill. But let's try anyway.

For a chord containing strictly the notes G-D-F-A there are in general three possibilities:

The fourth possibility is suggested by Tim: Dm11. It means a D-minor chord with added 11 (F), which also may contain flat 7 (C). And guess what, horns are holding that C! so it's not bad choice either

My choice would be Dm/G or Dm7/G (thus including C), because it's the most compact symbol, and indicates the bass note.

As mentioned by user1079505, sometimes labelling every vertical assembly of notes isn't useful. The overall structure seems to be a C-minor seventh, C-Eb-G-Bb, chord decorated by an incomplete G9. The dissonant notes seem to proceed stepwise (for the most part) between inversions of the C-minor seventh.

You could make an argument for G9 or Dm/G.

The main argument for Dm/G is that's, literally what's happening, you have triads moving in parallel over a bass line. The main argument against would be that the bass isn't exactly independent in a voice-leading sense, it mostly follows the chord roots in parallel octaves, and moves to this one breakaway in similar motion to form a perfect fifth against the same voice; perhaps the bass just "blends in" too nicely to confidently label it a non-chord tone like that.

5
What is this chord (spelled 2nd, 4th, 5th) and how is it used?
13
Do some measures get no numbers, in an opera score?
0
How do I write notation for multiple voices?
13
How to play these overly extended intervals on piano?
4
How to notate a Da Capo al Fine and fade (or Repeat and Fade)?
5
How to notate popular/contemporary song structures?
6
Writing piano music: play top staff 2nd time only
5
How to deal with chord vii of a key?
6
How do you notate a tremolo of indeterminate length?
8
How to notate an arpeggio that anticipates the beat